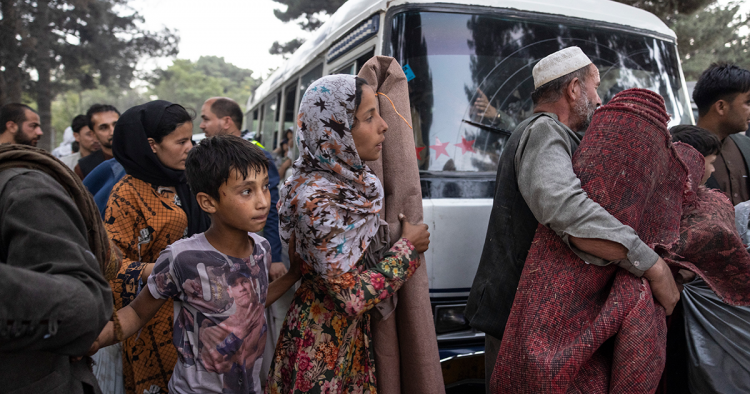 The images of desperate Afghan citizens trying to leave their country, beyond highlighting a massive human tragedy, may become a symbol of the so-called war on terror. Many of those Afghans already understand the feeling of abandoning their homes, because their families experienced it. They know what happens when foreign armies withdraw from their country and the tragedies that can ensue. The difference this time, however, was the deadline — only a few weeks. The Taliban took over Kabul with surprising speed; in the worst-case scenario, the capital was expected to fall within six months.

In 1979, the West sought the collapse of Afghanistan’s Soviet-backed communist regime. Afghanistan witnessed internal clashes between communist parties that replaced each other, prompting migrations and displacement. A civil war, followed by the Taliban takeover, added to the growing wave of Afghan migration abroad. The U.S.-led occupation of Afghanistan brought millions of Afghans home from around the world. The end of that occupation is now forcing them to leave their homeland again.

The Afghan people played no role in negotiating the agreement under which foreign forces withdrew and the Taliban retook control. The former Afghan government, led by President Ashraf Ghani, whose stubbornness likely sped up the disaster, has been replaced by a regime with a troubling record when it comes to respecting human rights. Unlike 1979, the world is not welcoming Afghans fleeing their regime, and neighbors do not want them either.

The UNHCR, the U.N. Refugee Agency, estimates that at the end of 2020, there were around 2.8 million Afghan refugees worldwide, the vast majority of them in Iran and Pakistan. Germany took in 149,000 Afghans, a distant third after Pakistan and Iran. Appealing to Afghanistan’s neighbors to keep their borders open for those seeking safety, the UNHCR said on Aug. 27 that up to half a million Afghans could flee their country by the end of this year.

Based on cultural commonalities and the relative ease of crossing their difficult-to-enforce 900-km border, Iran has always been a preferred destination for Afghans escaping Afghanistan. However, due to an economic downturn and now the COVID-19 pandemic, many Afghan refugees with means have left Iran in recent years for Europe. This could change again due to the unfolding crisis in Afghanistan.

One of the main border crossings between Iran and Afghanistan is Islam Qala, which fell to the Taliban on July 8. After this incident, Afghan soldiers and border guards defected to Iran, but the authorities returned most of them to Afghanistan. The situation at the more southerly Zaranj crossing was more turbulent. When that city fell to the Taliban on Aug. 6, it sent tens of thousands of people fleeing either toward Kabul or the Iranian border. The Afghan Baluch population in Zaranj has strong ties to the Iranian Baluch population across the border.

The Iranian Students News Agency (ISNA) quoted a Zabul-based journalist as saying that the first day and night after the Taliban captured Nimroz, about 2,000 people crossed through Zaranj into Iran’s Sistan and Baluchestan Province. As the Taliban secured control of the border, that number dropped to 200. Many of those who entered Iran have been detained and returned.

It is now being reported that the Iranian government is building border camps for Afghan refugees. Hossein Ghassemi, the general director of the Iranian interior ministry’s border affairs office, told ISNA on Aug. 15 that Iran has constructed refugee facilities along its border provinces — Razavi Khorasan, South Khorasan, and Sistan-Baluchestan — to temporarily settle Afghans fleeing the Taliban. “We always monitor developments in neighboring countries based on their security impact,” he stated. On Aug. 18, however, Iranian officials denied the existence of the camps or plans to build them. Authorities may be concerned about the potential for insurgents to infiltrate Iran posing as refugees.

Seasonal workers from Afghanistan have been employed as an alternative to Iranians who refuse to work temporarily. For many Iranian employers, including pistachio producers, these workers are more cost-effective in areas where advanced technology and the right equipment are not available. Seasonal Afghan workers receive lower salaries than Iranian workers, do not have health insurance or a contract of employment, and can simply be fired at will.

The demand for seasonal workers has declined due to a combination of the pandemic, the crippled Iranian economy, inflation, and the devaluation of the rial. Many had left Iran because they were no longer receiving enough in wages to send money home. As a result, the number of undocumented immigrants who left Iran from February to May of this year, in just four months, was 94,000 fewer than a year earlier. However, they began to return as the Taliban advanced.

Using the refugees as leverage

About 780,000 registered Afghan refugees and 2.3 million undocumented live in Iran, 55% of them in Tehran, Isfahan, and Razavi Khorasan. There has been discrimination against Afghans in general and undocumented ones in particular.

The refuge identity card (Amayesh), which was introduced in a pilot program for documented refugees in May 2021, improved some basic rights such as access to health insurance and education. However, other restrictions remain, such as on domestic travel, unless they can obtain permission to do so. Undocumented Afghans have been subject to abuse and severe discrimination.

Afghan refugees have frequently been used as scapegoats. The issue has become so political in recent years that threats to deport the refugees have often been used as leverage over the former Afghan government or in dealing with the U.S. In 2019, Seyed Abbas Araghchi, Iran’s then deputy foreign minister, stated that “it is possible that we ask our Afghan brothers and sisters to leave Iran” if Iran’s oil exports come to zero, after the U.S. announcement that all waivers on imports of Iranian oil would end. Araghchi later called the threat a “misunderstanding.”

In 2016, a representative of Iran’s parliament blamed Afghan refugees for a water shortage: “We have close to 4 million Afghans in Iran. If each person uses daily 100 liters [of water], the Afghans living in Iran use 400 million liters.”

Iran’s use of Afghan refugees as leverage will certainly end with the Taliban’s rule. The Taliban are not terribly concerned over Afghans’ possible return to their home country, nor is the United States, or so it seems. Tehran has a genuine fear that Islamic State-Khorasan Province (ISKP) insurgents might infiltrate into Iran as refugees. This concern is so serious within the government and the Islamic Revolutionary Guard Corps that it may have been the driving factor behind Iran’s efforts to cozy up with the Taliban since 2016. They feel the eastern borders are vulnerable and consider only the Taliban able to fight ISKP.

Turkey, a key transit route for asylum seekers heading to Europe, has already built most of a planned 241-km, three-meter-high concrete wall on its border with Iran. This is to stop a potential influx of Afghans entering the country through Iran. Iranian travelers do not need a visa to enter Turkey so it is easy for refugees to cross the border under normal circumstances

In response to U.S. attempts to secure deals with countries to temporarily house Afghan refugees, Russian President Vladimir Putin has rejected the idea of relocating refugees from Afghanistan to neighboring Central Asian countries while their visas to the United States and Europe are being processed. “We don't want militants showing up here under cover of refugees," Putin was quoted as saying. That leaves the route through Iran into Turkey as the only option for refugees in northern Afghanistan.

The issue of Afghan refugees in the US

The scenes of turmoil that have accompanied the Kabul evacuation have badly affected the Biden administration. The U.S. president faced criticism from the man who made the initial withdrawal deal with the Taliban, and conservatives have called for Joe Biden’s resignation. Even members of the Democratic Party have been loud in their criticisms, fearing that the consequences of his handling of the refugee crisis might impact the 2022 midterm election.

Biden’s political problems were exacerbated by the Aug. 26 suicide bombing at Kabul airport, which killed scores of people, including 13 U.S. service members. The U.S. military conducted a retaliatory drone strike less than 48 hours later that allegedly killed the perpetrator of the explosion, a member of ISKP. It said it believed its strike killed no civilians. A second drone strike was carried out by U.S. forces in Afghanistan on Aug. 29, with the military initially saying it killed suicide bombers targeting Kabul airport, with civilian casualties reported. The Pentagon has since acknowledged, however, that the attack was a tragic mistake that killed 10 civilians, including seven children.

The Biden administration has authorized $500 million to help relocate Afghan refugees who helped U.S. forces, but this has drawn a right-wing backlash. “So first we invade and then we're invaded,” Fox News host Tucker Carlson said.

The bitter reality is that these Afghan refugees don’t have many friends around the world. European nations are reluctant to take them in. Afghanistan’s neighbors are similarly resistant. Afghans have been the victims of U.S. rivalries with regional players like Russia, China, and Iran. These rivalries have prevented the U.S. government from finding a lasting solution for Afghanistan.

Afghans have suffered greatly from the animosities between Iran and the United States. During the 2001 Bonn conference that created the first post-Taliban government in Afghanistan, Iran and the United States cooperated, and Iran contributed to Afghanistan’s stability. President George W. Bush's 2002 State of the Union address, which included Iran along with Saddam Hussein’s Iraq and North Korea in the “axis of evil,” changed the course of U.S.-Iran cooperation. That might have been the genesis of Iran’s reaching out to insurgents and providing them with improvised explosive devices (IEDs) to make it a painful stay for U.S. forces in Afghanistan.

The Biden administration now has two choices. It can commit to reaching a solution with Afghanistan’s neighbors, especially Iran, to overcome the Afghan crisis. This would oblige the U.S. to put aside its differences with Iran, Russia, China, and other regional governments, which may require compromises on other issues. Alternatively, it can take an even harder line in its dealings with those countries in order to soften domestic political attacks over the Afghan withdrawal. In that case, Afghans will be the sore losers.

Thanks to bad luck / I’m always surrounded by dangers.”