The Afghan Taliban and Covid-19: Leveraging the Crisis or a Change of Heart? 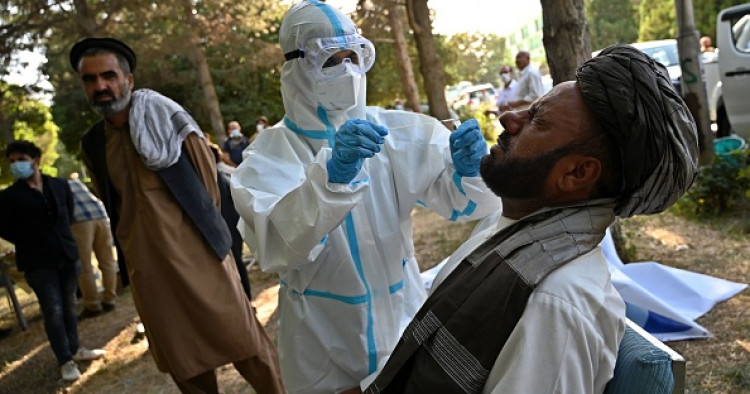 Pandemics strike hard in conflict zones by overwhelming the already weak public health systems, destabilizing the country further. At the same time, in the case of Covid-19, there were also hopes that the virus may prompt opposing groups to suspend hostilities and work together when UN Secretary-General António Guterres urged armed parties to stop fighting and called for an international ceasefire on March 23, 2020. While some rebel groups in the Philippines and Colombia suspended hostilities, they returned to violence shortly thereafter.[1]

The situation in parts of South Asia has also been dire. The World Health Organization (WHO) has said that the health situation in Kabul, Afghanistan continues to be one of the worst in the world.  Despite substantial improvements in the health sector and vast investments in the form of international aid, all of the various Afghan governments have struggled to provide basic healthcare services to the public.). The country continues to be riven with infectious diseases including tuberculosis, malaria, cholera, polio, measles, rabies and typhoid fever.[2] The Covid-19 pandemic has placed a greater strain on the country’s weak healthcare system. The return of Afghans from Iran,[3]  series of lethal attacks on healthcare workers and civilians and increasing insecurity has made the situation worse.[4]

As of April 8, 2021, Kabul had recorded 56,943 confirmed cases of Covid-19 and 2,516 deaths.[5] The actual numbers of cases and fatalities, however, are likely much higher due to lack of reliable data, inadequate public health system, limited testing capacity, and lack of a national death register. The exact extent of the community spread, and the scale of the pandemic has been difficult to determine.[6]

Kabul started its Covid-19 vaccination drive in late February 2021 by giving the dose to health workers, members of the security force and journalists.[7] The first supply of Covid-19 vaccine to Kabul was the AstraZeneca dose that came from India in February 2021[8], which was donated to Kabul as part of the Covax (Maitri) program, a global initiative to give out vaccines to low-income countries without a fee or at a lower price.[9] The government has also received the Sinopharm vaccine from Beijing to boost its Covid-19 immunization efforts.

The Taliban’s Novel Approach to Vaccines

The Taliban’s acceptance of the Covid-19 vaccine is a departure from its usual position against immunization programs. In the past, the Taliban issued fatwas against polio vaccination, targeted vaccine officials, and called it an American conspiracy aimed at sterilizing Muslims or a cover to target people.[10] These fears were not completely unfounded given that the CIA had resorted to a fake hepatitis vaccination programs to track down Osama Bin Laden in Pakistan in 2011 before he was assassinated[11] by US forces in 2011. Shakil Afridi, the Pakistani doctor that helped the CIA in the fake campaign was given a 33-year jail sentence in Pakistan.

Fears were stoked within the Taliban that polio vaccination officials were using the campaign as a ruse to collect intelligence and target insurgents. As a result, the group not only banned polio immunization campaigns but also resorted to extreme measures including assassinating, kidnapping, and beating vaccination officials and the security personnel who escort them. They held the view that these healthcare workers were not impartial entities acting on altruistic grounds to help those in need, but rather harboured ulterior motives or were even acting as agents of the West. Many anti-polio healthcare workers were forced to abandon the immunization campaign and the killing deterred other health officials from taking up the initiative due to fears of further attacks. A general distrust of vaccines in Kabul trickled down into the society through conspiracy theories and propaganda campaigns. Unfounded claims that the polio vaccine was contaminated by substances like pigs’ blood proliferated across communities.[12] As a result, there were difficulties in executing these programs,[13] especially in rural areas. In some cases, parents even forced their children to vomit after they received the mandatory polio vaccine in government-administered health centres.

The Taliban’s efforts to disrupt the overall functioning of the country’s state institutions and the well-being of Afghan society has manifested in the form of suicide attacks, kidnappings, assassinations, guerrilla warfare and rocket attacks. The group has planted explosives in public areas to achieve high casualty rates. The insurgent group has been notorious for using civilians as a shield to bring foreign soldiers into an area and eventually detonating a bomb or attacking them. Most of the Taliban’s attacks have killed more civilians than soldiers.[14]

The Taliban had implemented a national ban on female education and women’s access to employment in 1997 when it was in power.[15] Those who defied their orders were dealt with severely. With the Taliban controlling more areas in the country, it has continued to restrict access to female education or even banned it completely. The group rejected any kind of modern education and often associated it with Western imperialism. It considered education for girls a sin and believed that boys should be educated in madrassahs.[16] In contested areas there are increased security risks for girls who are sent to school including threats of acid attacks, kidnapping, and sexual harassment.[17] International efforts to provide an education to girls in Afghanistan has declined in recent years due to government inaction, increasing violence and insecurity, and donor disengagement. While it is difficult to draw a causal link between lack of education and conflict, the former can contribute to the latter in indirect ways.

Despite the Taliban’s history of disrupting public health and education efforts, the group has taken the threat of the Covid-19 pandemic seriously. It has emphasized the provision of public health services as a part of a wider effort to reduce the spread of the virus and number of fatalities. In April 2020, the Taliban took concerted efforts to reduce the spread of Covid-19 in areas under its control, including declaring a ceasefire, giving permission to health workers to enter their areas, executing awareness workshops on public health, giving out medical equipment to the public and setting up quarantine centers.[18] It also implemented a new rule that Afghans returning from Iran, where the pandemic was proliferating, would need to serve a two-week mandatory quarantine in their homes, in contrast to the inadequate screening of thousands of people entering the country each day by the Afghan government.[19] The Taliban also committed to working with healthcare workers and providing them the necessary assistance. The group’s unexpected approach to tackling Covid-19 gave a ray of hope that it might pause its hostilities and cooperate to contain the pandemic.

Pragmatism Rather Than a Change of Heart

The current vaccination drive in Afghanistan is taking place in a volatile environment amidst increased fighting between Afghan security forces and the Taliban. The Taliban’s unexpected response to Covid-19 vaccines may been partially driven by the fact that many top members of the Taliban including Haibatullah Akhundzada and Sirajuddin Haqqani have contracted the virus.[20] The virus sweeping through the upper echelons of the group not only left a leadership vacuum, but it affected their approach to the intra-Afghan dialogue, military operations and money-making ventures.[21]

The sophisticated system of parallel governance created by the Taliban in areas under its control may enable it to provide quicker and fairer services in relative to the Afghan government. There is anxiety about whether the vaccine would be equitably distributed to the public, given that many government officials have been convicted for misappropriating Covid-19 response funds.[22] Alternatively, the Taliban could work closely with the Afghan government to ensure that the vaccines are quickly and safely distributed in areas under its control. Many Afghans still perceive Covid-19 as a hoax or exaggerated instead of as a serious public health threat. The Taliban can play a bigger role in capacity and promotion of the Covid-19 vaccine by addressing these skewed narratives, many of which it probably had fuelled in the past, to boost public confidence in the Covid-19 vaccination drive in the country. However, a Taliban-led initiative may face a pushback among some segments of  Afghan society, especially in rural areas where residents have had awful past experiences with the group.

It is unlikely that the Taliban has had a true change of heart through its unprecedented approach to the provision of public health services. It could be a part of a larger strategy to gain acceptance as a legitimate and responsible actor. However, the stalled peace talks between the Afghan government and the Taliban could act as a hindrance to that objective. The Taliban’s increased attacks on Afghan forces above seasonal norms could disrupt the delayed peace discussions and also increase disillusionment among the public. The unusually high number of attacks last winter, when fighting typically slows down, may signal that the group’s upcoming spring offensive could be more intense than ever.[23] The Taliban, which commands authority in more areas than at any time since its ousting by US-led forces in 2001, may be seeking to increase its territorial control and gain an upperhand in the peace talks.[24] According to Long War Journal, 189 districts are currently contested, 133 are under the control of the government and 75 under the Taliban’s control.[25] Moreover, the Taliban has not made a clean break from its past. It continues to have links to Al-Qaeda, Haqqani network and other violent terrorist groups present in Afghanistan. These needless attacks and affiliations with extremist organizations may not only deter US President Joe Biden from withdrawing all American troops by the agreed May 1, 2021 deadline, but also compel the United States to carry out greater air strikes to protect the local forces.[26]

It is not uncommon for terrorist and militant groups across the world to perceive vaccination campaigns with a deep mistrust and take strong action to disrupt them. The ideological clash between central governments and terrorist groups also prompted the latter to take a strong stand again immunization efforts. The strong opposition by religious fundamentalists in countries such as Afghanistan, Nigeria, and Pakistan have resulted in the failure of vaccination efforts against polio in the past.[27] As a result, polio has been eradicated in most countries except for Pakistan and Afghanistan.[28] However, in the case of Covid-19, the Taliban has responded in an unprecedented manner by facilitating public health workshops and giving permission to healthcare workers to administer the vaccine in areas under its control. That said, this is likely to be part of a larger strategy to gain legitimacy rather than a change of heart.

I would like to thank Jasnea Sarma and Chayanika Saxena for reviewing earlier drafts of this article.

[2] “10 of the most common diseases in Afghanistan,” The Borgen Project, https://borgenproject.org/common-diseases-in-afghanistan/.

[4] “Security will remain crucial with or without peace: SIGAR,” Khaama Press, March 11, 2021, https://www.khaama.com/security-remains-crucial-with-or-without-peace-sigar-4324248/

[14] “Targets and Tactics,” Center for International Security and Cooperation,  https://cisac.fsi.stanford.edu/mappingmilitants/profiles/afghan-taliban#highlight_text_8601.

[17] “Afghanistan: Girls Struggle for an Education.”

[18] Roshni Kapur and Chayanika Saxena, “The Taliban makes the most of Covid-19 crisis in Afghanistan,” The Interpreter, April 27, 2020, https://www.lowyinstitute.org/the-interpreter/taliban-makes-most-covid-19-crisis-afghanistan.

[22] Zucchino and Rahim, “Where a Vaccination Campaign Faces Skepticism, War and Corruption.”

[24] Frud Bezhan, “The Taliban, The Government, And Islamic State: Who Controls What in Afghanistan?” Radio Free Europe-Radio Liberty (RFERL), May 31, 2020, https://www.rferl.org/a/taliban-government-islamic-state-who-controls-what-in-afghanistan-/30644646.html.

[25] “Leader of Afghan Taliban Said to Be Gravely Ill With the Coronavirus,” Foreign Policy, June 1, 2020, https://foreignpolicy.com/2020/06/01/afghan-taliban-coronavirus-pandemic-akhunzada/.