After 18 years, Palestinian families can finally live together: The end of Israel’s 2003 citizenship law 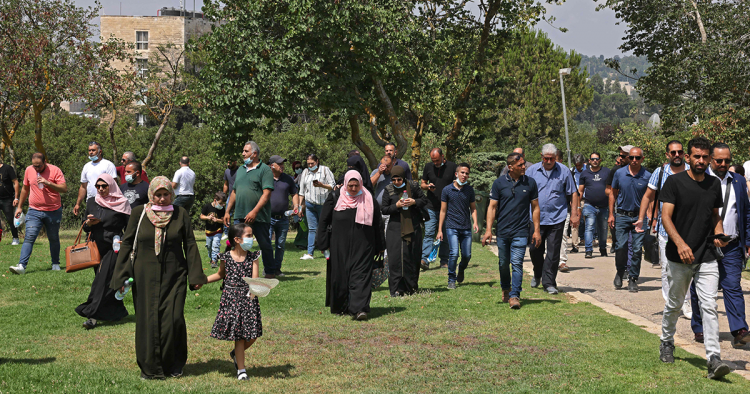 The expiration of Israel’s 2003 citizenship law early last month has finally ended the suffering of roughly 30,000 Palestinian families and paved the way for their reunification. Despite the efforts of the Zionist political parties to renew the law, the abstention from voting of the two Arab Palestinian Knesset members from the United Arab List — which, for the first time, is represented in Israel’s new coalition government — blocked the majority needed to extend the long-standing “temporary” law, which subsequently expired on July 6. While this is welcome news for many Palestinian families, the defeat of this notorious law is by no means a panacea. Until there is real change in Israel, Palestinians, both those who are citizens of Israel as well as those in the occupied territories, will continue to face legal obstacles when it comes to obtaining their basic rights.

Still, the expiration of the 2003 law is a major development and will affect everything from family matters to employment opportunities for Palestinians. Palestinians from the occupied territories who marry Palestinian citizens of Israel will be able to live with their spouses in Israel. Families that have been separated from each other will be able to reunite, or at least start the process of family reunification. Those who have been living in Israel with their loved ones under a temporary legal status will now have the right to remain, a right they have been denied for nearly two decades. In the month since the law expired, Israel’s Immigration and Population Authority has received 785 requests for family reunification, a sharp increase from the average of 1,000 per year it received previously.

Originally enacted as a temporary measure in 2003, the Knesset regularly voted to extend it for the next 18 years. It deprived Palestinians from the occupied West Bank and Gaza Strip married to Palestinian citizens of Israel of the right to reside in Israel with their spouses, work in the country, or even drive a car.

The law was enacted during the Second Intifada, supposedly as an urgent security measure to prevent Palestinians from gaining access to Israel and carrying out terrorist attacks. It is worth noting that the Israeli state, at that time, strongly denied any “demographic” intent, which is the usual euphemism for policies that seek to reduce the number of Palestinians living in Israel. However, in the years following the law’s enactment, as Israel started granting large numbers of Palestinians work permits to enter the country, it became clear that the security justification was merely a smokescreen.

Indeed, the 2003 citizenship law is indicative of Israel’s broader discrimination against its Arab citizens and the policies and practices imposed on them, often in violation of international human rights laws and norms. Though the law faced many legal challenges over the years, it took a major change in Israeli politics and the rise of a new coalition government that included, for the first time, the United Arab List to bring about its end.

Many Palestinians rejoiced at the law’s repeal last month. It proves what they’ve known all along: that claims that the law was needed for Israel’s security were deceptive. This was underlined by the Likud party’s vote against renewing the measure. If the party truly believed the security threat was real, they would have supported the extension despite their political dispute with the new government; instead, they voted against the renewal in the hopes of bringing it down. The smokescreen has now cleared, revealing that it was simply yet another discriminatory law against the Palestinian citizens of Israel.

One might assume that Interior Minister Ayelet Shaked, who has declared that she will do her best to see the law reinstated, would have broad support, including from Israel’s Supreme Court, which has previously upheld the law against legal challenges and declared it constitutional. Still, for the time being, reinstating the law won’t be easy. The Likud is not willing to cooperate with the current government, and at the same time, some members of United Arab List will refuse to vote for it should the measure come up again.

So after 18 years and seismic political change at the highest levels in Israel, the sun may have finally set on this long and troubling episode, but that doesn’t change the many legal difficulties that remain for Palestinians from the occupied territories seeking to enter and live in Israel. Palestinians applying for legal status have long suffered under Israeli bureaucracy, standing in long lines at the Ministry of Interior only to have their applications for citizenship, visas, entry permits, and other matters of personal status rejected for arbitrary reasons. In many cases, Palestinians end up spending significant sums on legal fees in an often futile attempt to appeal such decisions at the ministry and in the courts.

Of course, the issue of family reunification — on both a legal level as well as an administrative one, in terms of the applications process at the Interior Ministry — is part of the broader political reality facing Palestinians split between Israel and the occupied territories. As long as there is no solution to the Israel-Palestinian conflict, Palestinian families will continue to suffer from discriminatory rules and legal frameworks that seek to deny their basic right to live together.

Dr. Morad Elsana is an expert in human rights law and Arab world studies. He teaches at the American University and is the founder of Alhuquq Center for Human Rights. The views expressed in this piece are his own.