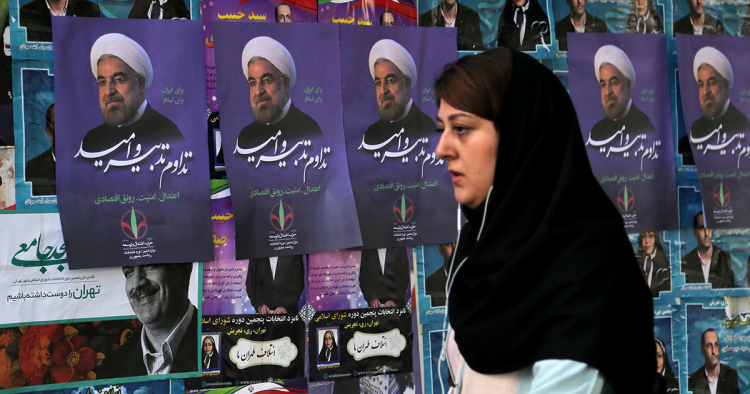 In 2013, millions of Iranians voted for Hassan Rouhani as president, after eight years under Mahmoud Ahmadinejad. During the campaign, supporters of Rouhani advocated for what they called a new “Hope Government.” His platform offered a series of promises: His administration would improve the economic situation and Iran’s relationship with the world, remove sanctions, eliminate limitations and restrictions on cultural activities, respect the rights of citizens, and engage women in public life and decision making. Furthermore, he promised to establish a Ministry of Women’s Affairs in his new cabinet.

Today, as we approach the end of Rouhani’s government, how should historians and scholars evaluate the economic, political, and social situation over the last eight years? The issues of women’s political participation and social freedom, which were promised by Rouhani, especially during his first campaign, are of particular importance in this regard.

All of the members of Rouhani’s cabinet during the eight years of his presidency were men. In his first term he only appointed three women as deputies: Masoumeh Ebtekar at the Department of Environment, Elham Aminzadeh as the president's legal deputy, and Shahindokht Molaverdi as the deputy for women and family affairs. Soon after her appointment, Aminzadeh was replaced by a man, Majid Ansari. Molavardi, in turn, resigned in 2017. During Rouhani’s second term, there were two female deputies in the cabinet, for women and family affairs and the legal deputy.

President Rouhani had promised to establish a Ministry of Women’s Affairs, but instead appointed Molaverdi as his deputy for family and women’s issues. In 2017, when Ms. Molaverdi expressed her ideas regarding women’s issues, she was not only removed from her job, but also sentenced to two and half years in prisonin December 2020. She was charged with "providing classified information and documents … with the aim of disrupting the security of the country" and "propaganda against the state," as well as "encouraging corruption and prostitution and encouraging individuals to commit sexual perversions."

What actions and statements on the part of Ms. Molaverdi resulted in her prison sentence? One of the cases that led to the charges against her was "concluding a contract with the United Nations Population Fund." Supreme Leader Ayatollah Ali Khamenei, a proponent of population growth, opposes the U.N. Population Fund, which among other activities provides access to birth control. Ms. Molaverdi was also pursued for her support for the UNESCO Document 2030 UNESCO and Sustainable Development Goals, which she defended as a way to educate girls and boys equally. But Ayatollah Khamenei, for his part, was a serious critic of the document.

Another “criminal action” by Ms. Molaverdi was her praise for the Girls of Enghelab Street and her consideration of their protest movement as a "civil protest." This statement made her the focus of considerable conservative criticism.

Ms. Molaverdi’s efforts at reform did not come to fruition and instead she paid a heavy price — she was sentenced to prison — while President Rouhani remained silent.

Closing women’s magazines and blogs and arresting journalists and activists

In Iran, activities in support of women’s rights, such as writing articles or starting campaigns, associations, or women’s clubs that criticize the laws, is considered a major crime and a threat to national security. During Rouhani’s campaign in 2013, women were promised more freedom to express their concerns and needs — they were promised that the situation would change.

After eight years of Rouhani’s presidency, however, women's rights activists do not have the right to their own publications or to cover women's issues. Several publications have been banned and there are many examples of female journalists and human rights activists who have been arrested: Nasrin Sotoudeh, a human rights lawyer imprisoned in 2018, was given a 38-year sentence for defending women’s rights activists. Narges Mohammadi, a civil rights activist, was imprisoned from 2016-20. Bahareh Hedayat served 6.5 years in prison (from 2010-16) for co-founding the peaceful “One Million Signatures” campaign to end gender-based discrimination and is now sentenced to four more years for peaceful protests. Solmaz Ekdar, a journalist, social activist, and defender of children's and women's rights, was arrested in June 2015; she has a history of working with the newspapers Shargh and Bahar. Minoo Mortazi Langroudi, a women's rights activist from the Mothers of Peace Forum and a member of the National Religious Activists Council, has been sentenced to six years in prison and two years of deprivation for political and civil activities. The number of women journalists and human rights activists who have been arrested and sentenced to prison in Iran remains far too high, and while it may not have increased during Rouhani’s government, it certainly has not decreased either.

The magazine Zane Ruz ("Today's Women") was banned just for running a story about cohabitation, a practice commonly referred to as “white marriage.” In cyberspace, women's rights activists and audiences also witnessed frequent filtering of websites. For example, the sites for the "Feminist School" of Zanestan, Change for Equality, the Equal Family Law, and Bridges for Women were among a number that were filtered and closed by court authority. The result of banning and filtering these sites was to limit women's rights activists from even peacefully expressing their ideas and having debates online.

In the fall of 2014 in Isfahan, a series of attacks were carried out against women by unknown motorcyclists, who sprayed their heads and faces with acid. The attackers were encouraged by some Friday Imams who argued that as Muslims they were responsible and should take action to prevent “un-Islamic” behavior by women wearing “bad hejab” in public. Women’s rights activists in Iran reported that at least 460 women have been attacked with acid, and some of the victims’ faces were completely damaged.

A campaign began in Iran against the acid attacks. One of the campaign’s speakers told me in a phone call, “None of attackers has been arrested since we think it was organized and supported by the state. At least we can say no effective investigation have been taken to identify the criminals.” Photos and video footage of the victims have been posted on social media, in which they explain how they suddenly got acid sprayed in their faces. Among the victims were girls as young as two years old.

What was unnatural and surprising was the reaction of government officials: Instead of investigating or arresting the criminals — those carrying out the acid attacks — the women activists who started the campaign against the attacks were themselves arrested. Indeed, Rouhani’s government and other “reformist” decision makers did not even mention the acid attacks, as if nothing had happened. But the Revolutionary Guards arrested the women’s rights activists who started the campaign against the acid attacks and they were sentenced to prison. For example, the student and women's rights activists Fereshteh Toosi, Parastoo Beiranvand, Zahra Khandan, Mahdieh Golrou, and Soha Morteza'i were arrested in the winter of 2014, after protesting against the serial acid attacks.

Iranians have repeatedly been given hope that reform could lead to a better future, one with economic progress, less inflation, and a peaceful relationship with the U.S. and the rest of the world. But time and again these hopes have been dashed. The reform movement that began in 1997 with the election of Mohammad Khatami is now ending with Rouhani’s presidency. Today we have enough evidence to say confidently that even if a real reformist government were elected, it would not have the power to carry out real reforms. The record of the Rouhani government over the past eight years is the reason a majority of Iranian women and men, including those from a wide range of social, cultural, and religious backgrounds, have decided not to vote in this year’s presidential election, set to be held on June 18. Going forward, we can expect to see more violations of women’s and civil rights, more poverty, more people arrested and sent to prison, as well as more civil disobedience and more popular protests. The trajectory is clear. The only question is how long it will continue and how it will end.