Is Ahmadinejad set for a comeback? 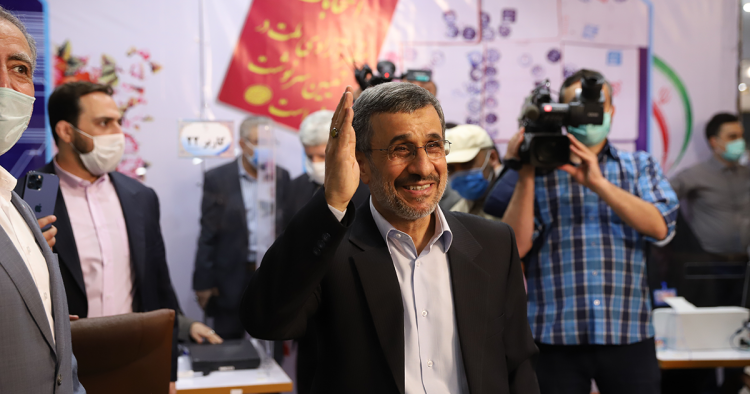 As the Islamic Republic of Iran approaches its 13th presidential election, a number of conservative candidates have registered, including Islamic Revolutionary Guard Corps (IRGC) Generals Saeed Mohammad and Mohsen Rezaei, former Speaker of Parliament Ali Larijani, and Judiciary Chief Ebrahim Raisi. From the reformist camp, Mostafa Tajzadeh, a former adviser to President Mohammad Khatami, and Vice President Eshaq Jahangiri have announced their candidacy for the upcoming June elections. Meanwhile, the candidacy of former President Mahmoud Ahmadinejad (2005-13), once strongly supported by the conservative camp, poses a significant challenge to other conservative candidates by dividing their base. Furthermore, given Ahmadinejad’s transformation into an opposition voice — one who openly crosses the Islamic Republic’s redlines — the ruling establishment is now facing a predicament on whether to allow the controversial statesman to run, or to bar him from participating in the presidential elections.

The son of a blacksmith from the village of Aradan near the city of Garmsar, Ahmadinejad grew up in a lower-middle-class family, a source of pride for the future university professor. Ahmadinejad was accepted into a civil engineering program prior to the Islamic Revolution of 1979. Like many young followers of Ayatollah Ruhollah Khomeini, when the Iran-Iraq war (1980-88) broke out, he volunteered to fight and served in the IRGC’s engineering corps. Nevertheless, Mojtaba Samare-Hashemi, a senior advisor to Ahmadinejad, has denied reports that he was ever a member of the IRGC, claiming that, “Considering that his course of study was civil engineering, he helped engineering [in war fronts], but not as an official member. … He has never been a member of [IRGC].” At the conclusion of the war, Ahmadinejad went back to school and completed his studies, earning a PhD in civil engineering in 1997.

In his first presidential campaign in 2005, Ahmadinejad, who was then serving as the obscure mayor of Tehran, ran against the late Ayatollah Hashemi Rafsanjani, a two-time president and one of the country’s most powerful political figures. Surprisingly, Ahmadinejad, who had campaigned as a “man of the people,” defeated Hashemi in the run-off, becoming the sixth president of the Islamic Republic.

Ahmadinejad went on to become a political phenomenon in the Islamic Republic. Despite lacking any religious credentials, he frequently tapped into the religious beliefs of his supporters. For example, upon returning from his first trip to New York to attend the U.N. General Assembly, he claimed in November 2005 that during his speech at the U.N., “There was a light around him and that the attention of the world leaders in the audience was unblinkingly focused upon him.” Quite paradoxically, Ahmadinejad’s administration also frequently invoked Persian nationalism, offering a new narrative not previously seen in the Islamic Republic. In 2010, Ahmadinejad praised the Achaemenid king Cyrus the Great, the founder of the Persian Empire, claiming that the “essence of the Cyrus was that of the prophets.” Ahmadinejad’s Maktab-e Iran ("School of Iran"), first introduced by his Chief of Staff Esfandiar Rahim-Mashaei, also called for an “Iranian” understanding of Islam. Meanwhile, his brand of populism brought Ahmadinejad fame and popularity, especially among the more underprivilege classes of society who had not benefited from the “reform” agenda of former President Khatami.

Aside from his populism and Iranian nationalism, what distinguishes Ahmadinejad from other Islamic Republic statesmen is his confrontational approach to both domestic and international politics. During his tenure as president, Ahmadinejad frequently clashed with other major players of the Iranian polity, including Larijani and the IRGC, whom he publicly called “our smuggler brothers.” Meanwhile, Ahmadinejad, in a never before seen open clash with Iran’s Supreme Leader Ayatollah Ali Khamanei, refused to go to work for 11 days, after Khamenei overruled the president’s decision to fire his intelligence minister. The incident badly dented Ahmadinejad’s popularity among the hardliners, and a group of his associates was arrested and imprisoned in its aftermath. Kazem Sadiqi, the Imam of Tehran’s Friday Prayers, speaking on the authority of Khamenei, also claimed in the aftermath of incident that if the supreme leader “divorces Ahmadinejad’s wife, she will become Haram (“sin”) for him and he can’t touch her.”

Ahmadinejad faced significant opposition internationally too. Largely due to his confrontational approach, the United States successfully assembled a coalition of world powers aimed at curtailing Iran’s nuclear program. This resulted in several rounds of U.N.-imposed sanctions, which the undeterred Ahmadinejad called “worthless papers.” It is noteworthy that while Ahmadinejad attempted to improve relations with the U.S., and even congratulated former U.S President Barack Obama on his election, Iran’s relationship with the outside world remained contentious, especially over its nuclear program and Ahmadinejad’s controversial remarks on Israel and Holocaust.

From president to critic

Since leaving office in 2013, Ahmadinejad has become an outspoken critic of the ruling establishment, often crossing the redlines of the Islamic Republic. In 2017, Ahmadinejad announced that, “If an official is no longer wanted by the people, he is an oppressor, regardless of his position.” Ahmadinejad also noted in the same year, in his usual street jargon, “Does the leader [Khamenei] tell you to stop thinking? If you disagree with his opinion, should you go lie down and die? You must express your opinion.” Meanwhile, when he registered for the 2017 presidential elections, Ayatollah Khamenei publicly advised him not to run, and the Guardian Council, vested with the authority to approve candidates, disqualified the former president.

Neither his 2017 disqualification, nor the attacks on his close associates have deterred Ahmadinejad, however. After announcing his candidacy to run in the June 2021 elections, Ahmadinejad threatened in May 2021 that if he is disqualified by the Guardian Council he will boycott the elections. During his fiery speech, Ahmadinejad further claimed that, “Lies, systematic corruption, and religious aristocracy … have faded the hopes of people to fix the problems within the existing frameworks.” There was a strong backlash from hardliner groups to his speech. Ahmad Khatami, a hardliner cleric and a member of the Guardian Council, responded, without mentioning Ahmadinejad, that, “Those who do not obey the laws [of elections] do not believe in the Nizam (“system”) and the constitution and therefore, are not suitable for candidacy.” Ahmad Alamolhoda, the conservative Imam of Mashhad’s Friday Prayers and a member of the Assembly of Experts, proclaimed that, “If someone says that they will not participate in the elections, they are wasted goods; Western media [too] want to discourage people and say don’t participate in the elections.”

Looking ahead to June

Given his previous tensions with Khamenei and disqualification in 2017, Ahmadinejad, who once enjoyed the full support of the supreme leader, is cognizant of his potential disqualification. Nevertheless, he seems to have decided to challenge the establishment by announcing his candidacy anyway. Ahmadinejad could also be preparing himself for the post-Khamenei era. In this context, the former president’s candidacy will, at a minimum, prevent his total marginalization, and once the 82-year-old supreme leader leaves the scene, which may not be all that far off, Ahmadinejad could use his strong base of support to return to Iranian politics.

In the unlikely scenario that the Guardian Council approves Ahmadinejad, his populism and fiery oratory, coupled with a strong base of support, will pose a serious challenge to other conservative candidates such as Judiciary Chief Raisi, who it is widely speculated is being groomed to succeed Ayatollah Khamenei, or the lesser known IRGC Gen. Mohammad. Indeed, in a December 2020 survey, 37% of respondents said that they would support Ahmadinejad in the elections. According to the same poll, Ahmadinejad’s favorability among the respondents stood at 64%, with Raisi standing at 51%. In short, if Ahmadinejad is allowed to run, his chances of success should not be underestimated. It may be for the very same reason that the establishment decides not to take any risks and nips the threat of his potential victory in the bud.

Ahmadinejad has proven himself to be a loose cannon, unashamedly crossing the traditional redlines of the Islamic Republic. Once favored by the supreme leader, he has transformed himself into an insider opposition voice, with a strong base of support, especially among the working class. In any case, Ahmadinejad’s candidacy is a lose-lose proposition for the establishment, in the sense that if he is allowed to run, he could pose a serious challenge to the other conservative candidates, especially Raisi. Meanwhile, he has threatened to boycott the elections if he is disqualified, essentially undermining their legitimacy and by extension, that of the regime.

Sina Azodi is a nonresident fellow at the Atlantic Council and a visiting scholar at the George Washington University’s Institute for Middle East Studies. He is also a PhD Candidate in International Relations at the University of South Florida. Follow him on Twitter @Azodiac83. The views expressed in this piece are his own.