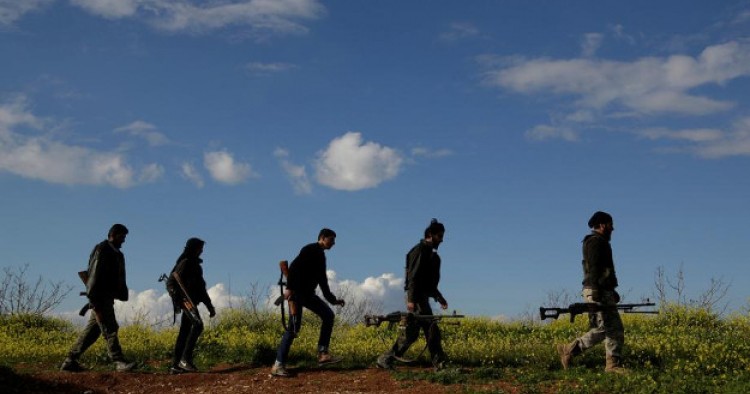 Idlib is currently the site of increasing competition between the two most dominant armed coalitions, the al-Qaeda-linked Hay’at Tahrir al-Sham (H.T.S.) and Ahrar al-Sham. The province has witnessed limited airstrikes since a de-escalation agreement, which came into effect on May 5, was brokered by Russia, Turkey, and Iran at the Astana talks. Idlib was one of four areas labeled as a de-escalation zone.

The agreement has, however, prompted a contest between H.T.S. and Ahrar al-Sham, with both groups vying to increase their influence and control new areas. The competition between them has three dimensions: military, economic, and social.

For strategic, economic, and military reasons, H.T.S. has focused efforts on controlling vital towns, specifically along the Syrian-Turkish border on the western side of the province. H.T.S. fighters that shifted to the region from losses in Aleppo and Homs were deployed carefully in areas where the al-Qaeda affiliate wanted to increase influence, particularly along the northwestern border.

The “smuggling” route along the border from Harem to Darkoush is totally controlled by H.T.S., which uses it to transport oil and other goods. The mountainous nature of the area and its many caves also allow H.T.S. to thwart any attack or attempts by Ahrar or any other group to assert control in those territories. 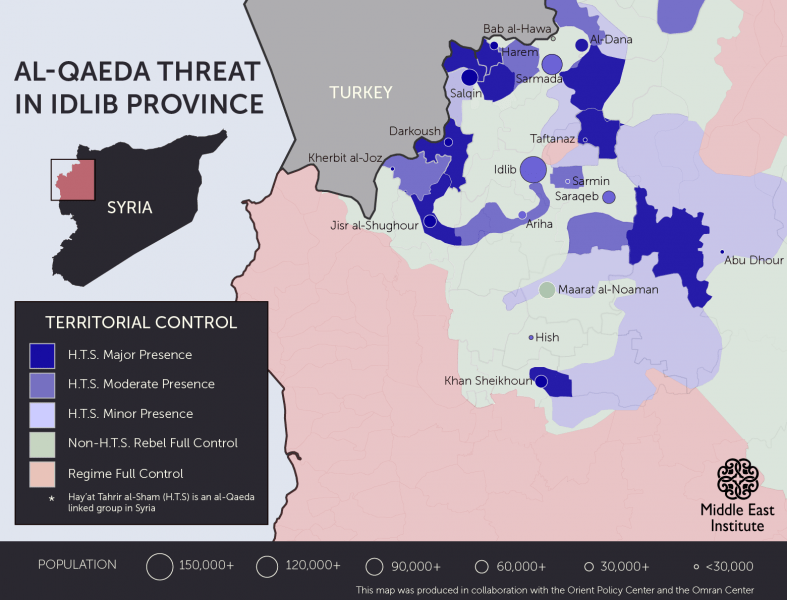 Though H.T.S. controls military bases in the area, such as Taftanaz, to the northeast of Idlib, and Abu Dhour, southeast of Idlib, the group faces challenges in governance. Lacking communal support and strong governing skills, H.T.S. can’t fully control major cities like Idlib, Maarat al-Noaman, and Saraqib. Even in smaller towns like Kafranbel, where civil society has been active, H.T.S. has also failed to maintain a tight grip.

The experience of Maarat al-Noaman is an example of how local communities have played a major role in confronting H.T.S. Since February 2016, civil society has actively mobilized against al-Qaeda’s presence, first against Jabhat al-Nusra, as they were called at the time, and later against present-day H.T.S. The group was unable to control the city or defeat armed opposition groups largely due to the local community’s support for the armed groups. “It is not the armed groups there that protected civil society and the local community, it’s the community that prevented H.T.S. from defeating the armed opposition inside the city,” said Basel al-Junaidy, director of Orient Policy Center.

The only large city H.T.S. has been able to control is Jisr al-Shughour, in part because the armed groups surrounding the city are loyal to Abu Jaber, the former leader of Ahrar al-Sham who defected to H.T.S. earlier this year.

Following increasing pressure from Turkey to protect its borders, H.T.S. delegated to Ahrar al-Sham control over parts of the northwestern border near the town of Salqin. However, H.T.S. still enjoys influence there, and Ahrar still needs H.T.S. approval to appoint the leader of the group assigned to watch the border in that area.

Yet the current map could also be misleading. There are areas where H.T.S. has presence, but struggles to maintain control, and there are areas where it does not yet have a presence, but could expand power if threatened. For example, the main border crossing between Idlib and Turkey is Bab al-Hawa. It is controlled by Ahrar al-Sham, but H.T.S. controls the route leading to the crossing through several checkpoints, and has the capability to attack the border crossing and seize control at will.

In the north, Sarmada is becoming the economic capital of Idlib. H.T.S. controls most of the decision-making there with regards to regulations like money transfers, the exchange rate, and the prices of commodities like metal and oil. On the other hand, H.T.S. is weakest in southern Idlib, from the borders of the Hama province to Ariha, the social base for Ahrar al-Sham.

H.T.S. governs through its General Directorate of Services, which competes with several other entities to provide services. These competitors include Ahrar al-Sham’s Commission of Services, local councils under the umbrella of the opposition interim government, independent local councils, and civil society organizations. A recent study conducted by the Omran Center shows that there are 156 local councils in the province of Idlib; 81 of them are in areas where H.T.S. has a strong presence. As highlighted above, however, H.T.S. doesn’t enjoy equal control over all of these councils. While in some instances the group has comprised whole councils—as in Harem, Darkoush, and Salqin—in other councils, H.T.S. is only able to influence some members.

Due to the de-escalation zones agreement, H.T.S. currently finds itself in a challenging position. When the Nusra Front established its presence in Syria, it promoted itself as the protector of the people. Escalating violence helped the group gain legitimacy and sympathy, and many armed groups found a strong ally in the al-Qaeda affiliate as battles raged against the regime. As front lines become quieter, H.T.S. is beginning to lose its appeal.

The H.T.S. alliance also faces internal threats. The dynamics are changing between Nusra and the Nour al-Din al-Zenki movement, the second largest component of H.T.S. On June 2, Hussam al-Atrash, a senior leader of Zenki, tweeted that areas out regime control should be handed over to the opposition interim government, and all armed groups should dissolve. Atrash justified his suggestion as the only way for the Sunni armed opposition forces to survive. The comments irritated H.T.S. leadership, which referred Atrash to the H.T.S. judiciary. The tweets disappeared shortly thereafter.

Following that incident, H.T.S. banned all fighters from mentioning any subgroup names, like Zenki, to enforce unity. However, it is unlikely that H.T.S. will be able to maintain long-term enforcement. No opposition military alliance has been able to survive throughout the Syrian conflict, and subgroups continue to migrate from one umbrella to another for tactical reasons, seeking military protection and/or new funding opportunities.

While H.T.S. faces these internal and external challenges, it is also evolving. Its leadership clearly realized the importance of building stronger connections with local communities in order to compete with Ahrar al-Sham. H.T.S. adopted new tactics in governing. Instead of appointing foreigners or military leaders, H.T.S. has appointed local civilians as its representatives in most of the towns under its control in Idlib.

H.T.S. and Ahrar will continue to compete in governance and service provision, which is key to building loyalty, increasing influence, and widening public support. The groups are also cautiously following regional and international developments as they prepare for different scenarios. If the de-escalation agreement collapses or an external force intervenes in Idlib, all dynamics will certainly change. Ahrar and H.T.S. might confront each other, become allies, or re-shuffle their respective coalitions. The situation in Idlib is far from stable.