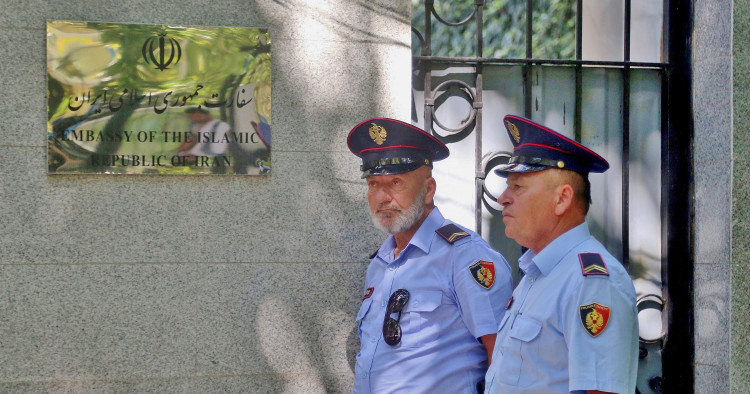 Albania’s Prime Minister Edi Rama visited Israel this week to, among other objectives, engage his hosts in policy discussions about Iran. Albania, a small Muslim-majority country in Southeastern Europe, has unexpectedly emerged as a stalwart foe of the Islamic Republic. Relations have been rocky over the past decade, and Rama’s visit to Israel is bound to further irk Tehran; the Iranian regime will now likely look for new ways to hit back at Albania. In Tirana, like the rest of the Balkans, Iran has a historic footprint. But while its clout there has decreased over recent years, this part of Europe might still be vulnerable to Iranian retaliation — at least that’s what Tehran implicitly warns.

Since shaking off the Communist system, Albania has opted for closer integration with the West, including joining the North Atlantic Treaty Organization (NATO) in 2009 and becoming an accession candidate to the European Union in 2014. At the same time, Tirana not only began to distance itself from the Islamist regime in Tehran but took specific actions that the Iranians have considered outright hostile.

In 2013, Tirana accepted an American request to host members of the Mujahedeen-e Khalq (MEK), a militant Iranian opposition group that had been evacuated from its base in Iraq following the rise to power of pro-Iran political groups in Baghdad. The MEK had lived under Saddam Hussein’s patronage since the 1980s, but his toppling in 2003 created a need to find a new sanctuary for the group, and the U.S. urged Albania to host the MEK members.

Tehran considers the MEK a historic and detested rival — the leftist-Islamist MEK and the clerical-led Islamists in Tehran had been part of the same anti-shah movement before 1979 yet fell out once the Islamic Republic was born. But even more importantly, the ruling ayatollahs now see the group as a pawn in alleged ongoing Western efforts to undermine the theocratic Iranian regime.

Most recently, this struggle has played out in the realm of cyberspace. In September 2022, Tirana cut diplomatic relations with Tehran in retaliation for a reported cyberattack against sites in Albania that had been carried out in July. That attack in July was followed by another in September, which Tirana also blamed on Iran. The cyberattacks did not only target the MEK but also Albanian governmental websites such as that of the state police, according to Tirana.

For its part, Washington backed Tirana’s decision to cut ties with Tehran and, specifically, sanctioned Iran’s Ministry of Intelligence and its head for the agency’s alleged role. The U.S. support was full and well coordinated, and Albania had by now firmly become an active player in Washington’s policy of pressuring Tehran.

Tehran has rejected the charge that it was behind the July and September cyberattacks. Instead, it has accused Albania of complicity in an American-Israeli cyber campaign against Iran, in which MEK members act as cyber warriors of the West.

Such Iranian denials paired with counter-accusations are presumably intended to deter the Albanian authorities from giving the MEK space to operate against Iran. In other words, Tehran warns that Albania will remain a legitimate target as long as the MEK is allowed to launch cyberattacks on Iran from that Balkan country.

Various state-run media outlets in Iran have echoed the regime’s defensive rhetoric. But other warnings have been more dire. One newspaper stated that “Iran has at its disposal suicide and combat radar-evading drones that can travel much more than the distance from Iran to Albania and hit the target point.” Such escalatory messaging aside, Iran’s various linkages to the Balkans have not always been limited to cycles of tit-for-tat accusations, threats, and counter-accusations.

Under the pro-American shah, Tehran maintained close political as well as economic ties to most states in the Balkans, including Yugoslavia and Romania, even though the region was then in the Communist camp. The shah over four decades ago, just like many objective analysts in Tehran do today, viewed the Balkans as a bridge linking Iran to the Mediterranean Sea and Europe. Indeed, any Iranian strategic energy export policy with an eye toward customers in Europe would almost certainly involve the Balkans as a transit route. But today’s Balkan countries have had few if any serious economic interactions with Iran since 1979. The region as a whole predominantly looks to the West. And unlike the shah, the Islamist regime has never really prioritized Iran’s economic development if it clashed with its ideologically driven foreign policy.

In fact, since the end of the Cold War, much of Iran’s influence in this region has been measured by its ability to employ Islam as a policy instrument. While Iran’s use of Islam as a way to cultivate ties in parts of the Balkans is not unique, it is perhaps the most controversial actor to do so. That said, as a policy, it has hardly delivered the results Iran had hoped for.

This became most famously evident in June 2010, when Muslim-majority Bosnia-Herzegovina voted in favor of tightening sanctions on Iran at the United Nations Security Council. For the Iranians, the Bosnian vote was hugely disappointing since this was the first time in independent Bosnia’s history that Tehran had hoped for and expected solidarity from Sarajevo.

Not only had Tehran lobbied the Bosnian government up to the vote at the U.N., but Iran had been instrumental in providing funds and arms to the Bosnians during the Yugoslav civil war in the 1990s. However, when Iran asked for a favor in return, the Bosnians clearly felt that investing their future in the transatlantic community — and, thus, backing the U.S. in sanctioning Iran — was the best path forward.

For Balkan governments, the dichotomy could not have been clearer. The West offered material benefits, such as NATO and EU membership, while Iran continued to weaken due to sanctions and international isolation. And Western states were careful to make it clear that any Balkan country that provided an operational platform to Tehran would be held responsible for any Iranian action against Western interests.

In the 1990s, Western states were fearful that Tehran might create cells in the Balkans that could be activated in the event of military hostilities, such as if the U.S. struck Iran’s nascent nuclear installations. Nearly three decades later, it is not in Bosnia but in Albania that the West and Iran are most actively confronting one another. Put simply, the Iranians have failed to turn themselves into an influential actor that can shape the strategic trajectory of the countries in the region. The two cases of Bosnia and Albania demonstrates this basic reality.

Today, Albania, a close U.S. ally, has found itself on the front line of the clash between the West and Iran. For sure, the Iranian regime is angered by the MEK’s presence in Albania; but to date, there is little evidence to suggest that Tehran intends to fuel the conflict with Tirana. This could change. If the Iranian proxy war with the U.S. and Israel intensifies, the Iranians might look for ways to pressure Tirana to reconsider its open policy toward the MEK, particularly since Iran sees the group as a tool in the hands of the U.S. and Israel.

So far, Iran has apparently limited its actions against Albania to cyber operations. But those Iranian actions could eventually become more kinetic, and perhaps even involve violence on Albanian soil against the MEK and its foreign backers in the West.

Alex Vatanka is the director of the Iran Program and a senior fellow in the Frontier Europe Initiative at the Middle East Institute in Washington. His most recent book is The Battle of the Ayatollahs in Iran: The United States, Foreign Policy, and Political Rivalry Since 1979. Negar Mohtashami, a research assistant at MEI, contributed to this article.