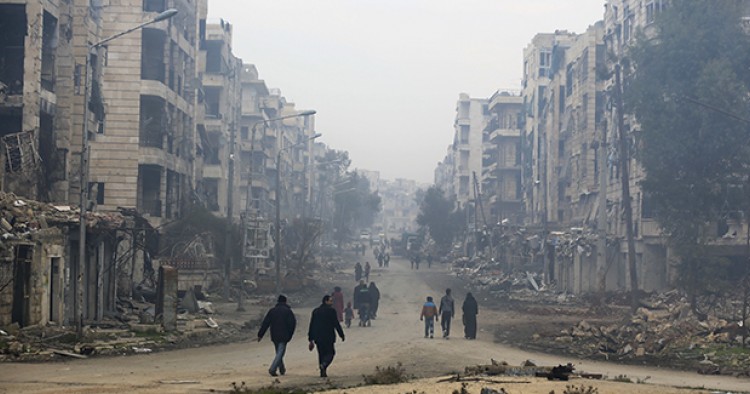 Six months after the heavily publicized defeat of Syrian rebel forces in Aleppo to the Assad government, the once magnificent metropolis and largest city of northern Syria is still reeling from the consequences of years of violent conflict. The elaborate communal, economic and material threads that for centuries had made up the social fabric underpinning the city’s wealth, as well as its physical and societal integrity, may have been irreparably damaged. Today, much of the city lies in rubble and many of its once proud inhabitants have been reduced to abject poverty. The immediate challenges of post-recapture life, from reconstruction to the Assad government’s attempts to restoring services and order, may give us a first glimpse into what Syria would look like after a complete regime-recapture.

The most visible injury to Aleppo’s splendor has been the material damage suffered in more than four years of near-constant fighting. So vast is the destruction that it is most efficiently surveyed by satellite imagery. An initial damage assessment combining both geospatial and ground-level qualitative analysis commissioned in the second half of 2016 estimated that at least one-third of housing units across the city have either suffered significant material damage or been destroyed entirely. These numbers are from before the worst onslaught in November and December. 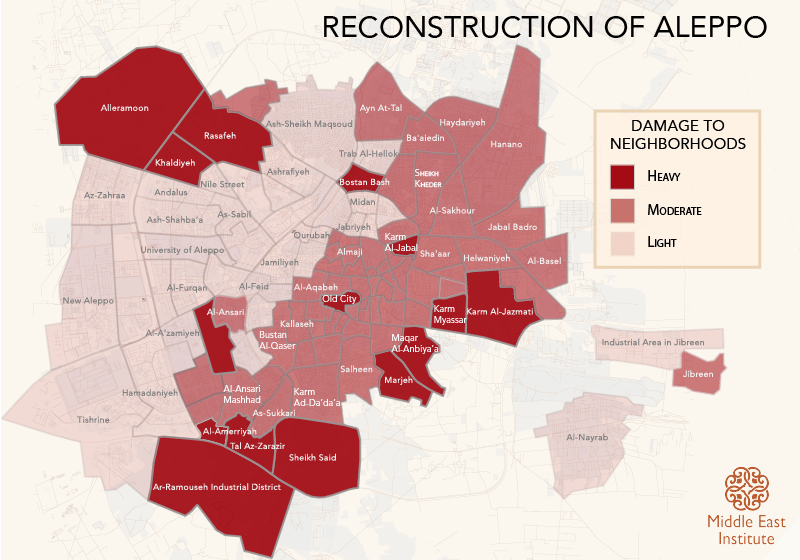 Months after the fall, international aid organizations and local authorities are only slowly foraying into these “newly accessible neighborhoods,” as the U.N. terms them. Many roads leading into the rubbled quarters remain damaged, blocked or degraded. Restoring the more than 70 kilometers of streets in need of urgent repair alone is estimated to cost more than $1 billion. A similar sum should be required to restore Aleppo’s single large thermal power station, the country’s most important electricity production facility that, prior to the war, covered 60 percent of the governorate’s needs. By comparison, the Syrian government’s entire 2017 budget amounted to no more than $5 billion.

While state media has been busy highlighting the occasional symbolic reopening of plazas, shops, and restaurants to project a sense of normalcy, the reality for Syrians in the area is far from ordinary. Only a slow trickle of civilians has returned to the once densely inhabited popular quarters of the east. As of last month, the U.N. registered 153,012 individuals as residing in the “at best damaged” formerly rebel-held communities. They are essentially functioning almost entirely without services and highly dependent on aid. Many are returnees, as well as the poorest of the poor overflowing from the overcrowded and strained eastern districts, whose population had almost doubled with IDPs during the height of the conflict.

Reflecting the unequal firepower of the warring parties, as well as the indiscriminate tactics employed by the Assad regime during the fighting, the destruction is very much unevenly distributed. Entire neighborhoods in formerly rebel-held quarters, such as al-Amerriyah, Tal az-Zarazir, Old City, and Karm al-Jabal, with all their accompanying infrastructure, have essentially been razed to the ground, while government areas only suffered sporadic damages. The city’s water and electricity infrastructure is largely defunct, and rationing remains in place for all essential goods and services.

The Political Economy of Recapture

The socio-economic, and thus political, implications of this are especially noteworthy. Most accounts of the outbreak of fighting, and the subsequent division of the city, stress the initial class divide between the more urbanite loyalist quarters in the west and popular neighborhoods to the east. While the more affluent residential areas in the west suffered mostly sporadic damage from indiscriminate rebel artillery fire, around 58 percent of popular (sha’bi) residences, primarily in the rebel-held east, have been assessed to be damaged or destroyed. Together with Assad’s notorious Presidential Decree 66— which allows for the expropriation and re-development of destroyed and “informal” settlements—this could potentially open the doors for a more permanent re-engineering of the city’s demographics by the regime.

The close interlinkage of political, economic and military power among regime militants further complicates the issue. War in Aleppo had always had a local dynamic to it, with fighters on both sides of the front lines hailing primarily from the city and its immediate environs. Among the defenders of West Aleppo was a varied medley of militia groups: Hilal al-Hilal’s Baath Brigades as well as the National Defense Forces led by former businessman and land-holder Samy Aubrey recruited from the city’s own youth.

Indeed, following a 2013 presidential decree that permitted the raising of militias for the protection of capital goods, some of the richest men in Aleppo, such as industrialist Mohamed Jemmoul, have moved into the burgeoning militia sector. With Aleppo’s industry in ruins (a famous amusement park owned by Aubrey became a notorious battle field), war profiteering is the last remaining profitable sector in Syria. Thus, after years of conflict, a new politico-economic constituency has emerged in the city.

For example, with no more than two hours a day of electricity from the public grid, more than 100 privately owned neighborhood generators have sprung up across the Western part of the city. Experience from Lebanon and Iraq show that such opportunistic entrepreneurs can quickly become a political force. This, and similar business models, are a new vested interest with which any reconstruction plan for Aleppo must contend. Rebuilding the destroyed metropolis without buy-in from loyalist powerbrokers who arose in the vacuum of war appears an unlikely prospect, especially considering the central government’s inability to curb their power and reach.

Since the recapture of the opposition-held pockets, long-standing but previously muted grievances by local residents against the armed men fighting for Assad have increasingly burst out into the open. Journalists, activists and local officials accuse the “armed gangs” of robbery, looting, murder, infighting, and especially checkpoint extortion, leading to increased prices and further humanitarian suffering inside Aleppo, as well as creating anxiety about the business environment. Reda al-Pasha of the Hezbollah-friendly Lebanese Al Mayadeen TV station was notably barred from reporting in Syria after he criticized criminal elements among the regime’s forces (especially the Tiger Forces of General Suheil Hassan, who has since risen to chief of the powerful Air Force Intelligence Directorate in Aleppo).

Even some of the most prominent regime figures in the city have added their voices in complaint. Firas Shehabi, a member of parliament and head of Syria’s Chamber of Industry, recently uploaded a video to his social media presence railing, Kalashnikov in hand, against the extortion system. An initial decree issued by Major General Ziah Saleh, head of the provincial security committee, in February aimed at expelling militias from the city, appeared to have had little effect. Recently, and following Shehabi’s intervention, Damascus is said to have intervened against the road taxes on trucking into Aleppo. The underlying power dynamics, however, remained unchanged.

Beyond local warlordism, Iran’s influence in the city continues to grow as well. The Islamic Revolutionary Guards Corps has not only consolidated its already formidable network of foreign Shiite militias, but also expanded and formalized its role among Syrian nationals across Aleppo province. Formally outside the Syrian command structure, the so-called Local Defense Forces brand, an umbrella for Iranian-controlled groups such as Liwa Imam al-Baqir, has grown to almost 26,000 militants in Aleppo province alone.

Having been exempted from Syrian army conscription and regulation, the Iranian umbrella provides opportunities, and crucial humanitarian, social and veterans services to otherwise economically destitute Aleppines. During the fall of the opposition-held eastern pocket, besides fighting on the front lines, Liwa al-Baqir ran the most important exit checkpoint for civilians fleeing the fighting. More recently, their officers have advertised themselves negotiating re-entry of displaced into the eastern districts, and leading offensives deep into the country’s interior.

In absolute terms, the reconstruction of Aleppo is clearly beyond Iran’s financial means. Still, the Islamic Republic and Hezbollah have gained tremendous legitimacy among loyalists for their role in the recapture of the city, and they appear willing to leverage this popularity into more permanent influence. In January, in the wake of the collapse of the rebel pocket, Damascus and Tehran signed five memoranda of understanding, pertaining primarily to economic investment. Aleppo governor Hossein Diyab stressed that Iran was going to “play an important role in reconstruction efforts in Syria, especially Aleppo.” While details of the arrangement are still hard to come by, the so-called “Iranian Reconstruction Authority” has publicized its first initiatives, most prominently the renovation of 55 schools it plans to restore across the Aleppo province. While the project name is clearly reminiscent of the “Iranian Committee for the Reconstruction of Lebanon” established after Hezbollah’s the 2006 war with Israel, the degree of Tehran’s actual commitment to rebuilding this very Sunni city is still unclear.

More than four years of fighting and war economy have left Aleppo a destitute city and its social fabric in rags. Considering the regime’s limited capacity and fiscal bind, the ancient metropolis is unlikely to be rebuilt, and the suffering of its citizens not permanently alleviated without international assistance. However, any eventual donor should remain conscious not only of the scale of the reconstruction problem itself, but also of the complex local political, economic and military environment, so as to not reinforce or reward the Assad regime’s absolutist aspirations.