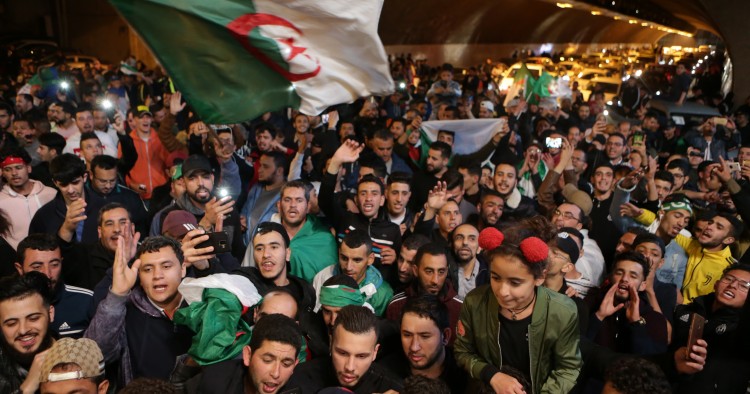 Following the resignation of 82-year-old President Abdelaziz Bouteflika in early April after weeks of mass demonstrations, the dispute between Algerian protesters and the country’s entrenched power structure has entered a new phase. The protest movement has viewed Bouteflika’s peaceful removal as an initial victory in the longer struggle to overhaul Algeria’s political edifice. But any attempt to fundamentally change the governance system and introduce a new relationship between rulers and ruled is likely to quickly come up against the will of established power-brokers, especially the military, and the ongoing dispute has the potential to escalate into violence.

The April 2nd resignation of Bouteflika, in power since 1999, garnered the expected fanfare outside Algeria. International news coverage was quick to mark the end of his 20-year reign as a tangible sign of change. And yet, in reality, the president’s removal by the same system that had allowed him to govern for so long represents a minuscule change in the greater scheme of things.

This is because of the nature of power in Algeria. Since independence, le pouvoir, a collection of aged politicians, high-ranking army officers, and members of the intelligence services, has controlled Algeria from the shadows. After fighting French colonial rule and winning independence in 1962, Algeria’s freedom movement — or the winners within it — transformed the newly liberated country into a private fiefdom to be managed through a one-party system. The same opaque power structure has held on to power ever since. It has ruled Algeria as a leaderless autocracy, where competing networks of power and influence have made all of the important decisions. In this sense, the president has always been the visible head of a complex, multi-layered system, but not necessarily its most powerful one. For decades, this governing structure has chosen presidents and removed them. It has run a semblance of parliamentary politics — using co-opted opposition parties and artificial elections — while holding firmly to real power.

And yet today, Algeria’s ageing rulers are faced with an unprecedented challenge from the population. On Tuesday, the parliament confirmed Abdelkader Bensalah, the head of the Senate, as acting president, filling the void left by Bouteflika’s resignation. According to Algeria’s constitution, the arrangement allows for a transition period of 90 days until new presidential elections can take place. Yet Bensalah is himself a regime apparatchik, and by Tuesday afternoon, students once again took to the streets of downtown Algiers to protest the move. In an evening televised speech, Bensalah promised to hold free elections. And yet Algerians, accustomed to the manipulations of the army and the several regimes it has supported, are understandably suspicious of any transition managed by the same actors that have blocked reform in the past.

As surprising as the real outcomes of the protest movement might seem to Algerians themselves, long accustomed to inhabiting the periphery of an immutable and murky political system, it is the army that now seems to be at odds with finding its role in the new Algeria.

Before repeated rounds of demonstrations led Abdelaziz Bouteflika — or those around him — to first withdraw his candidacy for a fifth term, and then leave the presidency altogether, the Algerian regime played its usual tune. The army came out pledging to maintain security. Then Prime Minister Ahmed Ouyahia reminded those on the street that peaceful protests had also been the starting point of Syria’s descent into chaos. Algerians, protesting or not, had long been used to this type of condescending tone from the country’s leadership.

But the persistence of the protest movement has transformed the Algerian people into a new political force with the capacity to enact change. As soon as it became clear that the weeks of protests would push Bouteflika aside, Army Chief of Staff Lieutenant Gaïd Salah not only moved to accelerate the process, by declaring him unfit to govern, but he also began attempting to manage any potential transition to the benefit of the army. Alongside Bouteflika’s resignation, several business oligarchs with long-standing ties to the president have been targeted by the justice system. Ali Haddad, a wealthy businessman and close Bouteflika ally, was arrested as he tried to cross the border into Tunisia in late March. The removal of the president was undoubtedly a win for the protesters, but at a deeper level, it also signaled that, for the moment, the Bouteflika clan has been vanquished by a rival grouping, one pledging allegiance to Gaïd Salah and at least part of the country’s security establishment.

After Bensalah was announced as interim president on Tuesday, a protest by students opposing his nomination was violently repressed by the police in Algiers. This encouraged more people to come out on Wednesday morning, prompting the interim president and Gaïd Salah to announce more concessions, such as the legalization of new political parties, fresh corruption probes into Bouteflika-era politicians and businessmen, and a date — July 4th— for the upcoming presidential election. But Algerians have heard all of this before. For them, those around the former president and the politicians and army officials claiming to have helped depose him are part of the same regime.

It is likely that demonstrators will continue to pressure Algeria’s caretaker rulers, attempting to dismantle the country’s opaque ruling system layer by layer. Yet the resistance from the army and other power brokers is likely to increase as the process threatens their own existence. According to one opposition activist in Algiers, Salah-Eddine Sidhoum, the army could ramp up repression as a means to rein in protesters.

Rather than holding a presidential election under the umbrella of the existing military autocracy, what many protesters and opposition figures are demanding is that fresh elections chose a constituent assembly that can write a new constitution for the country and establish the foundations for a different political system. If Algeria’s recent history is any guide, though, the armed forces and security apparatus would rather escalate the conflict to justify a muscular response than allow for a process of reform that risks their role at the top of the power structure. Stuck between the demands of the street and the self-preservation instincts of its aged autocrats, Algeria is likely headed for a confrontation.

Francisco Serrano is a journalist, writer, and analyst. His work focuses on North Africa, the broader Middle East, and Latin America. ​​​​The views he expresses are strictly his own.