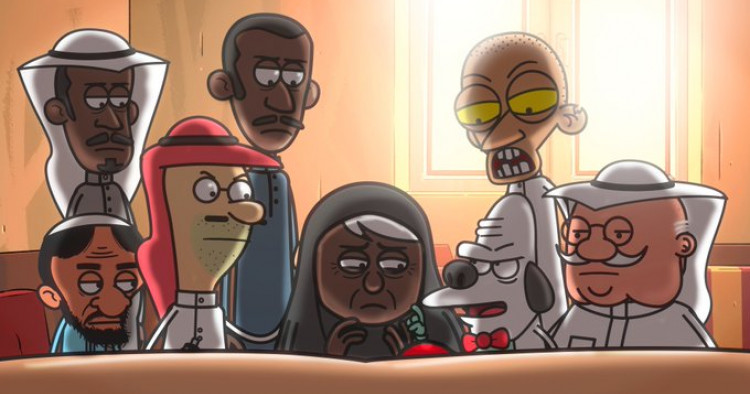 In Masameer County, the Netflix animated television series taking Saudi Arabia by storm,1 one young Saudi man, Saad, awakens another, Saltooh, with affectionate words while lying under the covers alongside him. Saltooh, startled by his friend’s presence, implores him to move, adding, “I’m not wearing any underpants.” “It’s ok,” Saad replies, “me, neither.”2

Although neither man is shown unclothed, Saad’s response is striking for a series set in a nation where homosexuality remains taboo, and the law can punish it severely.  But the response also reveals how the country’s creative class, over the last two decades,3 has posed awareness-raising questions while reevaluating the assumptions and terms used to discuss homosexuality and other contentious social issues, including whether women should be allowed to drive.4 In fact, in 2020, Exit 7, a prime-time Ramadan TV series depicting middle-class Saudi life, not only broke taboos about Israel but also included a pioneering father-daughter conversation in which the daughter defends homosexual rights.5 These types of debates, as Deborah Wheeler argues in Digital Resistance in the Middle East, occur “beneath the surfaces of power” and “beyond organized movements” in the country.6 This is not the Saudi Arabia of clerics, oil, and the royal family, but the one experienced by everyday people.

Saad, Saltooh, other ordinary Saudis, and Trad, a talking dog, are the stars of Masameer County. We see them in offices, restaurants, and distinctly Saudi spaces — such as an Istirāḥa: the living-room like area where Saudis socialize. Trad, Saltooh, and Saad drive a white pickup truck, a symbol of Saudi Bedouin masculinity,7 and eat chicken, a cornerstone of the country’s cuisine. In fact, Saad enjoys chicken so much that the owner of a chain of fried chicken restaurants thwarts his proposed marriage to a health-food activist.8 In another episode, we again see the influence of big business when the owners of the world’s biggest pharmaceutical company seek to stop a famous producer from making his TV shows because they make Saudis happy. “And happy people,” the company’s president snarls, “don’t pop pills!” 9

Other Saudis find themselves in messes of their own making, such as a young man whose late-night quest to eat ice cream devolves into a nightmarish trip. Ignoring his bedtime story’s warning against greed, he pursues his objective relentlessly, going from an electronics store to a brothel with an androgenous sex worker to a citadel housing the Islamic State’s leader. Tragically, as he is finally about to enjoy his ice cream, a terrorist destroys the U.S. helicopter flying him home.10

Masameer County also explores how expanded social freedoms for young people and for women impact older men, the people who traditionally dominate Saudi society. Two of them, Munir and Khalaf, find that their debates about Islam and secularism no longer resonate with Saudis as they once did — a reality Munir discovers when he visits a café and sees a scene that would have been unthinkable a decade earlier: men and women dressed stylishly and interacting with one another in public while listening to music. To revive their public roles, Munir and Khalaf assume the leadership of two sides debating an issue critical to Saudi youth: whether a soccer match should be moved from a prominent stadium so a K-Pop group can perform there.11

But just as Munir and Khalaf lead their rival sides into an apocalyptic battle over the future of the stadium, they and their followers are bombed in an operation ordered by Abu Abdul Rahman, the head of the Center for Reducing the National Burden. He exemplifies the stereotype of a bungling male bureaucrat who nonetheless thinks that he is brilliant, even understanding women and how they drive. After all, he authored The Courage to Understand the Mentality of Women.12

Abu Abdul Rahman’s boss, however, is one of the rising class of professional women. She has little patience for him missing key meetings and wasting time. As she coldly observes during a visit to his office, he should be fired because he is contributing to the problem that he is tasked with solving — namely, reducing national consumption and increasing productivity. To save his position, he orders a series of harebrained schemes, ultimately succeeding by bombing Munir, Khalaf, and their followers.13

What Masameer County exemplifies is the freedom of the Saudi artistic imagination, which is shocking, stunning, hilarious, and wild. But the series also provides society a framework for discussing contentious issues that can still be presented as “apolitical.” National leaders are not discussed, and nobody is really blamed for the problems facing society. This choice allows Malik Nejer, the show’s producer, to broaden the audience for his animated series, one that is also reflected in its blending of highbrow and lowbrow humor. Indeed, Nejer intends for Masameer County’s comedy to be “all in the family,” to cite the title of the U.S. sitcom that adopted a similar mindset.

If we limit our focus to those at the forefront of the kingdom, we may overlook Masameer County and other creative works, which reflect how millions of Saudis view everyday life in their society. Each episode of Nejer’s series begins with a message essentially stating this point: “The Characters and events are fictional but are based on reality.” In this sense, Nejer and his colleagues aspire to be truth-tellers, who do not fully “own” the meaning of their art. They are social mirrors, whose job, to paraphrase the late American comedian Joan Rivers, is to “say the things that everyone else has thought but has not really verbalized.”14

Sean Foley is a professor of history at Middle Tennessee State University and specializes in the history of the Middle East and the cultural, political, and religious trends in the wider Islamic world. His most recent book, Changing Saudi Arabia: Art, Culture, and Society in the Kingdom, was published by Lynne Rienner Publishers in 2019. The opinions expressed in this piece are his own.