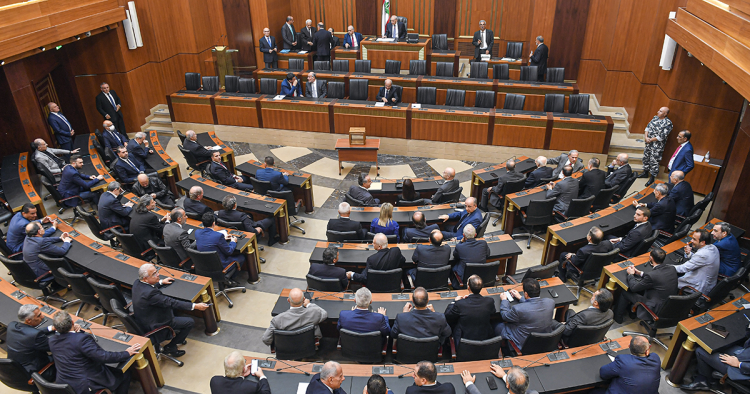 Parliamentary systems allow for majority coalitions to govern, made up of parties that are not always required to get along — let alone agree on every issue. The whole purpose of crossing a majority threshold (in Lebanon’s case 64 seats out of a 128-seat chamber) is to set aside smaller differences and work together through an alliance.

In other words, compromise.

No minority bloc can go it alone, and politics requires cooperation. Yet in Lebanon’s case, national unity consensus — often a result of geopolitical factors and regional settlement — places groups across the political spectrum, together, in a status quo best described as paralysis.

A direct challenge to Lebanon’s rampant corruption, ineptitude, and mismanagement came to the fore on Oct. 17, 2019, when rare nationwide protests demanded an end to stagnation. The unifying message of Oct. 17 — kellun yaane kellun or “all means all” — targeted the entire political class.

Following an economic downfall coupled with hyperinflation that drove the majority of the population into poverty, a pandemic that further exacerbated an already fragile situation, and a port explosion on Aug. 4, 2020 that decimated Beirut — the largest non-nuclear blast in modern history — a “Change” bloc was voted into parliament in last May’s elections.

Comprising 13 deputies from across the country, “Change” disassociated themselves from “both sides” of a political class they were demonstrating against. They equated the two alliances: “March 14” or what is now termed “Opposition,” representing a grouping of older parties that took inspiration from the March 14, 2005 demonstration (an uprising calling for an end to Syrian occupation), and “March 8,” which was, in essence, a pro-Syria rally that formed a week earlier on March 8, 2005.

Over the past 17 years Lebanon has witnessed a string of assassinations targeting March 14 figures, the July 2006 war between Hezbollah and Israel, an 18-month-long March 8-backed sit-in across downtown Beirut, the May 2008 clashes between Hezbollah fighters and March 14 supporters, and, despite two parliamentary majority victories by the March 14 alliance in 2005 and 2009, governance by national unity including both March 8 and March 14 figures.

That national unity led many “Change” advocates to chastise both March 8 and March 14 as one and the same. And an emphasis on corruption outweighed discussions of what remains a necessity for reform and institutional rehabilitation: an independent and sovereign state.

“Change” is an economics-driven pursuit for local accountability and social justice, and “Opposition” is a politically focused mission with geopolitics at its heart.

“Change” cannot reform the system on its own, and “Opposition” cannot challenge regional considerations alone. Together, however, they potentially hold a narrow majority — 65 seats, combined — against the 63 belonging to a Hezbollah-led coalition.

And there is an opportunity, today, to bring these two movements together through a parliamentary alliance.

Such an alliance would be better placed to acquire Lebanon’s highest positions of power, including president, prime minister, and speaker of parliament. And most importantly, it would also be able to appeal for international help in areas where the state is unable to deliver.

In addition to demands for economic reform and fiscal responsibility in line with an IMF deal that has yet to materialize, the international community must signal its willingness to offer assistance with the port blast investigation. A joint struggle against impunity is shared by “Change” and “Opposition.”

Investigative judge Tarek Bitar continues to oversee the Beirut port blast investigation. His initial momentum was stalled over a year ago after direct threats were made by Hezbollah official Wafiq Safa.

Despite widespread support for Bitar’s mission among the port blast victims’ families, a Hezbollah-led protest against him in October 2021 led to armed clashes with the Lebanese army and Lebanese Forces partisans. These were a mirror reflection of the street battles that took place in Beirut in May 2008 after the then-March 14 government attempted to dislodge a parallel telecommunications network used by Hezbollah and fire an airport security official close to that group.

Reports issued by Human Rights Watch advocating for U.N. Human Rights Council involvement and pleas from victims’ families for international assistance have been met with no answer. “Change” MPs regularly protest alongside relatives of the over 200 victims. Yet without a parliamentary majority that sees the state’s direct involvement as a necessity, justice will remain elusive.

The Lebanese state needs to officially request U.N. involvement for a potential international investigation. And the reality is that no country can override the Lebanese state, no matter how paralyzed it is today. Therein lies the conundrum for “Change”: to go it alone with no little to no effect or reconsider their politics with an “Opposition” they recently ran against.

If history points in any direction, it is that a local majority alliance matters. And that materialized in the aftermath of former Prime Minister Rafik Hariri’s assassination.

In June 2005, four months after Hariri’s death — and three months after the March 14, 2005 demonstration against Syrian occupation — parliamentary elections (the first in a generation without Damascus’ intervention) ushered in an “anti-Syria” coalition.

Alongside independents, left-leaning intelligentsia, and a more right-leaning Qornet-Shehwen collective, 69 members joined hands in parliament. The success emanating from that majority was an insistence on international involvement in uncovering Rafik Hariri’s killers, acknowledging the local judicial authority’s limitations by supporting a tribunal’s jurisdiction outside of Lebanon’s geography, shielding due process from intrusion and intimidation.

And that is a key point worth emphasizing: In the face of regular violence targeting officials, the state was still capable of following through.

Lebanon adhered to the investigation’s deliberations. Prior to his own assassination in January 2008, Internal Security Forces (ISF) intelligence officer Wissam Eid provided critical cellular data used during the investigation.

By March 2006, UNSCR 1664 delineated an international tribunal’s jurisdiction. In light of Speaker of Parliament Nabih Berri’s refusal to convene any session that would discuss that resolution’s local acceptance, then-Prime Minister Fouad Siniora expressed his cabinet’s constraints in written form to the U.N., and to that effect, UNSCR 1757 — authorizing the establishment of the Special Tribunal for Lebanon (STL) — was passed under Chapter VII.

The alleged involvement of Lebanese security officials (including the former head of Lebanon’s General Security, Jamil al-Sayyed) led to prison sentences from 2005-09, and when the investigators rescinded their recommendation, the Lebanese state abided, accordingly, with their release.

Verdicts against four Hezbollah members were finally issued in December 2020. Irrespective of the Lebanese state’s unwillingness (and inability) to arrest two of the four individuals, who remain alive and at large — and the lukewarm reception provided by local officials — the first step toward accountability was delivered. The truth was uncovered, with facts made available.

Tarek Bitar, handling the port blast investigation on his own, cannot fare any better.

Recreating the circumstances that led to the STL to enable an international port blast investigation would be a daunting challenge, requiring U.N. Security Council approval of a request by a local majority coalition and adherence to its implementation.

That opportunity may be tenuous. But standing against political violence and picking up from a journey that began in 2005 should not be negotiable.

A majority worth embracing would work to reclaim a battered state with “Change” and “Opposition” in alliance.

Ronnie Chatah hosts The Beirut Banyan podcast, a series of storytelling and conversation-driven episodes covering all that is modern Lebanese history. He founded the WalkBeirut tour, an outdoor narration of Beirut’s rich and troubled past. His recent writings have appeared in NOWLebanon, L’Orient Today, The National, and Newlines magazine.