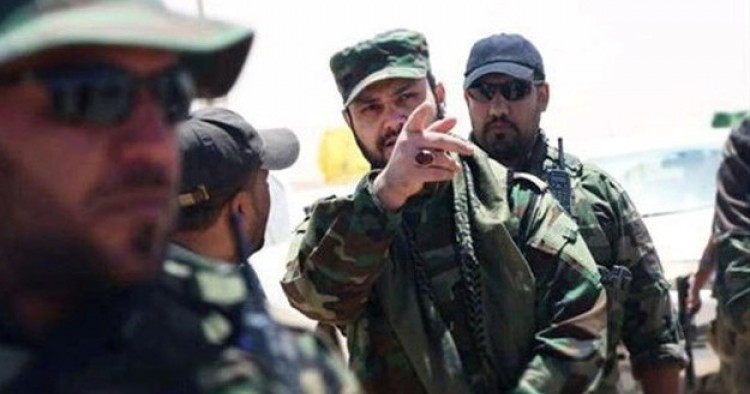 The leader of an Iraqi militia group with close ties to Iran traveled to Lebanon this week to voice solidarity with Hezbollah and pledged to stand with the “axis of resistance” in any future wars with Israel. Akram al-Kaabi, the head of Harakat al-Nujaba, made the remarks to reporters in southern Beirut after visiting the tomb of late Hezbollah commander Imad Mughniyeh, who was allegedly killed by Israel. “We, at the axis of resistance, will mobilize forces against Israel at any place. And until all threats are removed, the Zionist regime [Israel] is destroyed and the sacred Quds [Jerusalem] is completely liberated, we will not take a break and will fight alongside the Syrian Army and the resistance fighters in all battles against the aggressors.”

Kaabi, who was designed by the United States in 2008 for promoting violence in Iraq, also hailed the shooting down of an Israeli F-16 fighter jet by the Syrian military over the weekend. “The Syrian Army established its power and supremacy over the occupying enemy,” he claimed.

The Nujaba website added that Kaabi’s public appearance in Beirut is further proof that earlier reports indicating that Israeli fighter jets had targeted him near Damascus were false.

Comment: Harakat al-Nujaba is a unit within Iraq’s Popular Mobilization Force (PMF), but it receives its orders from Tehran rather than Baghdad. The group operates both in Syria and Iraq under the leadership of Qassem Soleimani, the head of the IRGC Quds Force. Kaabi makes no secret of his allegiance to Iran’s Supreme Leader Ali Khamenei or his close relationship with Soleimani. Kaabi once famously stated that his forces would topple the Baghdad government if ordered by Khamenei.

The Nujaba movement also has close ties with the Lebanese Hezbollah. The two have been fighting alongside each other in Syria to prop up the embattled regime of Bashar al-Assad since 2013. Hezbollah has also trained Nujaba fighters and commanders in both Iraq and Syria.

Kaabi travels frequently to Iran and Lebanon to meet high-ranking Iranian officials, including Supreme Leader Ali Khamenei and Hezbollah Leader Hassan Nasrallah. In October, he met with the top Shiite sheikh in Lebanon, Afif al-Nabulsi, the cleric who notoriously gave Hezbollah the religious authorization to participate in Lebanese politics. In November, Kaabi also held a meeting in Lebanon with the head of Hezbollah’s Executive Council, Hashim Safi Al Din, in which they stressed the need to preserve the achievements of the Islamic resistance in Iraq, Lebanon, and Syria, and confront the countries that are trying to eliminate them, especially Israel and Saudi Arabia.

With the war in Syria winding down, the Nujaba group has already shifted its attention to Israel. In March, the group announced the creation of a new brigade to seize the Golan Heights – claiming that “latest victories” against the Islamic State and Sunni rebels in Iraq and Syria have allowed the group and its allies to focus on Israel. Leaders of the group claimed that members of the new brigade are highly-trained, well-equipped and capable of fighting the Jewish state. “Israel is weaker than a spider web. Islamic resistance is capable of confronting the axis of evil and annihilating the occupying Zionist regime,” Kaabi told Lebanon-based Arabic-language al-Mayadeen news network.

Many Lebanese officials are concerned that the increasingly close links between Hezbollah and other Iranian-backed regional militia groups could provoke another Israeli military operation into Lebanon.

Last month, Lebanese judicial authorities issued an arrest warrant for Qais al-Khazali, the leader of Asa’ib Ahl al-Haq, Iran’s Fars News Agency reported. Quoting Lebanese sources, Fars added that the Lebanese Army and General Security Directorate have also ordered all relevant authorities to arrest the Iraqi militia commander if he reenters Lebanon. They allege that Khazali last year had entered Lebanon illegally. Lebanese Prime Minister Saad Hariri has also called for a travel ban on the Iran-linked militia commander. Khazali visited the Lebanese-Israeli border in December and pledged to support Hezbollah in a potential war against Israel in the future.

But Kaabi’s trip to Beirut indicates that the Lebanese government, under pressure from Hezbollah, may not be able to prevent Iranian-supported regional militia leaders from coming to Lebanon.

Khazali’s trip to southern Lebanon was another indication that Iranian-backed Shiite militias from Iraq and across the region would join Hezbollah in any potential war with Israel in the future. Sayyed Hassan Nasrallah, Hezbollah’s leader, warned last year that any war launched by Israel against Syria and Lebanon would bring in Shiite fighters from different regional countries, including Iraq and Iran.