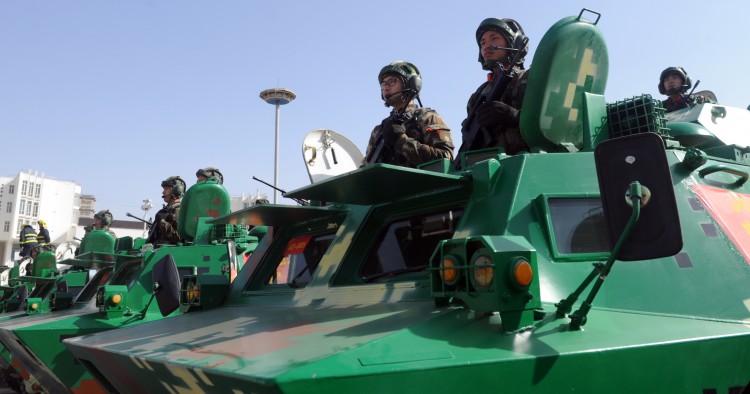 Unlike other cases of repression against Muslims around the world, such as Myanmar, the “cultural cleansing” taking place in China’s Xinjiang Province (known by separatists as East Turkestan) has not been officially condemned by the Gulf monarchies. This silence is mostly a result of their economic interdependence with China, which has prompted concerns about retribution from Beijing if Gulf Cooperation Council (GCC) member states were to stand up to China over the plight of its Muslim minority. Not lost in the equation is the fact that Saudi Arabia and other Arabian Peninsula monarchies have faced strong criticism from the West on human rights grounds, giving officials in the GCC more incentive to avoid criticizing Beijing on sensitive issues that China views as internal matters.

In 2018 international attention on China’s crackdown on Uighurs and other Muslim minority groups increased significantly. In August, the United Nations expressed deep concerns about the reported 1 million Uighurs held in internment camps across western China, four months after American diplomats highlighted concerns over increasing levels of repression in Xinjiang. The global outcry has intensified following other reports that Chinese authorities have banned veils and forced Uighurs to cut off their beards, eat pork, and drink alcohol. Evidence has also emerged that the Chinese government is tracking cellphone activity in Xinjiang while pressuring the Uighur diaspora to provide personal information by threatening family members in western China if they do not comply.

Like many Muslim-majority countries around the world, GCC states have deep economic ties with China that could, potentially, be jeopardized if they shine a spotlight on human rights violations in Xinjiang.

Saudi Arabia has been China’s number one crude oil supplier since 2002, and China is the kingdom’s top destination for oil exports. All Gulf states have joined Saudi Arabia in making their own geo-economic pivots to the East and forging strong commercial ties with Beijing. China is the United Arab Emirates’ second-largest trading partner and its number one source of imports. China’s ambitious plans for the Belt and Road Initiative also offer the GCC states lucrative opportunities in the areas of finance, trade, and infrastructure linking Asia and Europe.

With US demand for Gulf oil set to fall in the coming years as Chinese demand is expected to rise, GCC officials see China as their most reliable partner when it comes to security of demand. Thus, as Gulf governments see it, the issue of oppression in western China is not important enough to justify taking the risk of addressing in any international forum.

Beyond their interests in securing deeper economic and energy ties with China, GCC states have other incentives to remain silent on Beijing’s crackdown as well. Given their extreme sensitivity to outside scrutiny of their own human rights violations, the Gulf monarchies welcome China’s foreign policy doctrine of “non-interference” and want to reciprocate.

China also brought itself greater goodwill by remaining silent throughout the Khashoggi saga last year, and Crown Prince Mohammed bin Salman (MbS) will doubtless remember which governments and world leaders stood by him during what has been his greatest challenge on the international stage to date. Put simply, when it comes to Sino-Gulf relations, Beijing’s practice of not bringing up human rights-related issues seems to have paid off.

The model of “authoritarian stability” advocated by both the GCC and China also factors into the Gulf monarchies’ decision to avoid pressing the issue. According to the Chinese government’s narrative, it has taken the necessary actions in Xinjiang to protect the country from Islamic extremism and terrorism. With a strong focus on stability over individual rights, China approaches security issues in a way that resonates with the Gulf regimes, which also prioritize preservation of the status quo above human rights.

GCC states, particularly Saudi Arabia, are seeking to learn from China and copy important aspects of its legal system, which gives the Gulf monarchies an even stronger interest in avoiding problems as they seek to deepen their legal relations with Beijing. Last year, for example, Riyadh’s vice minister of justice and his counterpart from Beijing signed a memorandum of cooperation to share judicial information and expertise.

In addition, as Cindy Yu opined, the Saudi crown prince’s Vision 2030 reforms are generally “on the same path as Beijing” while truly distinct from the West’s values. China is, according to Yu, a “perfect prototype” for Saudi Arabia where the “people choose riches over freedom.” To that point, China’s ambassador to Riyadh, Li Huaxin, praised MbS for the wave of arrests at the Ritz-Carlton in Riyadh, claiming that the “anti-corruption” drive would benefit the kingdom’s foreign investment climate due to perceived improvements in the “rule of law.”

The GCC states’ silence on Xinjiang should also be understood within the context of the mainstream media in the greater Arab world, which has not paid much attention to western China. The Chinese authorities closely monitor and regulate foreign journalists’ work in Xinjiang, so the outside world has, until relatively recently, had little access to information. In the Gulf region, there is a general lack of awareness about the plight of the Uighurs, and even extremists and jihadist groups from the Arab world, which often dwell on injustices against Muslims in other parts of the world, pay little attention to Xinjiang.

The one Muslim-majority state that has condemned China on the issue of human rights in Xinjiang is Turkey. Yet key lessons learned from Ankara’s stance on this matter inform the GCC states’ decision to stay silent.

Ten years ago, Recep Tayyip Erdogan, Turkey’s then prime minister, went as far as to accuse China of waging a “kind of genocide” in Xinjiang against the Uighurs, who share ethnic, linguistic, cultural, and religious ties with Turks. Ankara’s strong language regarding the Uighurs’ plight, however, created significant tension in Sino-Turkish relations, especially after Turkish officials began offering Uighur refugees shelter in their country. Due to a host of issues, including the failed July 15, 2016 coup plot, which prompted Turkey to hedge its bets on the West by deepening ties with Beijing (along with Moscow and Tehran), Turkish officials have avoided speaking out on Islam, Uighur identity, and human rights in Xinjiang in recent years. Nonetheless, China’s leadership has not forgotten Turkey’s support of the Uighurs in Xinjiang, and the GCC states are keen to avoid creating friction in their ties with Beijing.

Beijing’s “war on terror” in western China likely constitutes the harshest campaign of forced social reengineering in the post-Mao Tse-tung period. Although portrayed by Chinese officials as a “securitization campaign” or a “pacification drive,” the crackdown on Muslims in Xinjiang is more of an effort at coerced ethnic assimilation.

China’s radical “anti-extremism” strategies pose a dilemma for Saudi Arabia and other GCC states. While their silence in the face of large-scale violations of Chinese Muslims’ rights may undermine the credibility and legitimacy of their claims to defend the greater global Muslim community, they are likely to keep quiet given the GCC’s growing economic and geopolitical ties with China. Moreover, even if the GCC states were to stand up to Beijing over the plight of its Muslim minority, it is unclear what this would entail and what, specifically, they would expect to gain from such a stance.

Looking ahead, as China continues its economic and geopolitical ascendancy, Beijing’s relations with the GCC states will deepen. At a time when the U.S. administration’s foreign policy is confusing and incoherent, the Gulf monarchies are looking to China to hedge their bets on Washington amid the unpredictable Trump presidency. Given how much the Gulf regimes value their relations with Beijing, the Chinese leadership understands that it has little reason to worry about a potential crisis in Beijing-GCC relations stemming from developments in Xinjiang, even as the situation there has fueled an outcry from Western governments and human rights organizations worldwide.

Photo by VCG/VCG via Getty Images