Are the Kremlin’s gains in the Middle East sustainable? 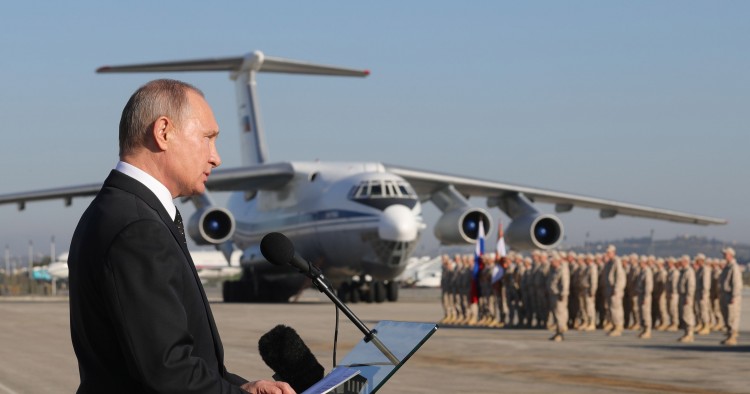 The military campaign in Syria marked a turning point for Russia’s reemergence as a power in the Middle East. Taking advantage of the opportunities presented by Western failures, the Kremlin’s tactical approach has seen it make gains across the region, although these may be more limited and reversible — and Moscow more vulnerable — than is often thought.

The post-Crimean reality and collapse of oil prices marked a paradigm shift for Russian foreign policy. Rapprochement with the West, which seemed to be set in stone since the time of perestroika, fell victim to the Kremlin’s growing global ambitions and reactionary politics. Syria, a war-torn country in a near-Hobbesian state of nature with countless militant groups fighting one another, emerged as an ideal platform for Russia to boost its international political capital after the fiasco in eastern Ukraine. In the end, the bet paid off and it turned into a major victory for the Kremlin.

In 2015 Syria provided an opportunity for the Russian army to test its military tactics and showcase its new, state-of-the-art technologies, while effectively boosting its geopolitical standing at the same time. With no one to match them, the outcome of the campaign was predetermined. The subsequent retreat of the U.S. from the Middle East under the Trump administration further encouraged the Kremlin to simply take what it wants.

Russia’s gains on the ground were complemented by its evolving diplomatic relations with major regional powers that had secured stakes in Syria. To maximize its gains, Moscow has skillfully utilized a strategy of impartial intermediation, acting as a partner to everyone and a friend to no one. The approach has also encompassed the Kremlin’s broader — and self-proclaimed — role as the fixer of the post-Arab Spring chaos.

It’s hard to say whether the Kremlin had expected such a positive outcome when it first got involved in Syria four years ago. In describing the return on the risk Russia took in the Middle East, President Vladimir Putin said the upside turned out to be bigger than he had expected and allowed Russia to stabilize the situation in the region and establish good working relations with all countries. Looking across the region, however — from Russia’s support for Libyan strongman Khalifa Hifter and its best relations with Cairo in decades to multibillion-dollar investments from GCC monarchies and its use of private military companies in Sudan — few analysts would have predicted that Moscow would be playing such a major role today.

Public opinion polling from Zogby Research Services has found a significant increase in Russia’s favorability throughout the Middle East since 2016, with an average increase of 13 points compared to the previous survey. According to the Arab Youth Survey 2018, the largest sample of public opinion among young people in the Middle East, Russia is increasingly regarded as the top non-Arab ally, with 20% seeing it as a best friend.

But while the Kremlin’s achievements are indisputable, the question arises whether they are sustainable. The answer lies in Russia’s own perception of its new role in the Middle East and the degree of reciprocity throughout the region.

The imposition of international sanctions and the subsequent domestic economic slump dramatically altered Russian foreign policy, and the country clearly didn’t emerge stronger as a result. Russia’s economy was much more stable and attractive before Crimea than it was after. Moreover, if it really wanted to play a role as a leading power in the Middle East, Moscow already had a good chance to do so — and arguably it could have managed it without needing to put so many boots on the ground in Syria.

The experience of Ukraine’s Maidan encouraged the Russian leadership to revolutionize its foreign policy, as the country took on new roles, including the defender of traditional values, the promoter of the multipolar world, and the protector of those suffering from alleged Western neo-imperialism.

Although for a number of right-wing groups and nativists of all stripes that stood in opposition to liberal values this new Russia seemed like an ideal society, the country’s new image was best received in the Middle East. In a short period of time, Putin went from a pariah and enemy of the ummah into a model strongman capable of rescuing the country from chaos and restoring its global prestige, while also providing an alternative to the Western-style democracy that was widely blamed for the misfortunes of the Arab Spring.

Russia’s perception throughout the Middle East has improved, but in much of the rest of the world Moscow is seen as increasingly moving away from the European orbit and toward greater despotism. Although Putin’s realpolitik worked out, it didn’t resurrect 19th-century policy from the ashes, but rather saw Russia revert backward.

The notorious handshake between President Putin and Saudi Crown Prince Mohammed bin Salman and Moscow’s close ties with strongmen in Egypt and Turkey all cast a dark shadow on a modern Russia, and increasingly the country seems to have nothing in common with Europe, aside from geographical proximity. Although such an image might have short-term benefits when it comes to building bridges with similar regimes and societies, its long-term attractiveness seems rather dubious.

While Russia’s current stance is helpful in boosting relations in the Middle East, it is unclear for how long will it work. Russia’s popularity can’t be compared with that of Western liberal society, which remains a role model for many, and is no match in terms of its hard and soft power. As a result, while Russia’s return to the Middle East was made possible by the retreat of the West, it could be reversed just as quickly if the West embraces a more proactive stance in the region. Were it to do so, Russia’s current edge will be of little help.

In other words, Russia has managed to expand its position in Middle East, but when it comes to truly securing a role as a regional power, it seems unlikely that the Kremlin has any trump cards left to play. Moreover, the winds of change will start blowing again at some point, and in the long term Moscow’s growing resemblance to the regimes of the Middle East might actually become a self-inflicted wound. Coupled with lackluster economic growth and increasing public pressure linked to widespread domestic corruption, it is hard to imagine that, apart from the Kremlin’s hard power and some personal ties on the leadership level, there are other factors capable of sustaining Russia’s gains.

Dmitriy Frolovskiy is a political analyst and consultant on policy and strategy in the Middle East and Central Asia. The views expressed in this article are his own.