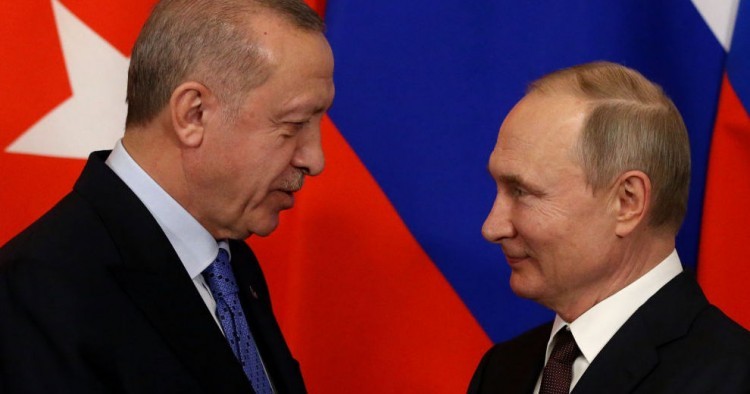 On July 12, the Armenian and the Azerbaijani armed forces started a border skirmish. Fighting went on for several days, leaving at least 16 dead in its wake. Armenian and Azerbaijani authorities have been trading accusations ever since, rallying their respective publics behind the flag. Remarkably enough, the two sides are facing off outside the disputed region of Nagorno-Karabakh, the usual flashpoint. This time around the flare-up took place well to the north, where Armenia’s Tavush region meets Azerbaijan’s Tovuz district. Georgia is next door, as are critical infrastructure links running from Azerbaijan to Turkey through its territory. Indeed, the Baku-Tbilisi-Ceyhan oil pipeline, the South Caucasus gas pipeline, and the Baku-Tbilisi-Kars railway all run parallel to the Georgian-Armenian border.

It is little wonder then that the crisis caught Turkey’s attention. On July 17, all parliamentary parties in Ankara, bar the pro-Kurdish Peoples’ Democratic Party (HDP), issued a statement condemning Armenia’s actions. Foreign Minister Mevlut Cavusoglu and Defense Minister Hulusi Akar issued strongly worded warnings and pledged support for the Azeri side. Yet, as expected, it was President Recep Tayyip Erdogan who fired the opening salvo. Two days into the skirmishes, he made a thinly veiled reference to Russia. The fact that fighting took place far away from the contact line in Nagorno-Karabakh, Erdogan opined, indicated Armenians had attacked Azerbaijan deliberately. He observed such a move was “beyond Armenia’s caliber.” As a result, analysts started wondering whether this was a sign of rising tensions between Moscow and Ankara or indeed, whether Vladimir Putin and Erdogan are about to extend their geopolitical horse trading in Syria and Libya to the South Caucasus. That is not very likely for a number of reasons, however.

Firstly, Russia holds more cards than Turkey. It is a formal ally of Armenia within the Collective Security Treaty Organization (CSTO) and maintains military installations and deployments on its territory. Its base at Gyumri, right next to the Turkish border, was upgraded during the brief crisis in 2015-16 following the shoot-down of a Russian military aircraft along the Turkish-Syrian border. Russian guards patrol Armenian borders alongside their local counterparts. Armenia is part of the Eurasian Economic Union (EEU). Russia co-chairs the so-called Minsk Group in OSCE dealing with Nagorno-Karabakh together with France and the U.S., while Turkey is only a member.

But despite Russia’s close ties with Armenia, Moscow seeks to play a balanced role and avoid taking sides as it has cordial ties with Azerbaijan as well. The two countries cooperate in several areas including military partnership, energy, and cross-border-security. The Azeris generally avoid Russian-dominated multilateral structures such as CSTO and EEU, instead favoring bilateral cooperation. Azeri President Ilham Aliyev makes positive statements with regard to Moscow’s role in the conflict with Armenia.

Second, in contrast to Turkey, Russia wears the mantle of impartial arbiter between the two sides. As the Russian expert Sergei Markedonov notes, Moscow’s circumspect position on Nagorno-Karabakh contrasts with its assertive behavior in other post-Soviet flashpoints, from Crimea to South Ossetia. Moscow is cautious not to pick sides because it wants to keep Azerbaijan where it is: out of the Western orbit. Siding with Armenia, Moscow fears, would not only jeopardize Russia’s cordial relations with Azerbaijan but it would push Baku to seek Western help. Instead, Russia wants to keep its options open and remain an indispensable partner for both Azerbaijan and Armenia, which remains highly dependent on its patronage. That is true even for a leader like Armenian Prime Minister Nikol Pashinyan, who was propelled to power by a color revolution of sorts, the kind of event the Kremlin, as a rule, militates against.

Instead of picking sides or escalating tensions, Putin wants to play the mediator role. At a meeting of the country’s Security Council on July 17, he stated his readiness to intervene as third-party broker. Though the Kremlin cannot control either Yerevan or Baku, it can draw red lines, knock heads together, and dial down tensions. Russia’s intervention played an instrumental role during the so-called April war of 2016, the deadliest escalation of the Nagorno-Karabakh conflict since a cease-fire came in force in 1994. It also showed support during several rounds of talks between Aliyev and Pashinyan, the first leader in Yerevan since independence who doesn’t hail from Nagorno-Karabakh, in 2018-19.

By contrast, the calculations for Erdogan are quite different. He has long used assertive foreign policy to galvanize his base at home. Getting tough with Armenia would certainly affirm his nationalist credentials, but backing up his tough rhetoric with action carries risks. Turkey is already militarily involved in several conflicts, including Syria and Libya, in which Turkey and Russia back opposing fronts. Opening a third, eastern front would a step too far, even for Erdogan. Militarily siding with Azerbaijan carry other risks for Turkey as well. The current Armenian government has sought to distance itself from Moscow, but if Ankara puts its military weight behind Baku, Yerevan might be forced to ally itself closely with Moscow. But given Erdogan’s nationalist agenda and the close energy and defense ties between the two countries, Ankara is under pressure to provide diplomatic and military assistance to Azerbaijan if Baku decides to ramp up pressure on Armenia. With the signing of the Agreement on Strategic Partnership and Mutual Support in 2010, the two countries pledged to support each other in the event of a military attack or aggression against either nation. Turkey might provide Azerbaijan military support in such a scenario. Reportedly, Turkish F16s started patrolling the Turkey-Armenia border. But a Turkish intervention beyond that is unlikely, and heated rhetoric in Ankara does not imply a showdown with Russia.

In April 2016, Russia and Turkey avoided being dragged into the “four-day war” in Nagorno-Karabakh at a time when they were at loggerheads in Syria. That is probably a preference they share at present too. Rather than pick a fight with the Russians, Erdogan will likely be happy to see Putin step in to calm things down in the South Caucasus. Indeed, the situation already appears to be moving that direction, with Putin and Erdogan speaking by phone on July 27 and the Kremlin saying afterwards that “readiness was expressed to coordinate efforts for stabilization in the region.”

Gönül Tol is the director of MEI's Turkey Program and senior fellow for Frontier Europe Initiative. Dimitar Bechev is a senior fellow with the Atlantic Council’s Eurasia Center and a research fellow at the Center of Slavic, Eurasian, and East European Studies at the University of North Carolina. The views expressed in this piece are their own.