The Assad Regime: The Beginning of the End? 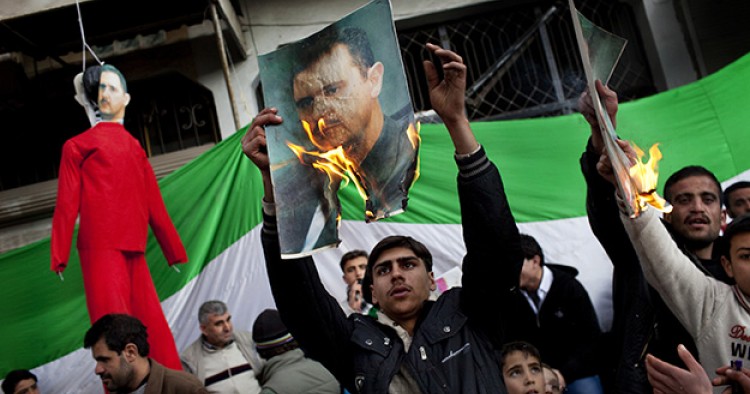 Bashar al-Assad’s regime in Syria did not have a good winter. His forces lost a provincial capital, Idlib, and despite repeated efforts could not even seize northern and eastern suburbs adjoining Damascus. There were also failures in Aleppo and Dara‘a. He had to relieve heads of two of the regime's four secret police services. The economic situation worsened.

These events are not surprising. Despite constant Western media assessments that Assad’s situation is secure, the reality is that the Syrian war is one of attrition, and minority regimes usually do not fare well in prolonged wars of attrition.

The Assad regime still enjoys some military advantages and support from Iran and Russia, which helps to prolong the conflict. Yet some recent developments may in fact be indicators of the beginning of the end.

Inability to defend and to counterattack. Although the armed opposition announced its plan to attack the provincial capital of Idlib weeks in advance, the regime lacked forces to reinforce the city, which it lost on March 28 a week after the battle started. The regime has since tried to assemble forces for a counterattack, but its gains have been minimal. At the other end of the country, near the Jordanian border, the regime lost the regional stronghold of Busra Sham on March 25 and then the important Nasib border crossing on April 2—the last functioning crossing with Jordan. Regime counterattacks in those areas also stalled. In sum, the regime appears broadly on the defensive now, and its hold on western Aleppo appears insecure due to the vulnerability of its supply lines.

Increased dissent within the inner regime. There are four secret police agencies that are the foundation of the regime’s power, and in mid-March the regime publicly announced that the heads of two of them had been fired. The removal of Political Security Director Rustum Ghazaleh and Syrian Military Intelligence Chief Rafiq Shehadeh was unprecedented. There are unconfirmed reports that Ghazaleh and Shehadeh fell out over the regime’s dependence on Iran; there also are unconfirmed reports that in the wake of the argument Ghazaleh had to be hospitalized after he was physically attacked.

Their sacking follows the departure of Hafez Makhlouf, Assad’s first cousin who was the general security chief of the sensitive Damascus bureau and who left the country, reportedly to Russia or Belarus, last autumn. Makhlouf, Ghazaleh, and Shehadeh all were members of the inner circle, and their departure within six months indicates significant internal discord in the regime, which had not been seen during the war’s first three and a half years.

If this was not enough, Assad recently ordered the arrest of Munther al-Assad in the Assad home province of Latakia. Munther was not in the regime’s inner circle, but he is a locally prominent member of the Assad family on many countries’ sanctions list because of his material support to the regime. One unconfirmed report claimed that Munther was in contact with Bashar's uncle Rifaat, who is living in opposition in Paris. This may turn out to be false, but the very top Syrian leadership is a family affair directed by the Assads and Makhloufs, and signs of serious dissension are therefore unusual and important.

Signs of dissent within the regime support base. After tens of thousands of casualties, there are hints that the relatively small Alawi community is tiring of the battle and wants out. The regime’s conscription drives in Latakia and Damascus have not met with public support.  Instead, there are stories of families trying to get their sons out of Syria. (In contrast, the Iraqi Shi‘a responded robustly to Ayatollah Sistani’s call for them to mobilize to fight the Islamic State in Iraq.) Moreover, the Shout of the Nation (Sarkhat al-Watan) movement among the Alawi community has survived despite regime efforts to root it out after it was established in the wake of heavy regime casualties with the loss of Tabqa airbase in the summer of 2013. Meanwhile, the regime has attempted to mobilize Syrian Druze communities, but so far they appear more inclined to maintain neutrality despite the proximity of Islamic State elements.

Greater willingness to talk peace. The regime flatly refused to discuss political issues at the Geneva 2 conference in January-February 2014. By contrast, it sent a delegation to Moscow to discuss a political track in January and March 2015. The regime is more comfortable negotiating with tamer opposition elements in Moscow than with the National Coalition of Syrian Revolutionary and Opposition Forces in Geneva, but its willingness to accept any political talks is new. Moreover, its tone was more positive at the conclusion of a second round of talks in Moscow, where its delegation head said that the government and opposition representatives had reached "common ground on a number of important issues." (Some opposition representatives later renounced their agreement to this “common ground” when the government refused to offer any confidence-building measures.) This is not to suggest that Assad is ready to quit, but rather that he is less able to stiff the Russians or even ruin hopes among some of his support base that the civil war nightmare can end.

In the peculiar circumstances of the Syrian regime, the above are all signs of weakness, and its leaders know it. We may be seeing signs of the beginning of their end.