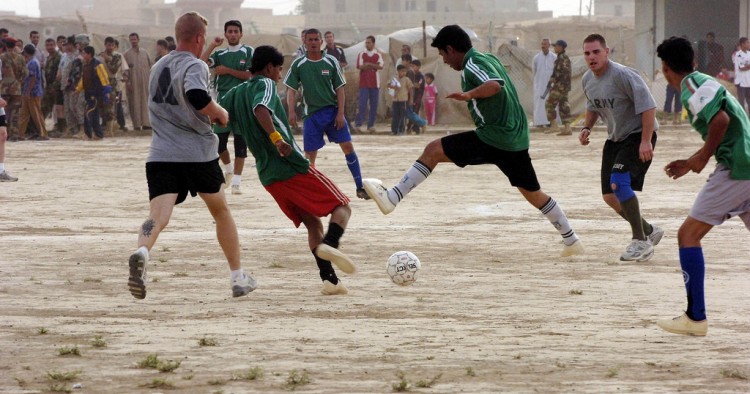 It is the last Sunday in May 2009, and people in Södertälje - a small industrial town, half an hour’s drive southwest of the Swedish capital Stockholm - are enjoying the first hot day of the summer. It is also the day of the biggest football match of the year. Later in the afternoon, Södertälje’s two second division rivals, Assyriska FF and Syrianska FC, will clash. In the hours before kick-off, one sees flags and matching shirts everywhere, either in the white and red colors of Assyriska or in the red and yellow representing Syrianska.

Emotionally tense local derby games are common in Sweden. Yet, the one in Södertälje is special, because in a sense, it is actually a Middle Eastern event taking place in Sweden. For instance, the language most commonly spoken during the fans’ last preparations of chanting, boozing, and burning tires in one of Södertälje’s industrial estates is not Swedish, but Suryoyo, a Semitic language supposedly related both to the old Aramaic that Jesus once spoke and to the language spoken in the ancient Assyrian empire.

Later - at the stadium packed with 8,000 fans from all over Sweden, as well as from Denmark, Germany, and Holland - all of the symbols and chants are in one way or another related to the history of a former homeland in the Levant; Assyriska FF fans with tattoos of the Assyrian god Ashur on their arms; Syrianska supporters exposing Syrian Orthodox crucifixes and Syriac script on their bare upper bodies in the hot afternoon sun; a huge flag rolled down over the main terrace, portraying a medieval Patriarch; a sword symbolizing the genocide of Assyrians in 1915; and an image of the Ishtar Gate in Babel. Why is this happening here, in Södertälje in the early 21st century? How can we make sense of the things these fans say, do, and reflect?

What happens at and around the football stadium in Södertälje cannot be understood outside the historical context of a Christian people, which in their own language call themselves Suryoye. As a consequence of a long history of religious and political persecution,[1] many Suryoye came to leave their homelands in Turkey, Syria, and Iraq in the 1960s and 1970s. A majority of them settled in Sweden, a large number of whom ended up in Södertälje.[ii] Soon, a conflict developed within the diaspora. Some Suryoye were not satisfied with the Swedish label “Assyrier” (Assyrians), used by the Swedish authorities and an influential group of secular leaders within the community alike. For these critics, the name Assyrier was problematic because it referred to a pagan Assyrian empire to which they felt no connection and because it ignored those Suryoye traditions that for the previous 2,000 years had been tied to the Syrian-Orthodox Church. In the mid-1970s, this tension developed into the so-called “name conflict” within the community. An Assyrian faction, who, generally, were more secular and liked to depict the time of the Assyrian kingdom in the pre-Christian era as the Suryoyo golden age,[3] were set against the Syriacs, who placed a bigger emphasis on their Syrian-Orthodox identity, and portrayed themselves as related to the Aramaic people.[4] As a result of this conflict, which persists, Suryoye today have parallel institutions in a wide range of fields, including an Assyrian and a Syriac National Association, as well as an Assyrian and a Syriac youth organization. The Syrian-Orthodox Church has two bishops and two separate churches in Södertälje. And, of course, there are the two football teams. 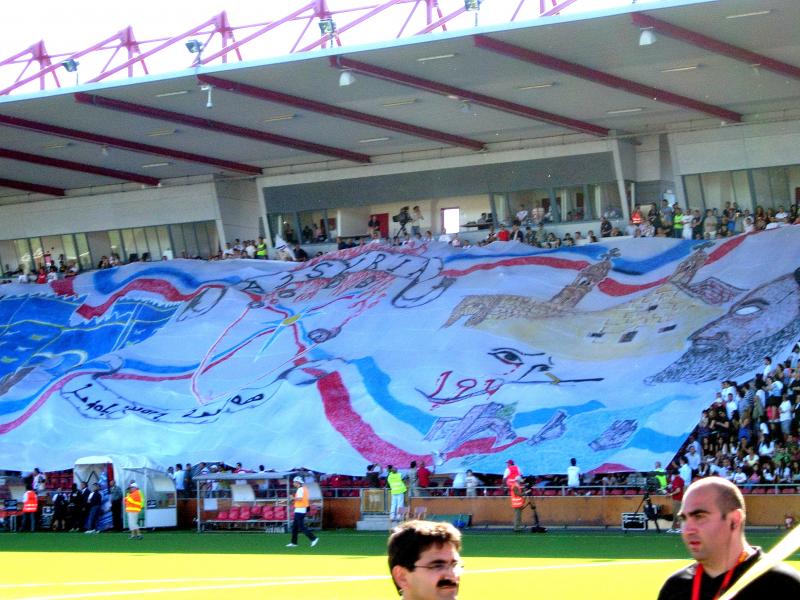 Assyriska FF (AFF), established in 1974, is the oldest and historically most successful of the two clubs. Since then, the team has been long established in the Swedish second division. It has played one Swedish Cup Final (2003), and played one season in the first division (2005). The other team, Syrianska FC (SFC), was established in 1977, and has been mostly one step behind Assyriska in its ascension through the Swedish league system. However, in 2008 SFC was promoted to the second division, where it now plays together with AFF at a shared stadium. Until recently, both teams had been part of the Assyrian and Syriac societies respectively. But for the past few years, they have been run independently of other Suryoye organizations. Both clubs, however, still have boards that are all Suryoye, and an overwhelming majority of their supporters are also from within the diaspora. With respect to players and coaches, the clubs have no rules regarding ethnicity, and both squads of players today are truly multicultural. 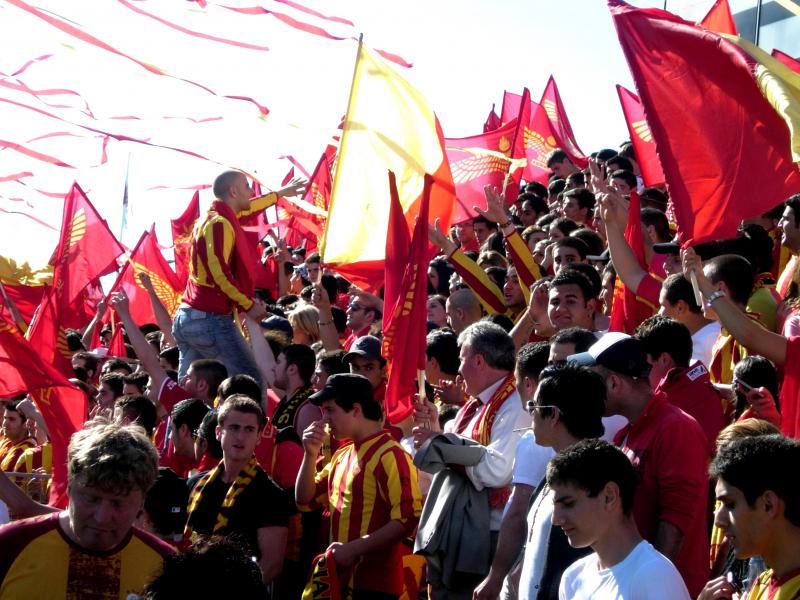 When representatives from the two clubs are asked to explain how two football teams in the rather non-glamorous Swedish second division can make Suryoye families travel for many hours to home and away games, and how it can be that people all around Sweden and even as far away as Australia and California regularly follow the teams’ progress through the internet,[5] they like to refer to FC Barcelona’s slogan més que un club (more than a club). Like FC Barcelona for the Catalans, AFF and SFC represent not only a city or a region (as do ordinary Swedish football clubs), but are in fact clubs of and for a people and hence so much more important. Another phrase that is often used as Assyrians and Syriacs talk about the importance of their clubs is “a national team for a people without a nation.” As scholars such as Benedict Anderson and Eric Hobsbawm have taught us, nations are never primordial, nor in any way essential, but rather “imagined communities” with “invented traditions.” Consequently, national identities are malleable and in a constant state of flux.[6] Arguably, this non-stable nature of all “national” identity positions becomes even more pronounced in diasporic settings, and in particular in a situation such as the one Suryoye live in, where there is no pre-determined national narrative relating to a geographically and politically well-defined nation-state. Instead, Suryoye in Sweden have, in a sense, “started afresh” in their effort to construct a unified narrative about whom they are and where they come from. It is in this context that the name conflict between Syriacs and Assyrians has developed, and it is also here that the competing “national” football clubs have to be located in order to be properly understood.

An important aspect of football as a cultural phenomenon is that it is by definition competitive. Consequently, football in Södertälje facilitates an abundance of settings for articulation of Suryoye’s contested history, i.e. for being Assyrian and not Syriac, Syriac and not Assyrian. The chants, flags, and tattoos shown at the stadium are great examples of how this is played out.[7] Another example are the numerous articles about the clubs that suddenly appeared in the national press in the days ahead of the derby. In these articles, one Assyrian and one Syriac supporter were typically asked to explain the difference between the two groups. If only for a brief period of time at the end of May 2009, football thus managed to make an intra-diasporic debate between opposing perceptions of Suryoye history visible to a nationwide audience. Arguably, this attention from the outside made the tension between the two sides even stronger, and it probably contributed to the perception of the derby game not only as a battle between two football teams, but also as a clash between two ways of understanding who the Suryoye actually are and should be.

Suryoye football is, however, not only important for the construction of Suryoye identities because of the historical symbols and narratives that are explicitly articulated on the terraces and in the press. As Judith Butler convincingly argues, identities are most of all crafted through mundane practices and utterances that people perform repetitively,[8] and football is literally loaded with such repetitive occasions for expressing Syriac or Assyrian identities. The repetitiveness of the games, where people (mostly men) of all ages, from various parts of Sweden simultaneously come together to watch a team that they, as a people, have in common, is perhaps the most obvious example. Yet, it is probably as important to take into consideration how football, quite automatically, names young Suryoye boys as either Syriacs or Assyrians: either you are given a white and red AFF shirt or you dress in yellow and red; either you wave an Assyrian flag symbolizing the two rivers of Mesopotamia, or you fly the Syriac Eagle. What is not possible, however, is to be interested in football and not stand on any side at all; given the importance of football in many young boys’ lives, the chances of ending up in-between are therefore slim. 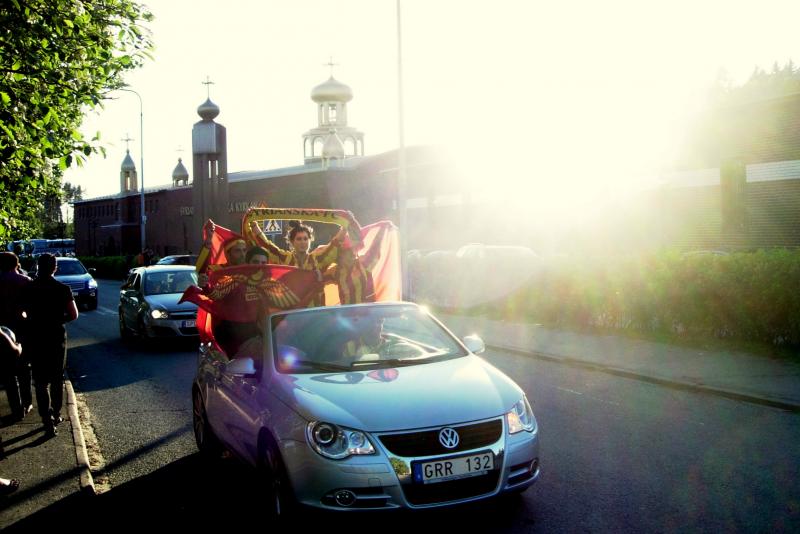 Football in Södertälje in general and the Södertälje derby in particular, is in other words contested terrain both in words and in action. Two versions of a diasporic nationalism - Syriac and Assyrian - are here set against each other, on the pitch as well as on the terraces and in the media writing about the game. The derby game is thus one of many contests in an ongoing struggle about identity, history, and belonging. Yet, in contrast to other aspects of the “name conflict,” a football match, due to its strict regulation, can select a winner and a loser. On this sunny Sunday in May 2009, it was Syrianska FC and its supporters who came out on top (1-0). That day and the night that followed, the Syriac version of Suryoye nationalism thus ruled in Södertälje, and it was the Syriac national team and the Syriac people who got an opportunity to throw a party with a lot of singing, dancing, and drinking for fans and players. The party was held in a large hall owned by the church used by the Syriacs. During the festivities, one of the priests allegedly joined for a period of time, and some people even claim that the bells in the church next door were rung as part of the celebrations. For many Assyrians, this was a cause for outrage, since from their perspective, Suryoye nationalism - and as a consequence, Suryoye football - should be separated from religion. Yet, for many Syriacs, neither the location of the party nor the involvement of the priest was seen as problematic (no one had heard the church bells). Rather, it was considered quite natural to associate the celebrations with the religion, because in their Syriac view of what Suryoye nationalism is and should be, the people and the Church have always been inseparable - as should Suryoye football.

[5]. The most important site for discussions about the clubs and the games are the chat forums on the Swedish platform Svenska Fans. Assyriska FF’s site is to be found on http://www.svenskafans.com/fotboll/assyriska/ Syrianska FC’s on http://www.svenskafans.com/fotboll/syrianska/. For the international attention, see e.g. http://assyriska.theoffside.com/, a blog about Assyriska FF written about an American and one Australian. Articles and match reports were posted regularly up until January of 2010, when the blog was discontinued.

[7]. The various articulations of historical narratives at the stadium are good examples of those “commemorative ceremonies” that Paul Connerton identifies as necessary in the construction of collective social memory in How Societies Remember (Cambridge: Cambridge University Press, 1989).