The Autonomous Territorial Unit of Gagauzia: A new focal point for Russo-Turkish competition? 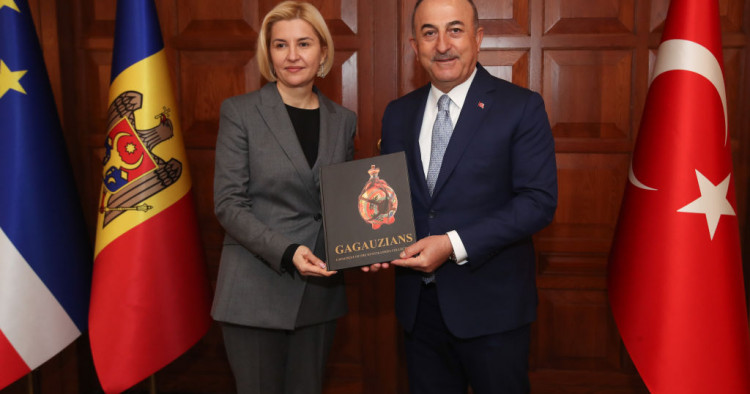 Although many policymakers and commentators in the West tend to see Turkish President Recep Tayyip Erdoğan and Russian President Vladimir Putin as often working together, history shows us that the natural state of affairs between Russia and Turkey is one of competition, confrontation, and even conflict.

Recent geopolitical events remind us of this. The aftermath of the second Karabakh War has brought about a rivalry between Moscow and Ankara in the South Caucasus not seen since the 19th century. Russian and Turkish competition and confrontation can also be found in Syria and in Libya. However, there is another area to keep an eye on that serves as a historical and cultural fault line of Turkish and Russian geopolitical rivalry: the Autonomous Territorial Unit of Gagauzia located in southern Moldova.

Gagauzia is a geographically small region and is home to about 160,000 people. The Gagauz people are ethnically and linguistically Turkic, but religiously Christian Orthodox. In addition to Gagauz, the other main language spoken is Russian. For the most part, anything to do with the Romanian language or Romania itself is viewed with suspicion in Gagauzia. The region is a byproduct of imperial rivalry between the Ottoman and Russian empires typically found in the Black Sea basin in the 19th century. Like Crimea, it was taken by Russia from the Ottoman Empire. In this case, Russia acquired Gagauzia after the Russo-Turkish War (1806-12) as part of the 1812 Treaty of Bucharest.

There is a very strong feeling of independence that runs through the people of Gagauzia. During the messy collapse of the Soviet Union, a referendum was held in March of 1991 which resulted in a large majority of Gagauzians wishing to remain as part of the USSR. Later that year, the so-called “Gagauz Republic” was declared. But unlike neighboring Transnistria, a breakaway region of Moldova home to around 2,000 Russian troops, Gagauzia was peacefully returned to the Republic of Moldova by the middle of the decade.

Today, Gagauzia is the poorest region of Moldova and remains very pro-Russian. Local politicians regularly use separatist and pro-Russian slogans to drum up local support. Events in Ukraine have only encouraged this in recent years.

Russian meddling in Moldova is nothing new. One only has to look at Transnistria. Pro-Russian sympathies also run deep in Gagauzia. During the Moldovan presidential elections last year, Igor Dodon, the pro-Russian Socialist Party’s candidate, gained some of his best results in Gagauzia. While the rest of Moldova is targeted by Russian economic sanctions, both Transnistria and Gagauzia have enjoyed exemptions from Moscow.

It is also worth remembering that back in February 2014, as the crisis in Crimea and Eastern Ukraine was starting to boil over, the regional government in Gagauzia held two referenda. One asked voters to decide their preference between closer relations with the European Union or the Russian-backed Eurasian Customs Union. The vote was not even close: 98.5 percent of the voters supported Moldova’s integration with the Eurasian Customs Union. The second referendum asked about support for a so-called “deferred independence” bill being proposed in Gagauzia’s legislative body. This proposed bill would allow the autonomous region to become automatically independent if Moldova ever lost its national sovereignty (i.e., unify with neighboring Romania). Again, the outcome was a landslide: 98 percent voted in favor of the motion.

Moldovan authorities said that the referenda in Gagauzia were unconstitutional, calling them an attempt to undermine the country’s foreign policy. Unsurprisingly, Moscow backed these referenda. Russian media widely reported the results. Less than 24 hours after the voting ended, the then-Russian Deputy Prime Minister Dmitry Rogozin welcomed the turnout and the outcome.

However, the days of Russia getting such an easy ride in Gagauzia may soon be over because of Turkey. The region has become another place of competition between Moscow and Ankara. Of course, President Erdoğan has been keen to maximize Turkey's influence in parts of the world once under the control of the Ottoman Empire. Therefore, it makes perfect sense that Russia's coziness in Gagauzia, a region firmly in Turkey’s cultural and linguistic backyard, has raised eyebrows in Ankara.

Turkey has taken several initiatives to boost relations, not only with Moldova, but also with Gagauzia. A Free Trade Agreement was signed between Moldova and Turkey in 2016 and it has done a lot to boost economic ties between Turkey and Gagauzia. For example, in the past five years, exports from Gagauzia to Turkey have increased by two-thirds.

In recent years, Turkey has been funding projects in Gagauzia to include new hospitals, schools, and cultural learning centers. In 2018, President Erdoğan visited Gagauzia during a trip to Moldova. In August of 2020, Turkish Foreign Minister Mevlüt Çavuşoğlu visited Gagauzia and opened a new consulate in its capital city, Comrat. Gagauzia became the first country in the world to open a consulate in the region. As recently as February, the Bashkan (governor) of the Autonomous Territorial Unit of Gagauzia, Irina Vlah, visited Ankara and met one-on-one with President Erdoğan. Speaking to journalists on the trip, she said: “Turkey's support for the Gagauz people is priceless. We truly appreciate Turkey’s support.”

There is also an important Ukraine angle to consider.

With recent developments in Eastern Ukraine, and the large-scale Russian troop buildup along the border, Gagauzia’s location in the west is also worth watching. Russia's position vis-à-vis Ukraine would strengthen if it had more influence and control in Gagauzia. It remains to be seen what Russia will do next. The most aggressive scenario could involve Moscow’s attempting to re-establish control of the Novorossiya region of imperial times in Southern Ukraine. This would create a land bridge between Russia and Crimea, eventually linking up with Gagauzia and Russian-occupied Transnistria in Moldova. This scenario would require that Russia take over Mariupol and Odesa, Ukraine’s 10th-largest and third-largest cities, respectively, as well as a large-scale and public mobilization of the Russian armed forces. Such a course of action by Russia would fundamentally change the geopolitical and security landscape in Eastern Europe in a way not seen since World War II.

Even without a Russian attempt to re-create Novorossiya, there is still plenty Moscow can do to undermine Ukraine’s sovereignty and security in the west. Transnistria, with its Russian troops, shares a 250-mile border with Western Ukraine. Therefore, bringing Gagauzia under Russian influence would almost complete Russia’s control of Ukraine’s western border. It would also place Ukraine’s Odessa Oblast under further threat from Russian aggression. This is especially true for the Odessan region of Budjak, which along with Moldova forms the historical region of Bessarabia, once part of the Russian Empire. Complicating Budjak’s situation even more is the fact that the region is only connected to rest of Ukraine by two roads, one of which runs through Moldova.

In the same way those in the Kremlin fantasize about re-creating Novorossiya, there is little doubt that Moscow would like to see the historical region of Bessarabia brought back under Russian control. In 2014, around the same time separatists were making moves in Luhansk and Donetsk, a pro-Russian separatist group called the National Council of Bessarabia made demands of more autonomy from Kyiv. Fearing a repeat of the events in the Donbas, the movement was all but squashed in its infancy after Ukrainian authorities arrested around two dozen people behind it. However, seven years later, it does not take much imagination to see how Russia could stir up problems in the region—especially while the international community is watching the situation in Donbas almost 500 miles away.

Turkey and Russia each take a different approach to its engagement in Gagauzia. Like with the rest of Moldova, Russia focuses more on grassroots politics by funding political parties and candidates. Russia also uses its more recent historical connections to the region to its advantage. On the other hand, Turkey prefers to use soft power in Gagauzia. Ankara places an emphasis on deepening cultural cooperation between Gagauzia and Turkey while expanding economic ties as well. This resonates well with the people living there. One thing is certain: the Russo-Turkish rivalry is not going away, and Gagauzia could become a focal point by both sides.

While tiny Gagauzia might only be 700 square miles in size, it has the potential to play an outsized role in regional politics. Regarding the security of Ukraine, the stability of the Black Sea, and the emerging Russo-Turkish rivalry, Gagauzia is an important piece of the region’s geo-political puzzle. Policymakers should not ignore it.