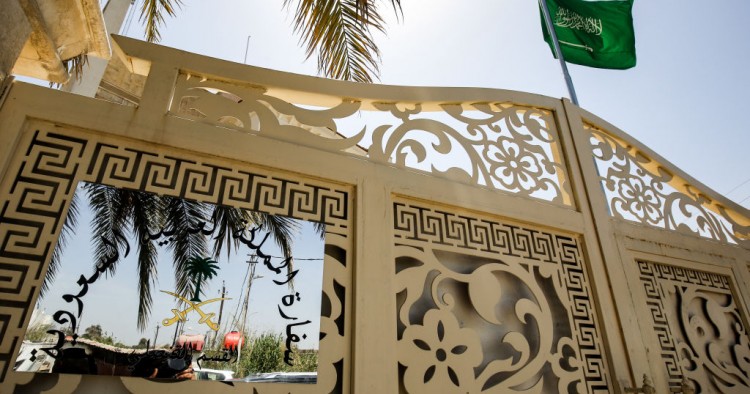 Over the past few months, an awkward courtship has been going on between Iraq and its two most polarizing neighbors, as Tehran and Riyadh attempt to convince Baghdad of the merits of their respective orbits. While both sides make compelling points, the fact is that Iraq is exceedingly happy to occupy the middle ground, geopolitically and economically, between the two regional powers. In fact, doing so may be the best chance for some sense of cohesion to emerge in the country. What’s more, given recent events in the Gulf, Iraq may offer one of the few stable relationships in the region.

Saudi Arabia has been especially forward about its desire to forge closer ties with Iraq. For more than a decade, the kingdom has sought to transform its relationship with its northern neighbor. In their outreach, the Saudis can build on their vocal opposition to the 2003 U.S.-led invasion, and they have plenty to offer as well. Besides a billion dollars in loans and other aid, they have promised to spend nearly $500 million to boost trade between the two countries. Saudi Arabia recently opened a consulate in Baghdad, permitting Iraqis to apply for visas in Iraq rather than visiting Amman, and Riyadh has promised to open three more consulates in the coming months. Iraq has been eager to return the overtures, with Prime Minister Adel Abdul-Mahdi recently visiting Riyadh for discussions with Saudi Crown Prince Mohammad bin Salman.

That is not to say that Iran will be outdone. Tehran has fought hard to maintain close economic ties with Iraq, despite the impact of U.S. sanctions on its economy. A great deal of this has been through mutually beneficial trade agreements; current trade between the two powers is worth nearly $12 billion per year, and Baghdad and Tehran aim to increase that to more than $20 billion. To do this, Iran has focused on building more commercial, rather than official, ties. A new railway linking southern Iran to the Iraqi city of Basra is in the works, while construction on a line to connect Syria’s coastal ports to Baghdad and Tehran will soon be resumed following years of civil war. This comes at a critical time for Iran, as recent moves by the United States regarding both the Islamic Revolutionary Guard Corps (IRGC) and sanctions waivers on purchases of Iranian crude mean that it is crucial for Iran to keep its friends close. Iran dreads the possibility of being hemmed in by opposing powers, and it will leverage its substantial influence in Baghdad to ensure that doesn’t happen. The relationship is far from one-sided though: Iraq seems committed to maintaining ties as well and has sought to increase energy purchases from Iran over the past month.

For Saudi Arabia and Iran, the advantages of forging closer links with Iraq go far beyond any money made from increased trade. First, the upside of denying a key regional rival such a market cannot be understated; a number of Saudis already suspect Iranian meddling via militias in the Iraqi economy. However, the bigger appeal may well be the geopolitical victory to be had. Iraq is another battleground in the broader cold war between the two powers. The question of determining whether Shiism or Arab nationalism is the more important factor in Iraq is one that both Saudi Arabia and Iran are hedging much of their foreign policy upon.

For Iraq, however, it is paramount that it maintain the middle ground. Simply put, it has too much to lose by choosing between the two states. A drift toward Iran would alienate Sunni Arabs, a group which has proven itself willing to resort to violence when it feels that its needs are not heard. Likewise, moving toward Saudi Arabia could incite Iraq’s Shi’as, suspicious of how Saudi Arabia treats its own substantial Shi’a population. The Kurds, it should be mentioned, trust neither side, but feel a greater affinity for the Saudis, in no small part due to Riyadh’s opposition to Ankara’s neo-Ottoman irredentism.

While simply striking out and forming a path independent of the two powers may be tempting, the fact is that, at least for now, Iraq lacks the institutions or the political personalities necessary to make such a move possible. Instead, the country must be held together by the compression of its neighbors. In fact, the Iraqis are tacitly acknowledging just that. Last month Baghdad invited members of the Iranian and Saudi governments to a summit that sought to underline Iraq’s desire to achieve prosperity by working between the two states.

If Iraq is to have a chance at stability, it must find a way to manage relations with both Iran and Saudi Arabia. That might prove the biggest challenge of all, however — especially given the current regional climate. Iran has substantial influence across many strata of Iraqi society; the leader of the IRGC’s Quds Force, Qassem Soleimani, is legendary for his political sway in Baghdad. At the same time though, Baghdad is sorely in need of investment as it seeks to rebuild the country and reduce its economic reliance on Tehran, and Riyadh could play a major role on both fronts. Additionally, and more pragmatically, the Saudis can literally help keep the lights on in Iraq, something that makes everyone happy, particularly as summer approaches.

For Iraq to be successful, it is imperative that it strike a balance between the two sides, although this won’t be easy — and it seems to be getting harder every day as tensions in the Gulf continue to rise.

Kevin Newton is the founder and managing director of Newton Analytical, a firm specializing in consulting on the Middle East and Southeast Asia, particularly in the areas of Islamic law and finance. The views expressed in this article are his own.