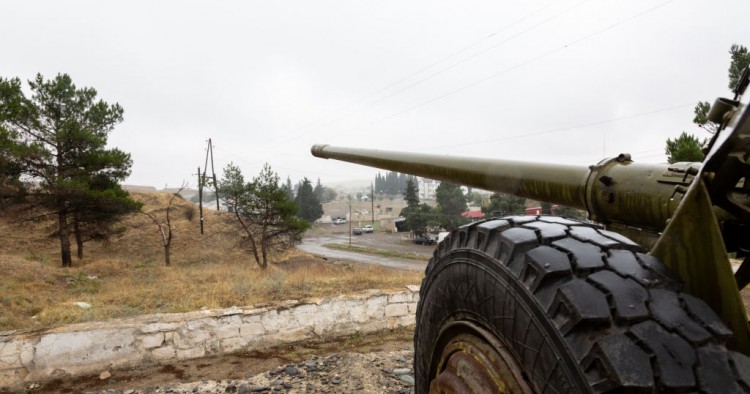 On July 12, military clashes broke out between Armenia and Azerbaijan, quickly escalating into the single deadliest incident since the “four-day war” of April 2016. While violent outbreaks between the two sides are common, they usually occur on the Line of Contact around Nagorno-Karabakh and its surrounding territories. This time, however, fighting erupted along the internationally recognized Armenia-Azerbaijan border, far away from the actual conflict zone. With heavy use of artillery, drones, cyberattacks and disinformation – causing at least 17 combined casualties, including a well-known Azerbaijani army general – the violence risked spiraling into a major war.

Following the outbreak, the two sides blamed each other. Armenian authorities claimed the Azerbaijani side attempted to capture their military outpost but were pushed back, while Azerbaijani authorities declared that Armenian troops started the fighting while trying to seize a strategic position, but were thrown back.

While the catalyst for the fighting is still unknown, it is unclear what Azerbaijan would have gained strategically by initiating a ground offensive in that specific area. Skirmishes and small territorial grabs along the Armenia-Azerbaijan border are nothing new, but they usually serve the purpose of gaining a tactical advantage by seizing new heights in no man’s lands. Azerbaijan has, for the most part, already held the higher ground in the Tovuz area of the border, where the fighting started. Capturing new heights in the relatively high altitude and harsh terrain would be a costly exercise unlikely to lead to any meaningful improvement of its strategic positions.

Meanwhile, Armenian Defence Ministry spokesperson Shushan Stepanyan wrote that in response to the Azerbaijani offensive, Armenian forces might go ahead and capture new advantageous positions. This statement is in line with the Armenian military’s new strategic thinking, which Defence Minister Davit Tonoyan unveiled last year. According to Tonoyan, the Armenian side “will rid of this trench condition, the constant defensive state, and will add the units which may shift the military actions to the territory of the enemy.” In fact, following the flare-up, some experts even claimed that Armenia has already captured the Azerbaijani “Garagaya” (Black Rock) military post, which purportedly would have given Armenia control over a strategically important highway, linking Azerbaijan’s second-largest city Ganja with neighboring Georgia. However, those claims are unsubstantiated.

The area where the clashes broke out is at the center of Azerbaijan’s core infrastructure network, alongside the newly launched Baku-Tbilisi-Kars railway, the Baku-Tbilisi-Ceyhan oil pipeline, and the Southern Gas Corridor. These are all easy targets for attack. The Southern Gas Corridor is designed to carry natural gas from Azerbaijan's Shah Deniz Stage II to the Turkish-Greece border via the Trans-Anatolian Pipeline (TANAP) and then across Greece and Albania via the Trans-Adriatic Pipeline (TAP) to Italy. The pipeline is almost completed, and Azerbaijan expects to deliver the first shipment of gas to Europe before the end of the year. Following the flare-up, Vice President of Azerbaijan’s State Oil Company (SOCAR) Elshad Nassirov accused Armenia of launching a military operation to sabotage the delivery of Azerbaijani gas to Europe. In March and April, Azerbaijan also temporarily replaced Russia as the main supplier of natural gas to Turkey. With new US sanctions against Nord Stream 2 and TurkStream looming, Azerbaijan could further improve its position in Turkey’s gas market. In this situation, it is difficult to understand why Baku would risk the physical security of the Southern Gas Corridor and its reputation as a reliable energy supplier just three months before its launch.

Armenia is a member of the Russian-led Collective Security Treaty Organization (CSTO). Article 4 of the CSTO Charter stipulates that an attack on a member state will be seen as an attack on all member states. In recent years, Russia and Armenia has established a joint air defense system in the South Caucasus and a permanent joint Russian-Armenian ground force by integrating the 4th Corps of the Armenian Army into the Russia’s Southern Military District. This means war is placed under the command of the SMD. In this situation, a direct military offensive on Armenia would inevitably drag Russia into the conflict with potentially catastrophic consequences for Azerbaijan, akin to the 2008 Russian-Georgian war. It is one reason why in recent years Azerbaijan has also sought to differentiate between the actual de jure border with Armenia and the Line of Contact around Nagorno-Karabakh and its adjacent territories, which are internationally recognized parts of Azerbaijan and thus do not fall under the purview of the CSTO. In 2018, Azerbaijan began transferring military posts along the de jure border with Armenia in Gazakh and Agstafa from the Ministry of Defence to the State Border Service. An important part of the rationale for this move was that it would signal a differentiation between the border with Armenia and the Line of Contact on behalf of Azerbaijan, thus limiting the possibility for misinterpretations or provocations. Tovuz, where the fighting broke out, would have eventually followed suit, meaning an attack on Armenia from Tovuz does not align well with Azerbaijan’s long-term military strategy.

Soon after the fighting broke out, Turkey declared its unconditional and unwavering support for Azerbaijan, with President Recep Tayyip Erdoğan stating that “this attack is an event that goes beyond Armenia.” Following a meeting with Azerbaijani military officials, the head of Turkey’s Defense Industries Ismail Demir wrote that Turkey is ready to support Azerbaijan with its combat drones, missiles, and electronic warfare systems. At the same time, footage of military helicopters from the Russian 102nd military base in Armenia patrolling the Armenian-Turkish border began circulating across Armenian social media. Russia denied the border patrolling, insisting it was part of already planned military drills. Russia also announced massive snap military drills involving 150 000 troops from its Southern and Western Military Districts, which according to Russia’s Defense Ministry, will ensure “security in Russia's southwest.” Russia again rejected any links between the military drills and the clashes along the Armenian-Azerbaijani border.

Simultaneously, Russian journalists from the Federal News Agency, a media outlet blacklisted by the U.S. Treasury, cited Kurdish sources in accusing Turkey of recruiting Syrian fighters to send them to Azerbaijan. Major Russian news agencies like TASS soon followed suit, republishing a “report” that was later deleted from its website. Semyon Pegov, a Russian war correspondent and active supporter of the Donbass separatists in Eastern Ukraine, claimed on his Telegram Channel WarGonzo that Hayat Tahrir Al-Sham (HTS) was recruiting fighters in Idlib to send them to Azerbaijan (he has also argued that flight MH17 was shot down by Western intelligence agencies). Pegov was among the few journalists allowed by Armenian authorities into the conflict zone. This kind of disinformation fits well in to a pattern of behavior demonstrated by Russian media outlets during the “four-day war” in April 2016. At that time, Russian media outlets were actively spreading disinformation about ISIS helping Azerbaijan, which was confusing given Azerbaijan is a majority-Shia country. The reports were subsequently extensively debunked.

While it is true that local dynamics have played a major role in the conflict and there has been a consensus of sorts between great powers on containing a new war between Armenia and Azerbaijan, growing complexity and fundamental paradigm shifts in the global system make it increasingly difficult to disengage the conflict from its wider geopolitical context. With great power competition on the rise, many conflict zones around the world risk turning into full-blown proxy wars. The Nagorno-Karabakh conflict is not immune from this. Setting aside traditional actors like Russia, Turkey, the United States, the EU, and Iran, the latest clashes between Armenia and Azerbaijan highlight the emergence of new actors in the region, further complicating the situation.

The latest clashes between Armenia and Azerbaijan highlighted once more the dangerous weakness of the existing status quo around Nagorno-Karabakh. The skirmishes also put an end to the cautious optimism which emerged after the 2018 Velvet Revolution in Armenia. Although many hoped that the Velvet Revolution would reignite a stalled peace process, this unfortunately did not happen. Instead, with each new outbreak of violence, the situation around the conflict is becoming even more complex. This risk is that tensions spiral out of control and evolve into a full-blown regional war, which would be very hard to contain.

Ayaz Rzayev is a fellow with MEI's Frontier Europe Initiative. He is a Baku-based researcher covering issues of regional security in the Black Sea and the South Caucasus. The views expressed here are his own.