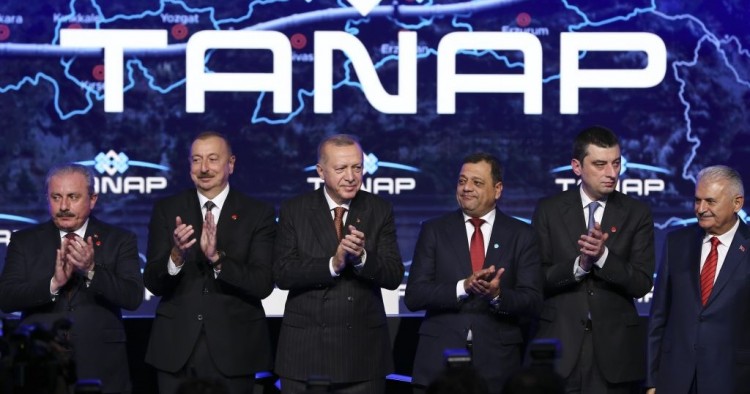 Turkey has completed the next-to-last piece of the 2,000-mile Southern Gas Corridor, a three-pipeline network that will send gas from Azerbaijan’s huge Shah Deniz field via Georgia and Turkey to Western Europe.

It was such a big deal that Turkish President Recep Tayyip Erdogan, Azerbaijani President Ilham Aliyev, and Georgian Prime Minister Giorgi Gakharia presided at the ribbon-cutting on Nov. 30. They were celebrating the completion of the pipeline that is the middle link in the Southern Gas Corridor: the Trans-Anatolian Natural Gas Pipeline (TANAP), which traverses Turkey.

Turkey had already built two-thirds of TANAP, which starts at its eastern border with Georgia. The ceremony marked the opening of the last third of the pipeline between the Turkish cities of Eskisehir, near Ankara, and Edirne, on the border with Greece and Bulgaria. Azerbaijan’s state oil and gas company SOCAR owns 58 percent of TANAP, Turkey’s Botas 30 percent, and BP 12 percent.

The Southern Gas Corridor includes the South Caucasus Pipeline, which runs from Azerbaijan through Georgia to Turkey’s eastern border; TANAP; and the soon-to-be-completed Trans-Adriatic Pipeline (TAP), running from Turkey’s western border to Italy.

The 1,100-mile TANAP is the longest link in the $45 billion Southern Gas Corridor. It began supplying gas to Turkish cities east of Eskisehir in June 2019 as work continued on the last segment. So far it has delivered 4 billion cubic meters of supply.

When TAP is finished next year, the Southern Gas Corridor will supply 6 billion cubic meters of Azeri gas to Turkey and 10 billion cubic meters to Europe. Technicians recently tested the Greece segment of TAP by sending gas through a short section. The plan is to begin delivering limited amounts of gas to Italy this summer, gradually increasing the flow to its design capacity by the year 2022. Italy’s pipeline network connects with a web of pipelines across Western Europe, so Azeri gas could be serving much of the continent soon.

Work on the Southern Gas Corridor began in 2008, and the United States and the European Union have been enthusiastic supporters of the project because it will reduce Europe’s dependence on Russian gas. Russia’s Gazprom remains the largest supplier of gas to the continent, at around 37 percent. The Southern Gas Corridor is the only Europe-bound pipeline that does not originate in Russia.

In addition to bolstering Europe’s energy security, the Southern Gas Corridor will rev up the economies of Azerbaijan, where the pipeline originates, as well as Georgia and other nations that earn transit fees by sending gas on to the continent.

When the Soviet Union disintegrated in the early 1990s, oil-and-gas-rich Azerbaijan faced a dilemma: The pipelines from its energy fields ran through Russia, which meant Moscow could dictate the amount of Azerbaijan’s exports and the transit fees it charged for delivering them. Azerbaijan began looking for export routes that could skirt Russia and deliver its products directly to international markets.

Given its strategic position between the Caucasus, the Middle East, and Europe, Turkey has aspirations of becoming an energy hub. Besides obtaining gas from Azerbaijan, it is also getting it from pipelines from Russia and Iran. TurkStream, a Turkey-bound pipeline set to open in January, will bolster its energy-hub ambitions. The pipeline will originate in Russia and run under the Black Sea to Turkey, where the gas can be used domestically or sent on to other countries.

For Georgia, which has no known major deposits of either oil or gas, the Southern Gas Corridor means both security of supply and monetary rewards in the form of transit fees. For the last two decades, Georgia has proven itself as a reliable transit country by guaranteeing an uninterrupted flow of hydrocarbons westward. Georgia is the only country in the South Caucasus with access to the ocean via the Black Sea, which creates more opportunities for the country to solidify its position as a reliable partner for the transportation of goods and commodities along the westward export route.

In addition to the economic benefits, energy supplies from Azerbaijan have also been strategically important to Georgia, allowing it to eliminate its dependence on Russia, a country with which it has had fractious relations since the early 1990s. Azerbaijan is now Georgia’s major gas supplier, providing it with 2.5 billion cubic meters a year. Following the military invasion in 2008, Russia illegally occupied two Georgian territories, Abkhazia and South Ossetia/Tskhinvali, the administrative border of which is only few hundred feet away from the pipelines running through the country. Despite the strained relationship, trade between the two countries resumed few years back. Georgia continues to obtain a hefty transit fee from sending Russian gas through its pipelines to Armenia. Georgia’s transit fee for sending Azerbaijani gas to Turkey is a barter arrangement: 5 percent of the amount that Turkey imports.

Although the Southern Gas Corridor will supply a fraction of the gas that Europe obtains from Russia, it will have important energy, economic, and geopolitical impacts on the continent.

To start with, its capacity can be expanded from the planned 10 billion cubic meters a year to 36 billion by adding pumping stations.

In addition, the corridor will provide much-needed jobs and transit revenue for southeastern Europe. Countries there are building connections between the corridor and pipelines already serving the continent. This will help wean many areas of Europe away from a single supplier: Russia.

Finally, the corridor’s success is encouraging the partner countries to start building other long-discussed projects — similar to the ongoing Baku-Tbilisi-Kars railway — and thereby helping to bring the continent closer together and making trade more reliable and secure.