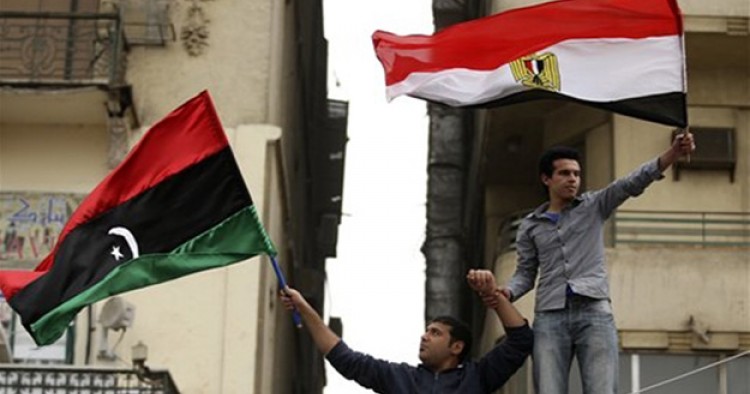 In 2011, many observers predicted that relations between Libya and Egypt would become closer after both countries underwent similar revolutions followed by attempts at democratic transition. But three years later, the realization of this prediction appears unlikely. Political realities and ideological differences have led to a relationship that is contentious at best.

Today, current tensions stem from the inability of Libya’s central government to control events unfolding in the country, particularly in its lawless eastern area. This is in part a result of the government’s lack of control of the militias that roam the country and that have been wreaking havoc since the revolution. Attempts by the General National Congress to reassert central authority have failed. While some militias currently answer to parliament, those in the east remain outside government control.

Egypt has been affected by this instability in a number of ways: Egyptians living in Libya have been subjected to violence; a number of Qaddafi-era figures are operating out of Egypt, thereby evading arrest in Libya; tensions are high in regard to the power of Libya’s Islamist groups; and Egypt has become a thoroughfare for arms trafficking out of Libya.

On February 14, former Libyan military commander Khalifa Hifter declared in a video posted online and carried by several television outlets that the military was taking over, that parliament was suspended, and that there would be a new road map for Libya’s transition. The statement seemed to emulate what Egyptian General Abdul-Fattah el-Sisi had done in Egypt seven months earlier. The statement was not accompanied by any actual troop movements or actions. Prime Minister Ali Zeidan dismissed the declaration as “ridiculous.” Interestingly, Zeidan received a phone call from Sisi, in which the general assured him of Egypt’s support for the Libyan government. The call relieved tensions between the two countries, but only for a short period.

A few weeks later, seven Egyptian Christians were found killed on a beach outside the city of Benghazi in eastern Libya. Shot in the head execution style, the bodies revealed signs of torture. Libya’s inability or apparent indifference to finding the killers sparked outrage at all levels of Egyptian society.

Eastern Libya is home to some of the country’s most extreme militant groups, including those allegedly responsible for the murders of the seven Egyptians. These Egyptians were part of a large community of migrant workers, estimated at over one million people, who work in Libya and send remittances back to Egypt. Egyptian Christians working in Libya have increasingly found themselves accused of proselytizing, in part due to their ability to speak Arabic and communicate with Libyan Muslims. Such accusations have been followed by intense violence. The Apostolic Vicariate of Tripoli believes that the groups that have been attacking Egyptian Christians are simply seeking greater visibility.

Despite the ongoing chaos, Libya is relatively financially stable and has been attempting to use its financial power to speed up the extradition of members of Qaddafi’s regime that fled to Egypt in 2011. Last year, Libya arranged the extradition of Ali Maria, former Libyan ambassador to Egypt, and Mohamed Ibrahim, brother of the former Libyan information minister, both of whom had been living in Cairo. However, several members of the Qaddafi regime remain at large, including Ahmed Qaddaf al-Dam, Qaddafi’s cousin and former special envoy to Egypt. The Libyan Ambassador to the UN Ibrahim al-Dabashi has alleged that remnants of the regime are “working out of Egypt to destabilize Libya.” Egypt has angered Libya by its reluctance to extradite these officials, who claim that they will face torture and will not receive fair trials in their home country.

Perhaps the only issue that the Egyptian and Libyan governments share and hold at an equal level of importance is securing the 720-mile long border that divides the two countries—though they disagree on how to accomplish this task. Militant groups can easily transport weapons and fighters across the porous border from Libya into Egypt, and many weapons are funneled to terrorist organizations in Sinai. Recently, a surface-to-air missile obtained from Libya was used by militants to bring down an Egyptian military helicopter in Sinai, increasing Egypt’s feeling of urgency to increase border security.

While this is clearly a threat to both nations’ security, officials from each country are at odds as to the causes of the insecurity as well as to how to solve the problem. Egypt believes that Libyan militant groups are to blame for the smuggling and violence on the border and is pressing Libya to use a firmer hand with them, while Libyan officials maintain that those responsible for the arms trafficking and violence are elements of Qaddafi’s network fragmented in Egypt. Libya claims that the only way to improve security along the border is to extradite those elements, which the Egyptian government is not eager to do.

But while Egypt may not extradite Libyan officials anytime soon, it is pledging to help Libya gain better control of its security situation in other ways. On March 6, Egyptian Foreign Minister Nabil Fahmy called for the establishment of an international fund tasked with collecting and storing weapons in Libya in coordination with the UN and Libya. The initiative aims to prevent incidents that threaten Libya’s security and lead to the killing of civilians, including Egyptians residing in the country. Fahmy also announced that Cairo will host the International Ministerial Conference on controlling Libyan borders this year, stressing the importance of helping Libya to confront this great challenge.

Another area of potential cooperation between Egypt in Libya lies in investment. Though remittances from workers in Libya are a vital part of the Egyptian economy, Egypt’s economic interests in Libya extend to the pursuit of valuable contract opportunities, particularly in the construction sector and in regard to infrastructure projects. Four cooperation protocols have already been signed between the Libyan and Egyptian Ministries of Housing in the fields of urban planning, training, and real estate financing.

Thus, while Egypt and Libya continue to squabble over extraditions and the power of Islamist groups, the joint task of securing Libya’s borders as well as Egyptian opportunities for investment in Libya may provide the means through which the two countries can come to a less contentious future relationship.