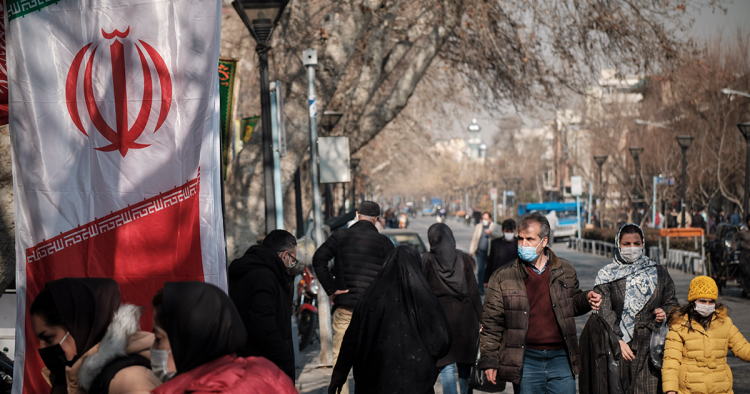 Iran began the new fiscal year on March 21, 2022 having recorded an estimated GDP growth rate of about 4% over the previous year and 3% for the non-oil sector. The consumer price index (CPI) has grown by 35% year-on-year, according to the Statistical Center of Iran (SCI). While GDP growth could be the result of the stabilization of the economy after several years of recession due to harsh sanctions and economic mismanagement, a steady rate of high inflation is alarming for Iran’s economy.

Over the past decade, CPI has increased by 735%, while the economy has grown by only 7.2%, according to data from the SCI. The Central Bank of Iran (CBI)1 puts the figure even lower, at just 5.7%. During the same period, regional peers Saudi Arabia, Iraq, and Turkey grew by 16.2%, 31.9%, and 48.8%, respectively, while their CPI rose by 115%, 114%, and 248%, according to data from the World Bank. Iran’s divergent performance is the result of various sanction regimes imposed by the international community in 2011-15 and by the U.S. since 2018. It is also the result of poor fiscal discipline caused by the dysfunctional nature of Iran’s political economy, which allows for the full interdependence of the CBI and the government.2

Oil revenues have long been the government’s main source of income. At the oil price peak in 2008, oil contributed 30.7% of Iran’s GDP (see Figure 1). After the international community intensified sanctions, the share of oil in Iran’s GDP fell significantly, dropping to just 10.6% in 2015. As Figure 1 illustrates, the general government budget relative to GDP during the period 1997-2020 has tended to move in lockstep with oil’s share of GDP, but fluctuations have typically been of a smaller magnitude.

When oil revenues fell short of the government budget, the government sought alternative sources of revenue. These are poorly developed and hard to find given the size of the tax-exempt public economy, meaning the government has often had to turn to borrowing as a last resort. Options at its disposal include borrowing from the banking system by issuing Islamic bonds, from the National Development Fund of Iran, from the CBI by printing money, and from the sale of government assets through informal channels and the Tehran Stock Exchange. These mechanisms have usually contributed to a substantial increase in the monetary base due to limitations on Iran’s financial and capital markets, which are cut off from the global economy.

Figure 2: Development of total national budget, and general government budget as shares of GDP in Iran, 1980-2021

Although in past years oil revenues exceeded the general government budget, Iran allocated part of the budget to repay previous debt at maturity. But when oil revenues are so low that they cannot cover the matured debt, the amount of borrowing exceeds the previous debt repayment. Only in 1999-2001 under President Mohammad Khatami was the government’s net borrowing negative (see Figure 1), meaning part of the government debt was being paid off without creating new debt. In all other years, governments have been borrowing more than they were repaying. Fiscal discipline was at its worst in real terms in 2006-09 under President Mahmoud Ahmadinejad, despite the peak in oil revenues, and during President Hassan Rouhani’s second term (2017-21), especially since the U.S. reimposed secondary sanctions in 2018.

An excessively large public economy and a growing public debt

Before every fiscal year, the government submits the national budget bill to parliament for legislating. According to the Supreme Audit Court (SAC), however, the total budget of public enterprises — i.e., all publicly owned companies, banks, and institutions — has been much larger than that legislated in recent years (see Figure 2). According to annual reports by SAC, over the past four decades, the total national budget, including both the general government budget and that of public enterprises, has increased from 40% of GDP (per CBI figures) in 1980 to 91% in 2018. According to nominal GDP figures from the SCI,3 the relative size of the national budget reached a peak of 78% in 2011 before the international community ramped up sanctions. Looking at both sources, it is clear that most of Iran’s economy is controlled by the public sector and only a small portion is controlled by the private sector and semi-public enterprises.

Moreover, government borrowing in recent years has led to the accumulation of both government and public debt. According to a report from parliament, the total debt of public enterprises at the end of FY2020-21 stands at IRR 9,100 trillion ($32.7 billion), equivalent to 37% of the budget and 26% of Iran’s GDP that year (per CBI). The accumulated debt of the general government in the same year is equal to IRR 6,900 trillion ($24.8 billion) — 118% of the budget and 24.8% of GDP that year (per CBI). This means that the total accumulated debt of the public economy without semi-public companies stood at 45.6% of GDP in March 2021.

Paying back debt and financing the budget is the single biggest challenge for Iran’s economy. Unfortunately, the Raisi government believes borrowing and issuing new government bonds is a more sustainable way of doing this than having the CBI print money. Persistent accumulation of debt, however, is unsustainable, because it leads to monetization of fiscal policy, whereby old debt is paid off by new debt, rather than tax revenue. According to data from the IMF, in Venezuela the persistent monetization of fiscal policy resulted in massive year-on-year inflation of 130,000% in 2018 and gross public debt that nearly doubled in just three years, rising from 180% of GDP in 2018 to 330% in 2021. As debt shrinks in real terms over the years with high inflation, one could argue that policymakers in Iran are intentionally pursuing monetization and high inflation.

Borrowing has become the major source of financing budget deficits

As explained above, borrowing has drawn on several sources, all of which have increased the monetary base and liquidity. Liquidity relative to GDP (per CBI) has been on the rise. Yet some experts4 close to the government have noted that the ratio of liquidity to GDP (per SCI) was very high during 2015-17 while inflation was very low, and since then the ratio has decreased while inflation has increased. Based on this, they argue that liquidity has no impact on inflation. They have also advocated for the government to depend more on the monetary base whenever needed. This brings them to a conclusion that would hinder efforts in parliament to implement structural reforms to facilitate the CBI’s independence from the government. According to any standard macroeconomics textbook, however, growth of liquidity and the monetary base leads to rising prices while keeping GDP growth and velocity of money constant. During 2015-17, the growth in liquidity fell short of that of GDP (see Figure 3), leading to low CPI growth.5

Furthermore, these same experts argue that high inflation is solely the result of increasing import prices as the exchange rate depreciates or the price of foreign goods increases. On this basis, they are advocating for a fixed exchange rate. Conventional wisdom has it that higher import prices lead to higher inflation, depending on their contribution to aggregate demand and how “upstream” the imported goods are — i.e., the distance from production to consumption. In 2018 the initial price hikes were due to the depreciation of the rial and increasing imported commodity prices. The price hikes now for wheat and wheat products are due to the elimination of the low preferential exchange rate on the remaining imported primary goods. However, one cannot underestimate the impact of growth in money on growth in prices in the years after the exchange rate was relatively stabilized. Moreover, a country cannot implement an autonomous monetary policy with a fixed exchange rate regime when interest rate parity holds. With a fixed exchange rate regime, Iran would have to impose capital controls and isolate its capital and financial markets from the international economy to maintain an autonomous monetary policy. This seems to be the true aim of the experts advocating these policies.

By advocating expansionary monetary policy when the government budget needs it, experts close to the top institutions are trying to consolidate the monetization of fiscal policy, which has not shown positive results in Iran or any other country. The correlation between the government’s net borrowing relative to budget and growth in monetary base, liquidity, and prices has increased substantially in recent years (see Figure 4), which sets off alarm bells about the monetization of fiscal policy in Iran. These experts are either advocating this without having full foresight of the consequences, or they know exactly what they are doing and want to bring about a catastrophe.

To avoid a catastrophe, the Raisi government must first understand the problem before it gets worse. The government should not resort to reducing the general government budget by cutting real wages as these experts have advocated. In the current budget bill, the Raisi government only included a 10% raise for public employees and pensioners — far below inflation. Given the size of the public economy, this will affect the largest part of the employed population, causing widespread discontent and potentially sparking fierce protests. The Raisi government, however, may be prepared to suppress these.

Second, Raisi must also understand that overhauling Iran’s economy will require promoting the private sector and reducing the size of the public economy, which since 1980 has been gradually swallowing the wider economy. A failed privatization drive during the Ahmadinejad administration only empowered the semi-public sector, resulting in weaker development of productivity, technology, and international competitiveness while increasing political rent and corruption. For Iran to become a stronger regional or international power, it first needs to overhaul its economy. To do so, much like the Soviet Union, it must move away from central planning and adopt a more liberal economy with the frequent imposition of appropriate regulations to adjust for negative externalities of the market. This will require major structural reforms in the political system and the economy to attract private and foreign direct investment.

Iranians now feel the pain of sanctions and blame the ruling elite for making poor policy choices that brought them economic misery. Although removing sanctions and barriers to trade is conventional wisdom in the modern economy and a vital goal for Iran, the negotiations in Vienna on which this hinges continue to be hampered by political motives that are not related to the main issue under discussion, Iran’s nuclear program. Indirect negotiations between the U.S. and Iran are at a standstill. This comes as Iran has been able to export more oil to China since the Biden administration informally allowed it, easing the economic pressure on the new government, which has also benefited from higher oil prices. This will not be sustainable, however, if the negotiations fail and the U.S. doubles down on sanctions. With the current surge in oil prices following the Russian invasion of Ukraine, Iran must seize the opportunity to secure a deal on the nuclear issue that can help facilitate the recovery of its economy, and then build on this through step-by-step negotiations to address the remaining issues of concern.

Dr. Mahdi Ghodsi is an economist at the Vienna Institute for International Economic Studies and an Adjunct Professor at Vienna University of Economics and Business. His research focuses on international trade, international trade policy, non-tariff measures, industrial policy, foreign direct investment, global value chains, political economy of sanctions, and the Iranian economy. You can follow him on Twitter. The views expressed in this piece are his own.