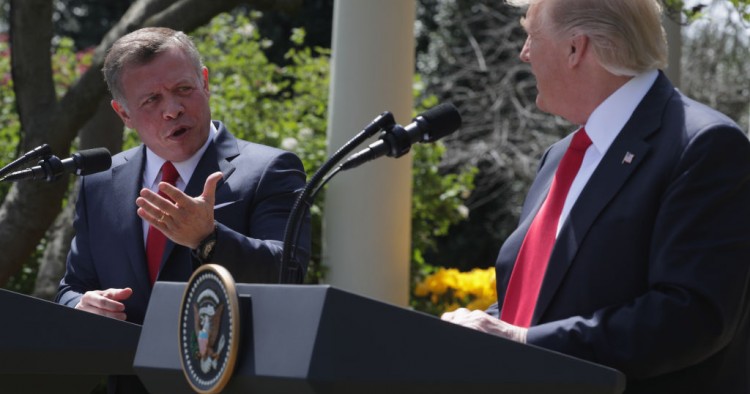 It has become a familiar scene at Jordanian Foreign Minister Ayman al-Safadi’s press conferences over the past year. A reporter asks Amman’s top diplomat whether the Hashemite Kingdom supports President Donald Trump’s Israeli-Palestinian peace initiative; in a careful diplomatic dance, Safadi repeatedly insists that Jordan has no position on the White House plan because it has not seen a copy of the document. This non-committal response has allowed Amman to avoid a crisis with the U.S., its largest financial backer, while at the same time preserving Jordan’s strong support for the Palestinian cause.

Jordan wasn’t able to maintain this stance forever though. On June 11, U.S. officials told AP and Reuters that Jordan would attend the Trump administration’s conference in Bahrain, scheduled for June 25-26, under the pretext of boosting the Palestinian economy. Forced to choose, the Jordanian government seems to have opted to follow Washington’s wishes over those of its overwhelmingly pro-Palestinian domestic audience.

The Muslim Brotherhood, Jordan’s largest opposition group, demanded on May 26 that the government boycott the Bahrain conference, which it described as a “conspiracy against the Palestinian people” that will deny them the Right of Return. “Jordan will be the loser of this deal, which is intended to settle the Palestinian issue at the expense of Jordan,” the Brotherhood added.

The timing of the statement is sensitive as King Abdullah held a rare April meeting with Brotherhood-affiliated lawmakers, signaling his desire to improve ties with the Islamist group. For the Jordanian government to then send official representatives to the Bahrain summit would seemingly reverse all such progress. The Jordanian government is well aware of the Brotherhood’s potential power in mobilizing certain segments of the population.

In addition to the Brotherhood, the wider Jordanian public remains overwhelmingly supportive of an independent Palestinian state. Approximately 60 percent of Jordan’s population is of Palestinian descent, ensuring that the country remains strongly pro-Palestine. Just two weeks ago, Jordanians rallied near the U.S. Embassy to express their solidarity with Palestinians and denounce Kushner’s plan. The Jordanian government’s decision to dismiss the call by the Palestinian leadership for Arab states to boycott the Bahrain conference may come at a price.

The same day that Jordan’s attendance at the upcoming Bahrain conference was reported, King Abdullah met with political and media figures to underscore his “support for the Palestinian people in their pursuit of their just and legitimate rights, noting the kingdom’s coordination with the Palestinian side,” according to the Royal Court. Yet, the king’s lofty rhetoric seems disconnected from reality given that Amman rejected Ramallah’s repeated entreaties to skip the conference.

Echoing a common sentiment among Jordanians, Taghreed Risheq, a reporter for Al-Ghad, tweeted, “Why do Jordanians learn about their country’s participation in the Bahrain conference from foreign sources telling foreign press agencies?” By refusing to first speak directly with the Jordanian public through local media, the government treats its citizens as ‘children,’” Risheq added.

Likely playing into Jordan’s decision is the fact that Saudi Arabia, the UAE, and Qatar will all be attending the summit as well. They have pushed for Jordan to join them to ensure a united Arab effort, so the Gulf states, especially Saudi Arabia, are not perceived to be abandoning the Palestinians. And because of Jordan’s domestic economic challenges, King Abdullah must take their considerations into special account. Following massive protests last summer across Jordan — which toppled then-Prime Minister Hani al-Mulki — Saudi Arabia, the UAE, and Kuwait pledged $2.5 billion over five years to boost Amman’s struggling economy. U.S. support has also been vital, with President Trump increasing aid to the Hashemite Kingdom to approximately $1.5 billion annually. Amid Jordan’s economic woes, antagonizing the country’s key financial backers would be a very risky move.

With Jordan’s fiscal challenges mounting, King Abdullah can ill afford to spurn any external support. Amman’s debt to GDP ratio is at nearly 95 percent, and total debt is approaching $40 billion. Unemployment is at over 18 percent, and Prime Minister Omar al-Razzaz just implemented an unpopular tax hike. Unlike wealthy Gulf states that can shower their publics with social spending, subsidies, or jobs after enacting an unpopular foreign policy, the Jordanian government does not have this option given its severe budget crisis.

Moreover, President Trump has demonstrated his willingness to exact a heavy toll on those who oppose his policies. Despite the grave humanitarian crisis in the West Bank and Gaza Strip, the U.S. ended its assistance to the Palestinians after the Palestinian Authority rejected Trump’s December 2017 decision to relocate the U.S. Embassy from Tel Aviv to Jerusalem, even going so far as to stop funding for treating cancer patients in East Jerusalem. King Abdullah fully understands that the consequences for Amman of a similar cutoff in U.S. aid would be dire.

On May 22, in what was perhaps a sign of the Jordanian government’s plans, the Jordan Times, which generally adopts a pro-monarchy line, penned a surprising editorial that was highlighted by U.S. Special Envoy Jason Greenblatt. “Welcoming the conference in Bahrain, or at least not impeding it, would provide the Palestinians with an opportunity to test the full implications of the initiative,” the editorial noted. “The Palestinian leadership cannot go on saying ‘no’ to everything offered to them before examining the full implications.”

Senior White House Advisor Jared Kushner visited Amman on May 29, likely in a bid to convince Jordan to attend the summit. But King Abdullah insisted during the meeting that any solution to the conflict must include the establishment of an independent Palestinian state on the 1967 lines with East Jerusalem as its capital, even though Kushner made clear earlier in May that the U.S. plan would not include the two-state formula.

Later that evening, after the U.S. delegation left Jordan, Greenblatt celebrated Israeli control over parts of East Jerusalem — a clear slap in the face and rejection of King Abdullah’s message. The Trump administration seems to believe that given the harsh economic challenges facing Amman, it can convince Jordan to attend the Bahrain conference by offering further economic aid, even as it continues to disregard King Abdullah’s concerns. This is not the sign of a true friend.

Aaron Magid is a Jordan and Iraq analyst at Tesla Government. A former Amman-based journalist, his articles have appeared in Foreign Policy, Foreign Affairs, and Al-Monitor. The views he expresses are strictly his own.