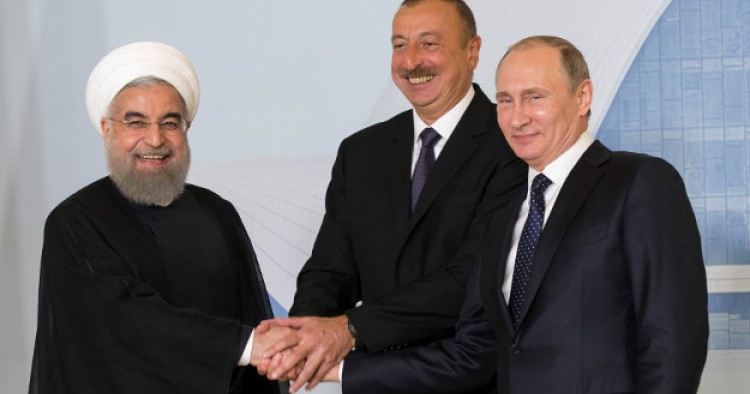 On August 8, the leaders of Azerbaijan, Iran, and Russia gathered for a rare trilateral summit in Azerbaijan’s capital, Baku. On paper, the summit was mostly devoted to regional economic integration projects, particularly the North-South Transport Corridor, a proposed land-and sea-based trade route linking India to Europe via Iran, the South Caucasus, and Russia. But other issues were also on the table, including the conflicts in Iraq and Syria and the threat of Islamist terrorism. The summit concluded with the three states signing a declaration to “comprehensively fight” terrorism and extremism.

Azerbaijan’s inclusion in the summit is striking. Only a few years ago, Baku was unwilling to pursue close economic or security cooperation with either Moscow or Tehran, despite its geographical proximity to both. Azerbaijan saw its 1991 independence from the Soviet Union as a chance to break free from Russia’s traditional high-handedness in dealing with its smaller neighbors, and was uninterested in Tehran’s appeals to Azerbaijan and Iran’s common Shiite faith. But Azerbaijan’s deep disappointment in the Obama administration for having supposedly taken the country for granted, combined with the rising threat of militant Islamism in the broader Caucasus region, has left the nation’s leadership with little choice.

Baku’s motivations for attending the summit are based on both geopolitics and security. In early April, the foreign ministers from the three nations pledged cooperation on a host of issues, but it was the pledge of noninterference in each other’s domestic affairs that stood out.