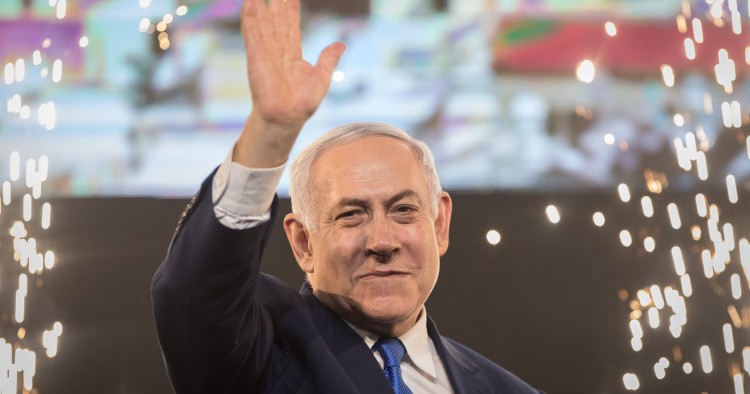 Benjamin Netanyahu — “Bibi” to both friends and enemies — will undoubtedly succeed himself as Israel’s prime minister after his recent electoral success and, in July, surpass David Ben-Gurion as Israel’s longest-serving prime minister. But, unlike most genuinely successful leaders of democracies, his first priority will have to be avoiding indictment for corruption and going to prison (the fate of his immediate predecessor, Ehud Olmert). The attorney-general has already indicated that his indictment within a year is highly probable.

The solution to that problem is technically simple. Bibi’s coalition partners are ready and willing to pass a law preventing indictment of a sitting prime minister but, of course, there will be a price. The ultra-orthodox parties, with 15 seats in the new Knesset, are an essential part of his coalition, and primarily want money for their schools and yeshivas (as well as draft exemptions for their young men). That will probably not be a problem except for another right-wing but secular partner, Avigdor Lieberman, although that can likely be managed. However, the ideological demands for annexation of settlement blocs and perhaps more of the West Bank by his far-right coalition partners from the “Union of Right-Wing Parties” (which includes followers of the assassinated rabbi Meir Kahane) has significant regional and international implications. This is what Netanyahu advocated — for the first time — in a surprise announcement two days before the election, in what was universally seen as a ploy to attract right-wingers to vote for Likud, rather than one of the far-right parties. The ploy may have worked, as two of the most extreme right-wing parties failed to reach the Knesset’s electoral threshold (3.25% of the total vote), but he almost certainly needs the Union for his coalition.

It is widely expected that President Donald Trump’s (i.e., Jared Kushner’s) long-awaited “Deal of the Century” peace plan will be unveiled shortly, perhaps in a matter of days (or weeks, or months). It is perhaps not widely known in the U.S., but this is already fiercely opposed by the Israeli right wing, as it is assumed that it will demand some concessions from Israel. There are concerns that the magnificent gifts Trump has presented Netanyahu in the last year — U.S. recognition of Jerusalem as Israel’s capital and of Israeli sovereignty over the Golan Heights — may turn out to have a price after all; perhaps even the Palestinian state which the Israeli right hoped had been consigned to the dustbin of history.

Netanyahu’s own fervent hope — and his political skills should not be underestimated — is that he can have his cake (Knesset approval of immunity) and eat it too (evasion of any Israeli concessions without antagonizing Trump). It should be kept in mind that the Palestinian Authority has already prospectively rejected anything that comes from this administration, out of anger over its recognition of Jerusalem as Israel’s capital. Thus, Netanyahu and the far right hope that the plan will die a quick death of rejection by both parties, and Israel will be free to proceed with annexation of parts of the West Bank, with the blessing of, or at least with no opposition from, President Trump.

These hopes (they can’t truly be called a plan) contain many moving parts that have to be coordinated. Netanyahu knows very well that concessions to Israel go down well with Trump’s base, especially as the 2020 elections approach, and Trump is already calling the Democrats “anti-Jewish.” While Bibi badly needs to be in Trump’s good graces, he knows that the president cannot afford to antagonize the evangelicals, given that they make up a substantial part of his base.

It is also, paradoxically, true that Netanyahu has never previously showed enthusiasm for annexation. In fact, it has been a continual complaint of the parties to his right that he has limited settlement expansion and blocked annexation. For eight years this could be blamed on the need to appease President Barack Obama. That excuse, however, disappeared two years ago, and while building has increased, annexation only appeared on Netanyahu’s agenda right before the election. Has he always been in favor of it? Is he willing to grab it now that he has a compliant U.S. president and pressure from his coalition? Or is he being dragged into it by his overriding need for the immunity bill, which will likely only be provided in return for a promise of annexation? These are questions unlikely ever to be answered.

Thus, to keep the premiership for a full four-year term and, perhaps, fulfill the dream of “Greater Israel,” while also staying in President Trump’s good graces and avoiding a rupture of Israel’s essential relationship with his unknown potential successor as president of the United States, will require a world-class juggling act on Bibi’s part. This is in addition to the already swelling anger against him and the vision of Israel he represents on the part of the American Jewish community, only 20% of which voted for his friend and supporter, Donald Trump, in 2016.

Shakespeare’s Henry IV ominously murmured “Uneasy lies the head that wears crown” in the eponymous play (Act III, Scene 1). Netanyahu’s rallies are, in fact, already filled with cries of “Bibi, king of Israel.” Threading his way through these minefields, not to mention the anger that will be engendered in so much of the world community, would indeed be a tour de force for a master politician.

Paul Scham is a non-resident fellow at MEI and the executive director of the Gildenhorn Institute for Israel Studies at the University of Maryland. The views he expresses are strictly his own.