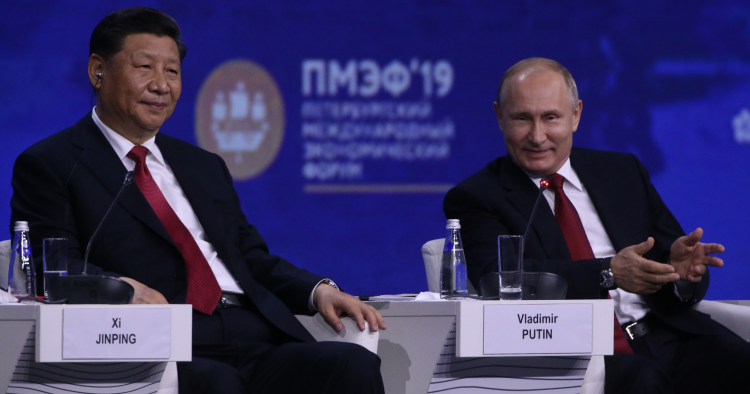 In the 19th century, the Gulf was a British lake. In the 20th century, American warships played an all but unchallenged role securing the safe and unfettered passage of oil to the West. As the 21st century progresses, the transition to a new era is unstoppable. No longer a hegemon, Washington’s options are being reframed in a new contest for access and control in and around the Gulf. This challenge — and opportunity — is front and center not only in Washington, but also in capitals from Beijing to Moscow, from Riyadh to Jerusalem.

Russia and China are well aware that the considerable assets the U.S. still commands in the region remain second to none. But they are also convinced that the “American Century” is ending, creating opportunities in the broader Middle East for Moscow to constrain Washington’s freedom of action and for Beijing to fortify its claim to global leadership.

Russian Foreign Minister Sergey Lavrov is promoting Moscow’s Collective Security Concept for the Persian Gulf. For many years, Lavrov was talking in the wilderness, but today the concept is gaining international currency.

The centerpiece of the proposed diplomatic framework is the establishment of an initiative similar to the Organization for Security and Cooperation in Europe, to increase transparency among adversaries and to provide a forum for multi-lateral talks on regional security after the Iran nuclear deal.

“We propose that the Middle East should cease to be an arena where the interests of leading powers clash,” Lavrov explained at special session of the Valdai Discussion Club on the Middle East in Moscow last month. “It is necessary to balance these interests and to reconcile them among the countries of the Middle East and North Africa, as well as among non-regional partners.”

“All regional protagonist countries, primarily the Arab monarchies and Iran, should gather at one table,” Lavrov continued. “Such organizations as the Arab League, the Organization of Islamic Cooperation, the five permanent members of the U.N. Security Council, and the European Union should also join them. This configuration will make it possible to bring together representatives of all actors significant for the Middle East and North African countries. We should try and launch a process akin to the Helsinki Process and accomplish something similar in the region in the hope that, unlike the pan-European Helsinki Process, we could achieve better results.”

Some 200 years before the Mayflower voyaged to America, a fleet of Chinese ships commanded by the legendary Zheng He projected Ming Chinese power as far as Hormuz and the East African coast.

This year China surpassed the U.S. as the EU’s largest trading partner. By the end of 2020, its naval fleet was slated to surpass that of the U.S. Navy’s — 360 battle force ships compared to 297, according to a recent congressional report. In the Gulf region, the People’s Liberation Army Navy (PLAN) is progressing from anti-piracy patrols under the U.N. flag to an ever-expanding naval base in Djibouti and the creation of a two-ocean blue-water navy at home in the western reaches of the Indian Ocean. On the diplomatic scene, it has posted a permanent envoy to address Syria and recently invited Israel and the Palestine Liberation Organization to resume long-frozen talks in Beijing.

As a consequence, initiatives that were once dismissed as inconsequential must now be taken seriously.

China is supporting the Russian initiative with one of its own. During a recent visit to the region by Foreign Minister Wang Yi, China proposed “a five-point initiative on achieving security and stability in the Middle East.”

“China supports regional countries in ruling out external pressure and disruption, maintaining independence, and seeking a social system and governance model with their own characteristics,” Foreign Ministry Spokesperson Hua Chunying said at a press conference. “Second, we support regional countries in stepping out of the shadow of major power geographical rivalry and take it into their own hands to resolve regional differences and disputes. Third, China is not in the Middle East to pursue selfish gains, engage in geographical jostling, or seek a sphere of influence. Instead, we uphold the spirit of equal and friendly partnership, respect regional countries' independent choices, and hope to contribute to regional peace and development through sincere cooperation.”

The Trump White House offered surprising and ill-considered support for Moscow’s and Beijing’s revisionism. Donald Trump himself suggested that the time had come for others to assume the role played in the Gulf by the U.S. in the post-war era.

In June 2019, Trump tweeted that “China gets 91% of its Oil from the [Bab al-Mandeb] Straight, Japan 62%, & many other countries likewise. So why are we protecting the shipping lanes for other countries (many years) for zero compensation. All of these countries should be protecting their own ships on what has always been a dangerous journey. We don’t even need to be there in that the U.S. has just become (by far) the largest producer of Energy anywhere in the world!”

The Biden administration has inherited an undisciplined mishmash of stillborn regional security ideas aimed at isolating Iran. From Gen. (ret.) Anthony Zinni’s failed effort to cobble together a Middle East Security Alliance to the awkwardly named International Maritime Security Construct — whose most recent member is, of all places, Lithuania — the Trump administration continued the on-again, off-again U.S. effort to stand up an “Arab NATO.”

The failure to establish an effective multilateral security alliance anchored by the U.S. began as long ago as the Tripartite Declaration of 1950 and continued through the Middle East Command, the Middle East Defense Organization, and the Central Treaty Organization. These efforts offered neither domestic security to the Arab leaders who embraced them nor stable political and security dividends to the U.S.

Continuing, if quixotic, U.S. efforts along these lines will no doubt benefit from the uneasy rapprochement between Qatar and other members of the Gulf Cooperation Council mediated by the Trump administration, as well as the Abraham Accords. But it is difficult to see why any American-led achievement in winning Arab expressions of solidarity will result in anything more than a “formalization of weakness,” in the words of one U.S. official involved in a similar effort more than six decades ago.

Joe Biden has yet to articulate his preferred conceptual framework for regional security beyond restoring the Iran nuclear deal, constraining Iranian missile capabilities, and weakening the “axis of resistance.”

None of these objectives are necessarily inconsistent with Chinese and Russian objectives, provided that both the “gain” and the “pain” are shared.

Israel is meant to be a core member of Biden’s team. Indeed, during a recent visit to Israel by Secretary of Defense Lloyd Austin, Israeli Prime Minister Benjamin Netanyahu said that Austin had told him the two nations "are not just allies; we're family."

Perhaps a dysfunctional family. Notwithstanding American support for Israel’s conventional arms and nuclear capabilities, Israel remains intent upon sabotaging Biden’s hopes for a demarche with Iran, and in so doing reducing incentives for Gulf nations to support Washington — the objective at the heart of U.S. aspirations in the Gulf and beyond.

There is a world of difference between retrenchment — the best description of U.S. moves in the region — and retreat. Retreat, however, is as much a state of mind as a reflection of the true balance sheet of assets on the ground. As the Biden administration charts its future in the region, it will be challenged to maintain the distinction between the two.