The end of an era: Trump invites China to police the Gulf 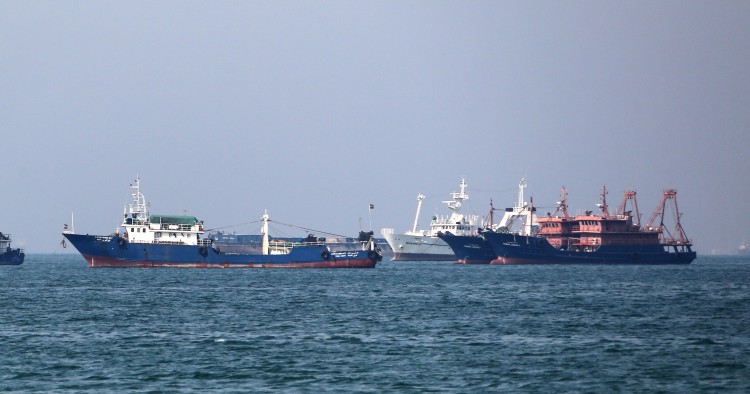 What was President Donald Trump thinking when, on June 24, he announced a historic revision of U.S. security policy in the Gulf?

As Washington slept, Trump tweeted that “China gets 91% of its Oil from the Straight, Japan 62%, & many other countries likewise. So why are we protecting the shipping lanes for other countries (many years) for zero compensation. All of these countries should be protecting their own ships on what has always been a dangerous journey. We don’t even need to be there in that the U.S. has just become (by far) the largest producer of Energy anywhere in the world!”

Since Operation Desert Shield in 1990, Washington’s post-World War II security strategy for the Gulf has been subject to an unending series of challenges. Trump’s blockbuster declaration that the United States “doesn’t even need to be [in the Gulf],” however, poses a fundamental challenge — and for some creates an unexpected opportunity to reduce U.S. power in the region.

According to Trump’s calculus, no country has a greater interest than China in the Gulf’s maritime security. Certainly not the United States, for whom Saudi Arabia is the source of only 11 percent of its imported oil.

China last sent an imposing flotilla to Hormuz in the early 15th century during the glory years of the admiral and explorer Zheng He. Washington now believes that it should assume a role in the Gulf and the security of transit though the Strait of Hormuz commensurate with its 21st century dependence upon the region’s energy, which accounted for just under half of its crude oil imports as of 2018. This simple equation argues for U.S. support for a commanding Chinese role in the region’s affairs — an aspiration that China itself has not declared.

Trump’s enthusiasm for a benign and expanding Chinese role is not shared by his secretary of state, Mike Pompeo. During a recent tour of European capitals aimed at warning Europeans of the perils of accommodating China’s global aspirations, Secretary Pompeo declared, “China wants to be the dominant economic and military power of the world, spreading its authoritarian vision for society and its corrupt practices worldwide.”

Even so, Pompeo supports Trump’s demand that the principal burden of assuring safe transit through the Gulf should not fall on the U.S. Speaking on Fox News on July 22, Pompeo said, “The responsibility in the first instance falls to the United Kingdom to take care of their ships. The U.S. has a responsibility to do its part.”

For the moment, Washington’s retrenchment in the Gulf remains more a state of mind rather than a tangible assessment of its still-commanding ability to deploy resources in the vital region. Even so, efforts to assert authorship of the region’s security architecture have consistently come up short during the Trump era. Gen. Anthony Zinni’s bid to cobble together an “Arab NATO” has fizzled.

As a consequence of the “maximum pressure” campaign against Iran, attention has now shifted to maritime security. Washington’s awkwardly named International Maritime Security Construct (IMSC), according to U.S. Deputy Assistant Secretary of Defense Michael Mulroy, focuses on increasing “surveillance of and security in key waterways in the Middle East.” Only London, which after Tehran’s seizure of the Stena Impero in July announced a plan for a European-led effort to “protect” vessels transiting the Gulf, and Canberra have signed on, and Jerusalem has noted its support.

Washington may have invited China to step up protection of its interests in the Gulf, and China may well welcome Trump’s call as an opportunity to continue its maritime expansion in the region. But Beijing has little interest in responding to an invitation that has not been formally proffered or subordinating its regional security strategy to Washington’s preferences — notably the campaign against Iran — all the more so because of the unprecedented confusion over U.S. policies in today’s Washington.

China has left no doubt that it views Washington’s polices as often reckless and ill intentioned. It is likely that Beijing perceives the IMSC as an expression rather than a repudiation of this view and considers Trump’s invitation to China to join his coalition against Iran as no more than “wishful thinking.”

China’s own patent for expanding its maritime gateway to the Middle East is rooted in President Xi Jinping’s professed “win-win” strategy. China joined the UN-sanctioned anti-piracy campaign to police the waters around the Bab el-Mandeb when it was first established in the Red Sea a decade ago. A rudimentary logistics depot in Djibouti to support this effort has morphed into China’s first, and until now only, permanent overseas naval base, enabling China to project its naval power along Beijing’s “Maritime Silk Road” from the Red Sea and the Horn of Africa to Suez. This military effort supports the commercial success of Chinese port management companies along the sea lanes linking China to the Mediterranean.

There appears to have been no formal follow-up to Trump’s invitation tweet. On July 23, in response to a question about his suggestion, China’s foreign ministry spokesperson noted only that, “the Gulf region is important to international energy supply and global security and stability. We hope all relevant sides can make joint efforts to safeguard the safety of passage in the relevant strait as well as regional peace and stability. The safety of passage of Chinese vessels in the strait should also be guaranteed.”

Soon thereafter Beijing went a step further. “If there happens to be a very unsafe situation, we will consider having our navy escort our commercial vessels,” Ambassador Ni Jian told Reuters in Abu Dhabi on Aug. 6.

A far more enthusiastic endorsement from Beijing followed the announcement of Russia’s plan for collective security in the Persian Gulf — old ideas revived as part of the international competition to fill the gap created by Trump’s interest in a U.S. retreat.

“China champions a vision of common, comprehensive, cooperative, and sustainable security,” noted the foreign ministry spokesperson on July 25. “We believe that in order to achieve universal security in the Gulf, countries in the region should develop good-neighborly and friendly relations on the basis of mutual respect and non-interference in each other's internal affairs. The international community need to form synergy and play a constructive role in promoting regional peace and stability. China welcomes the relevant proposal of Russia and stands ready to step up communication and coordination with relevant parties.”

China’s diplomatic response conceals an active and dynamic interest in expanding its presence in a region vital for its energy security and at the crossroads of international maritime supply and trade routes. Trump is not the sole author of the dramatic changes in U.S. strategic thinking witnessed since the Iranian revolution ended the alliance between Washington and Tehran. But his invitation to China may well be remembered as a turning point in Washington’s retreat from the Gulf.