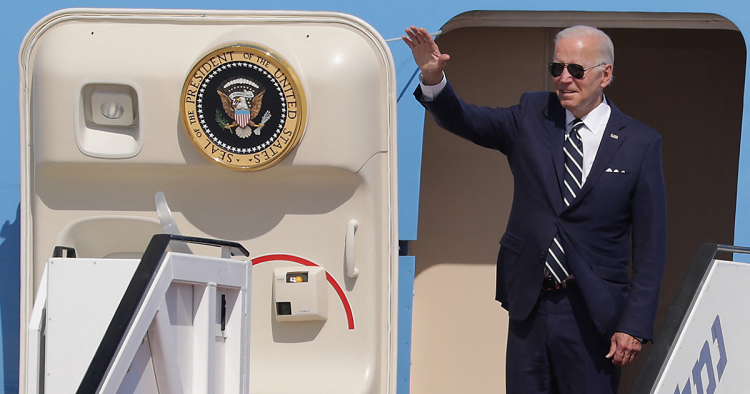 The U.S. and Russian presidents staged high visibility visits to the Middle East in the past week and a half. The visits were designed to assert each great power’s influence in the region at a time of escalating great power conflict. But both presidents cut a diminished figure on the regional stage at a time when leaders in Turkey, Iran, and Saudi Arabia are feeling increasingly empowered.

President Joe Biden made the necessary strategic move for the U.S. by reengaging with important partners in the region at a time of rising energy and food prices, an impasse in the nuclear talks with Iran, and resurgent conflict with Russia and — in the background — China. His team did a good job of laying out areas of necessary cooperation with regional partners on food security, infrastructure, public health, energy production and transition, security cooperation, communication technology (5G and 6G), and regional integration. But while he tried to resoundingly message his presidential mantra: “America is back and here to stay,” his own style — whether it’s his advanced age or the mixed messaging reflected in the handshake vs. fist bump question — as well as the political division and instability in Washington that everyone in the region can see, did not project the sense of a strong, steady, and reliable superpower partner.

President Vladimir Putin, by contrast, seemed even more diminished. Putin, once perceived as the master strategist and tactician, a supposedly mature hand leading Russia’s steady growth, is now seen to have committed the largest strategic miscalculation at least since the U.S. invasion of Iraq. His decision has led to the strengthening of his NATO opponents, an acute isolation of Russia, a sharp contraction of its economy, and a perception by outsiders that his long-term leadership might not be as assured as it was just two years ago when he changed the constitution to enable himself to rule through 2036.

The fact that his main port of call in the entire Middle East is in Iran, an ideologically driven Islamic republic that has a few client militias and zones of influence, but is otherwise at odds, or in proxy conflict, with a majority of states in its neighborhood — and many states around the world — is telling about Putin’s limited influence in the region. In the past five years, the Iranian economy has contracted to less than half its size, offering the Russian leader very little, economically speaking, as he seeks to navigate a costly quagmire in Ukraine. Nevertheless, despite the dire state of the Iranian economy, and Iran’s apparent lack of political strength in the international system, an alliance with Russia's southern neighbor offers Putin several benefits. These include drone technology that could help him in his efforts on the European front and expertise in evading international sanctions, a craft that the Iranians have honed for years.

The optics of President Putin’s “audience” with the Iranian supreme leader, with him seated to the far side of Ayatollah Ali Khamenei, as if to assume a lower status, must have rankled the ego-conscious Putin. Turkish President ﻿Recep Tayyip Erdoğan added to the humiliation by making him wait for almost a minute in front of television cameras — much as Putin had humiliated Erdoğan in a previous setting a few years ago. Any political swagger that Putin may have boasted earlier this year seems to have all but disappeared.

President Erdoğan was in Tehran not to join the Iranian-Russian “alliance,” but to exercise and demonstrate his strategic leverage as a key player between NATO and Russia, and a strategic power in the Black Sea. As a result of his visit to Tehran, he appeared to have pulled off a critical deal with Russia for the export of urgently needed Ukrainian wheat to global markets — a deal that was immediately called into question by Russian strikes on the main Ukrainian port of Odessa.

Indeed, the region’s leaders are feeling their oats, or at least their hydrocarbons and geostrategic positions. Erdoğan is finding that Turkey’s location astride Europe and Asia is a strategic asset at a time when European and European-Asian tensions are mounting. The king and crown prince of Saudi Arabia are finding that despite America’s shale revolution and the beginning of the long energy transition, Putin’s reckless move in Ukraine has given them back tremendous leverage. The Iranians look north and see a superpower in need, that is willing to give the regime a lifeline as pressure from the international community continues to build, and domestic needs become more difficult to meet. Meanwhile, Israel celebrates its regional integration and influence, which it has been able to expand tremendously. Yet it continues to suffer acute political instability and division that makes the American political mess look somewhat tame in comparison.

At the end of the day, despite the lackluster visits of both American and Russian presidents, the U.S. finds itself in a much stronger position in the Middle East than Russia does. The U.S. remains, by some distance, the most influential great power in the region, with political, economic, security, educational, technological, and cultural partnerships with the vast majority of countries throughout the region. It doesn’t hurt that America’s economy is almost 15 times the size of Russia’s. Russia, like Iran, is playing the role of disruptor and opponent to the American primacy. China, in the meantime, is playing the long game, happy to let the U.S. and Russia duke it out, as long as it can continue to buy the region’s oil, sell its products in the region’s markets, quietly build up its Belt and Road infrastructure, and hope that by 2040 or thereabouts — if the communist party can keep the economic growth rates high over the next two decades (a big if) — it will finally eclipse the U.S. both in the region and globally.

President Biden and his team did well to move U.S.-Mideast relations forward along the many policy tracks outlined above. The U.S. still has a great advantage vis-à-vis other great powers in the Middle East and a large number of capable and increasingly integrated partners. It should build on this advantage — which might not last forever — and build out relations and cooperation with partners in ways that strengthen and lengthen this U.S.-Middle East partnership. It should also build on the increasing agency of many of its partners in the region, by encouraging them to increase regional cooperation and integration, reduce regional tensions, and invest in the development and human security of populations in their own region. Domestically, the policy pathways outlined by Biden’s team should largely appeal to both Democrats and Republicans; it would help America’s standing in the region if its Middle East policy maintained a more steady course and did not veer from one extreme to the other after every shift of power between parties in Congress or the White House.

Paul Salem is the president of the Middle East Institute. The views expressed in this piece are his own.