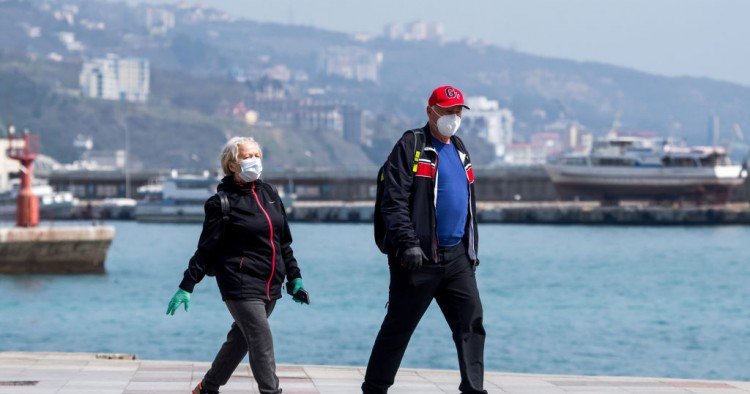 As with the rest of the world, COVID-19 is likely to wreak havoc across the Black Sea region in a very short period of time. With the outbreak projected to peak in April or May – and with some predicting the pandemic will last two years and infect 60 to 70 percent of the global population – it is difficult to fathom the potential consequences for this region.

Prior to the outbreak, the Black Sea region was already managing several military and diplomatic crises. Russia and Ukraine are at war with each other. Turkey and Russia are involved in military interventions in Syria and although the two countries share a long history of cooperation, are at odds over the situation. Russia’s proxy war in Ukraine and annexation of Crimea has escalated diplomatic tensions with NATO members Romania, Bulgaria and Turkey. Meanwhile, Turkey is negotiating with the EU on promised financial aid amidst an ongoing refugee crisis in Europe.

As the COVID-19 crisis engulfs Europe, Romania is among the most vulnerable members of NATO and of the EU. This vulnerability is on two main levels. First, the poor state of the country’s healthcare system. Second, the large Romanian diaspora living in Europe, predominantly in the worst hit countries of Italy and Spain.

Every country is susceptible to having its healthcare system overwhelmed by the coronavirus in a short period of time, but Romania is particularly vulnerable. Bucharest allocates around 5% of GDP to its healthcare system. Compare this to the EU average of 9.8% or to Bulgaria, a country with fewer people and a smaller economy but which allocates 8.2%. It is therefore encouraging to see the Romanian government directing most of its resources to protecting the healthcare system from a sudden influx of patients.

The large Romanian diaspora living in Europe also poses a particular challenge for the government. Italy is home to 1.2 million Romanians – the largest community in Western Europe. There are 580,000 Romanians currently living in Spain. In an unprecedented move, President Klaus Iohannis has asked Romanian’s living abroad not to visit their country for Easter celebrations. They have also been advised to return home only in case of emergency, after which they will likely stay in a period of isolation or quarantine.

It is challenging to gauge the impact of COVID-19 on Romanian society. An economic recession is likely, the extent of which is difficult to estimate. Military spending would need to take a backseat to other economic and social priorities. Similar to the global economic crisis of 2008, a recession could then lead to a political crisis. Even prior to this pandemic, there were calls for an early election. Many believe that while this crisis has led to a momentary political armistice in Romania, the country is far from reaching political consensus.

Another country facing political backlash is Turkey, which at the time of writing has more than 13 000 confirmed cases of COVID-19. Turkey continues to host the largest number of refugees worldwide, with close to 4.1 million including 3.7 million Syrians. The refugee crisis will likely continue to be exacerbated by the pandemic.

As infection rates in Europe continue to rise, President Recep Tayyip Erdoğan’s leadership and ability to handle the crisis will be tested. This comes amid rising tensions with the EU following his decision to open Turkey’s border with Greece and encourage refugees to congregate there. If the president loses grip of the situation or his response is not adequate, the already strong nationalist backlash against refugees could exacerbate. Not least because Turkey’s healthcare system will face increasing strain as it copes with rising infection rates, including within the refugee population.

Rates of infection in Georgia are still relatively low – at the time of writing there are 115 confirmed cases of COVID-19 – and officials have been praised by the WHO for taking quick steps to combat the virus. As a precautionary measure, Tbilisi banned all foreigners from entering the country and suspended flights with high-risk countries. While travel bans have become the standard crisis response for countries around the world, this will have a significant impact on Georgia which relies heavily on tourism to support its economy.

Particularly vulnerable are the Russian-supported breakaway territories of South Ossetia and Abkhazia, where healthcare systems may buckle under a long-term pandemic. Given the unrecognized political status of these territories, access to aid is limited. International partners have provided occupied Abkhazia with medical supplies but the ability of the Georgian government to support the region is hindered by years of heavily restricted access and Russian aggression. Thankfully, this hasn’t prevented the opening of Rukhi General Hospital a few miles from the dividing line with Abkhazia, as well a recent statement by Prime Minister Giorgi Gakharia that Georgia “will do our utmost to protect the health of our citizens on both sides of the dividing line.” The international community should be watching Russia’s involvement in the region as it manages the crisis within its own borders.

Eastern Ukraine faces similar challenges to that of South Ossetia and Abkhazia. It is difficult to estimate the impact of the pandemic on the current conflict in the region. One possible scenario is an intensification of fighting along the contact line in Donbass which divides Ukrainian forces and pro-Russian rebels. With the pandemic yet to peak, both sides could be looking to consolidate or possibly extend their positions before military operations are compromised by infection.

Another scenario could see military operations slow as Kiev, Moscow and the rebel leadership concentrate on mitigating the pandemic’s damage to their own societies. In either case, civilians and military personnel in the conflict area of Eastern Ukraine are some of the most vulnerable groups in the Black Sea region. Moscow should be reminded by the international community of its responsibility for the welfare of those living in Crimea and annexed territories.

COVID-19 will be a defining crisis for the Black Sea in the short and medium term, possibly more so than the political and military crises that have challenged the region in recent years. The region’s resilience will be tested in a way it hasn’t before and the political and economic impact will likely be felt long after the pandemic is over.

George Visan is the Black Sea Security Program Coordinator at the Romanian Energy Centre (ROEC) in Bucharest. The views expressed in this article are his own.

The Growing Alignment Between the Gulf and the Eastern Mediterranean