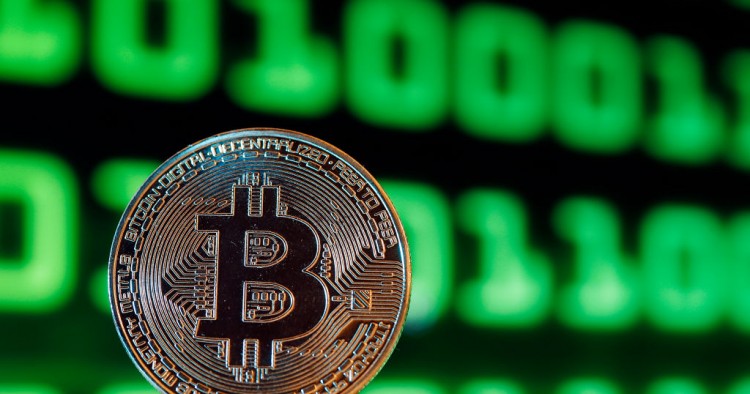 This is an excerpt from a longer study published in Arabic on July 17, 2019 by the Bahrain Center for Strategic, International and Energy Studies (Derasat). The original in Arabic is accessible here. The English version of the complete study can be found here.

The subject of extensive international interest and attention over the past few years, blockchain technology is regarded as a key component of the fourth industrial revolution that has helped change the structure of the global economy while increasing opportunities for development, innovation, and an improved quality of life. This article seeks to shed light on the use of blockchain technology in the Gulf states by analyzing current trends of blockchain adoption in the region compared to those internationally. In so doing, it will determine Gulf institutions’ capacity for keeping pace with the changes and developments blockchain adoption has introduced. It will also touch on the expansion of operational procedures and service provision in various economic and government sectors around the globe.

Interest in the adoption of blockchain technology in the Gulf states began in 2016. It started in the United Arab Emirates (UAE), Bahrain, and Saudi Arabia, especially in the financial and government services sectors. Bahrain focused on studying the legal aspects of blockchain and preparing the requisite regulatory and legal frameworks before starting to use the technology for financial services and digital documents. Meanwhile, the UAE and Saudi Arabia concentrated on researching and examining current and future applications of blockchain systems for government, financial, and commercial services.

Given the nature of blockchain technology, it has a number of impacts and implications for administrative procedures, operations, and systems in various sectors in the Gulf states. The region has recently seen a range of developments in finance, government strategy, project planning, and lawmaking that suggest that blockchain will play an influential role in the development and modernization of the government, commercial, and financial sectors across the Gulf in the coming years.

Most of the current blockchain-based development projects announced by the Gulf states are in the preliminary concept or establishment stage. As is the case in many countries, only a few such projects in the Gulf have entered the experimentation and testing phase due to the newness of the technology and the fundamental changes it promises to bring. Nonetheless, blockchain is expected to spread over the next few years, especially in the UAE, Saudi Arabia, and Bahrain. This dovetails with the findings of UN reports that infrastructure in the Gulf states is prepared for information technology and e-government development.

The Gulf states’ positive rankings on the eGovernment Readiness Index (EGDI) reflect the major ongoing efforts that regional governments have made to improve information and communications technology (ICT) infrastructure across all ministries and agencies in recent years. Bahrain and the UAE led the way within the region among an international group of the most advanced and developed e-governments in the 2018 EGDI rankings.

Additionally, the region’s governmental and commercial infrastructure is dependent on cloud computing and the advanced services provided by the Bahrain-based regional headquarters of Amazon Web Services (AWS) and the existence of international laws such as the Law Providing Cloud Computing Services to Foreign Parties in Bahrain — codified by Decree Law No. (56) for the Year 2018 — to support AWS’s activities in the ICT sector.

The Gulf states have successfully developed an advanced technological infrastructure that is conducive to processing new digital data and has enabled them to keep pace with and take advantage of modern technological developments, increase efficiency and productivity, and improve government services. In 2018, the UAE government launched the Emirates Blockchain Strategy 2021, which seeks to transfer 50 percent of government transactions to the blockchain by 2021. In 2016, Dubai’s government established the Global Blockchain Council, which aims to research current and future blockchain applications and transaction systems. This body has already helped establish several new UAE-based firms specializing in blockchain platform design to develop smart contracts, exchange digital assets, and transfer digital documents.

Saudi Arabia has also signed a partnership agreement with IBM and Elm to discuss strategies for providing government and commercial services via the blockchain (Arrabit, 2018). Separately, Bahrain became the first country in the world to pass a Law for the Issuance of Letters and Electronic Transactions — codified by Decree Law No. (54) for the Year 2018 — to establish the appropriate legal framework and support for using blockchain and other types of modern technologies to conduct transactions in Bahrain’s commercial and government sectors. Since 2018, Bahrain’s Economic Development Board has also been implementing a national blockchain adoption strategy for government services and the private sector.

Meanwhile, some agencies like the Saudi and Bahraini customs bureaus have actively started testing the use of operational blockchain platforms by piloting blockchain-based supply chain management systems at maritime ports. One such program is TradeLens, which was jointly developed by IBM and Maersk and links maritime ports to factories, importers, exporters, and commercial parties (Al Eqtisadiah). Bahrain’s General Directorate of Traffic also unveiled a blockchain-based vehicle registration program.

In the education sector, some Gulf state universities and educational institutions are adopting blockchain to develop mechanisms for issuing, certifying, and verifying academic degrees. The University of Bahrain decided to issue and encrypt digital diplomas using the blockchain and machine learning technologies in 2019 (University of Bahrain, 2019), and the British University in Dubai started to issue degrees via the blockchain in 2018. This helps graduates, educational institutions, and employers more quickly certify and verify degrees by scanning codes on digital diplomas. The information is only accessible via a special link (digital certificate) to the university’s website that displays, certifies, and validates all requested information contained in the blockchain network.

Universities and research institutes like King Abdulaziz City for Science and Technology (Alhayat, 2017) and the Bahrain Institute of Banking and Finance have also developed and introduced blockchain-based pilot projects and training programs.

Another sign that blockchain adoption and usage in the region will continue to expand is the fact that Gulf central banks and monetary authorities understand its importance to the financial sector. This is embodied by the use of blockchain platforms by regional banks, businesses, and financial institutions to more quickly and inexpensively transfer crypto funds and assets to local and regional counterparts.

For example, the Central Bank of Bahrain (CBB) spent a significant amount of time studying the strengths of blockchain cryptoassets before establishing a relevant regulatory framework. The policy ultimately included licensing, oversight, cybersecurity, and governance standards. In early 2019, 28 local and regional firms seeking to offer cryptoasset financial services had joined the CBB-provided “regulatory sandbox framework.” This ensures that the advanced blockchain programs they piloted met organizational needs before their commercial launch. The CBB also collaborated with Bahrain’s eGovernment Authority and The Benefit Company (BENEFIT) on a “Know Your Customer” (KYC) initiative that used blockchain to verify and validate data required to provide consumer banking services.

The Saudi Arabian Monetary Authority (SAMA) has joined the RippleNet allied banking blockchain network to help domestic banks settle payments and transactions with regional banks to make secure monetary transfers faster and cheaper. In keeping with this trend, Al Rajhi Bank made Saudi Arabia’s first-ever blockchain wire transfer from its Riyadh headquarters to one of its branches in Jordan. Meanwhile, the UAE and Saudi central banks have both discussed launching a blockchain-based digital currency for cross-border transactions .

In the UAE, the Abu Dhabi Securities Exchange (ADX) signed a memorandum of understanding with seven central securities depository (CSD) companies charting a path for adopting blockchain and utilizing distributed ledger technology. This could figure in the post-trade landscape for various institutional functions like voting and proxy voting to bolster current standards such as the ISO 2022 character encoding system. The ADX’s agreement will help determine which regulations and standards must be enacted to facilitate the successful adoption of blockchain in the post-trade environment. It will also expedite and further secure financial securities transactions in the UAE and the Gulf.

In 2018, Abu Dhabi’s Al Hilal Bank used blockchain to sell some of its $500 million issue of sharia-compliant bonds, or sukuk. Considered the world’s first-ever blockchain sukuk transfer, this move paved the way for Gulf-based Islamic banking institutions to integrate the blockchain to enhance and facilitate financial transactions. Gulf state communications firms have also revealed that they have incorporated studies on the use of blockchain to make digital payments into their future operational and service development plans.

Table 2 provides an overview of the current status of blockchain projects in the Gulf states announced between 2016 and 2019, broken down by sector. 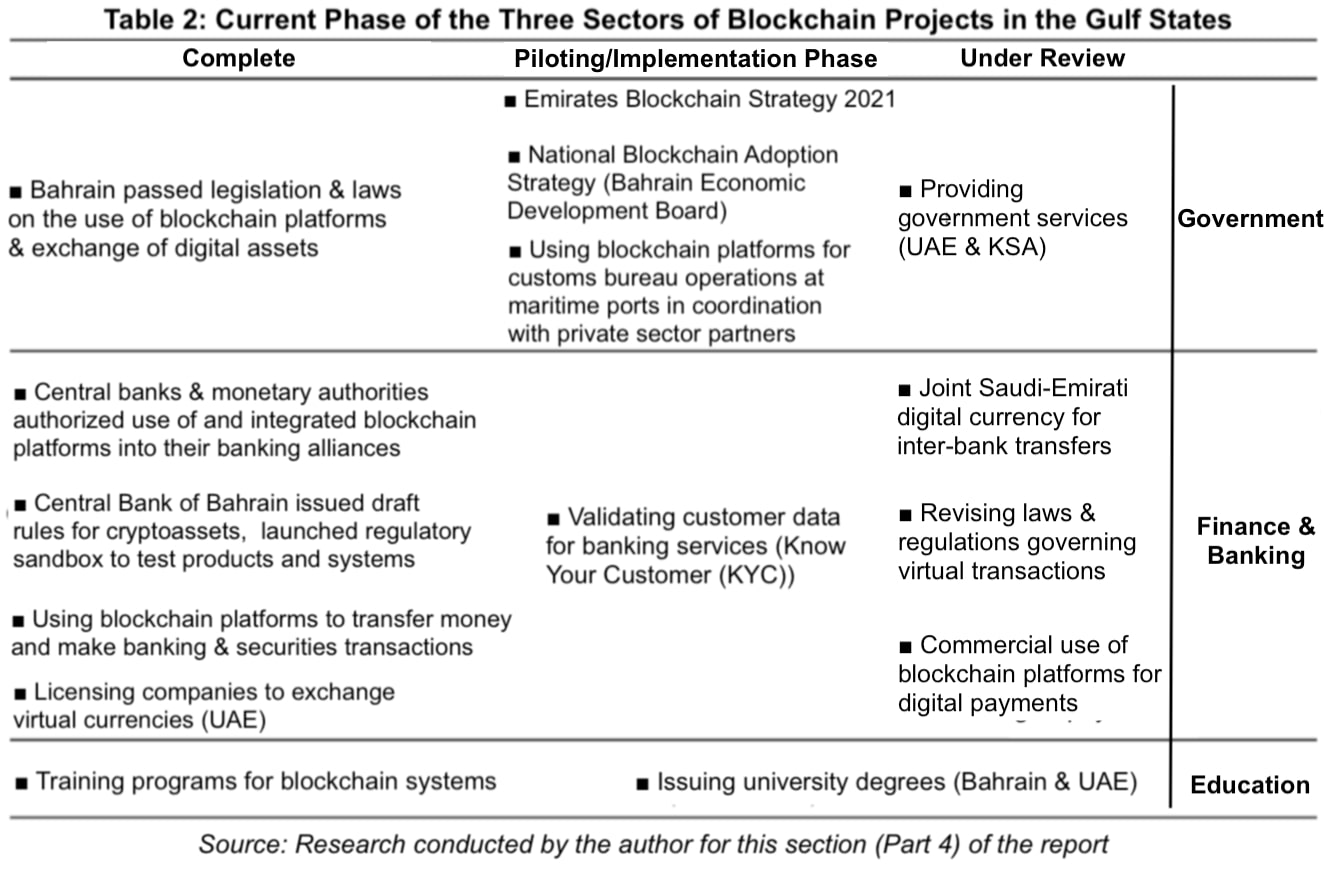 Analysis of the relatively little information available about blockchain adoption in the Gulf states clearly shows that some regional government agencies, central banks, and financial institutions are seeking to use it to enhance their operations and service systems — efforts that can be summarized as follows:

Despite these efforts, blockchain projects are only in their early stages in the Gulf states and, like in many other countries, full adoption of the technology is rare given how new it is. Nonetheless, the current state of blockchain adoption in the region indicates that the Gulf states are entering a new phase of digital transformation. In its new form, managerial thinking and workflow are premised upon blockchain standards — most notably the transparency, decentralization, and disintermediation of the transaction process, as well as the high degree of interconnectivity between economic sectors and actors. Such changes have brought the Gulf states’ public, financial, and private sector institutions to a new threshold of competitive and developmental capabilities, helping them to innovate and modernize services while improving their level of efficiency and productivity.

The Gulf states’ work on current projects has also led local and foreign investors from leading and specialized firms to provide pilot blockchain services and offerings in areas like banking, ports, customs bureaus, and universities. In turn, this has incentivized agencies and organizations to expend greater effort to illustrate the operational benefits and competitive value of embracing the blockchain transformation. It has also encouraged these entities to discuss drafting laws and operational and organizational regulations needed to ensure the secure, meticulous, and appropriate use of blockchain for government, financial, and commercial services.

The prevalence of blockchain technology in other countries vs. the Gulf

The second-most-prevalent type of blockchain project are programs pertaining to the administration and storage of personal records, including financial and medical information; identity programs like the issuance and validation of credentials, licenses, and diplomas; economic development projects; and the expansion of financial services.

The third-most-internationally-prevalent type of blockchain projects include programs pertaining to the storage of land management records; issuance of digital currencies by central banks; benefits administration; compliance; and supply chain management.

The least internationally prevalent type of blockchain projects are being implemented in more than 15 distinct fields including voting and elections; public utilities and transportation; laws and legislation; courts and legal authorities; and taxation and appropriation.

Comparing the above data, we find that the Gulf state governments are keeping pace with global trends for blockchain usage and that the goals of the region’s current blockchain projects — which aim to employ blockchain systems to digitize public services and increase transparency and efficiency — are similar to those of governments elsewhere. 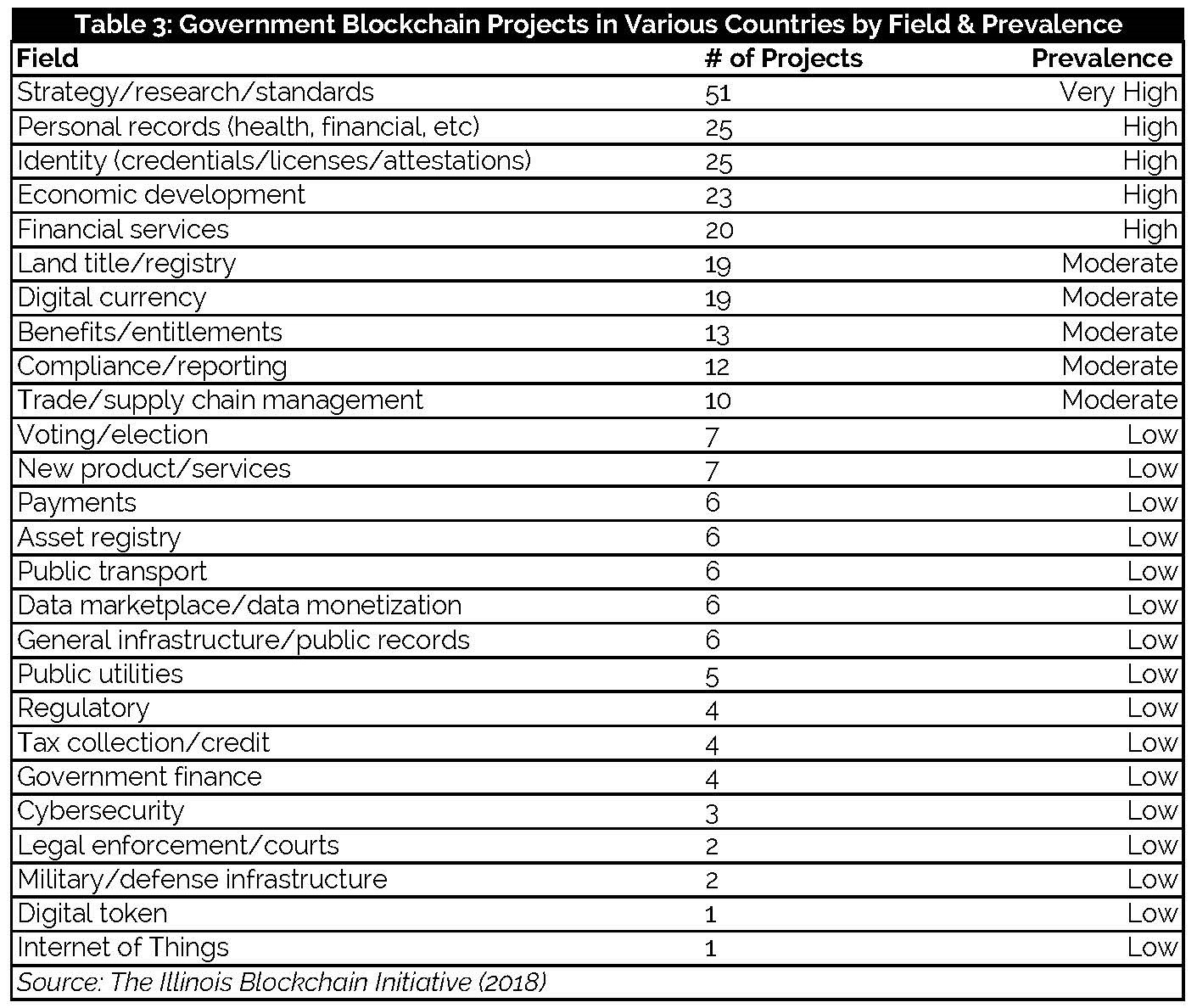 Dr. Fatima AlSubaei is an analyst at the Bahrain Center for Strategic, International and Energy Studies (Derasat). The views expressed in this article are the author’s and do not necessarily reflect those of Derasat or the Middle East Institute.