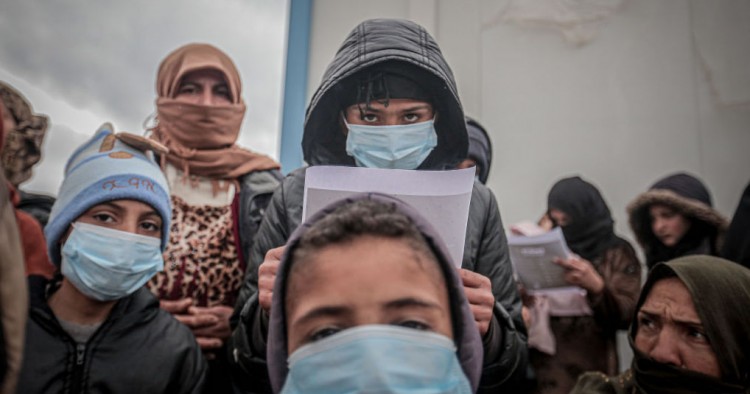 This policy brief is part of MEI’s Strategic Foresight Initiative, which examines key drivers and dynamics at work in the region, thinks strategically, creatively and rigorously about various scenarios, risks and opportunities, and uses methodologically sound approaches to help decision-makers chart a course forward.

Subconsciously we make bets on the future of the Middle East all the time. Given the region’s troubled history, it’s natural to be pessimistic about its future. And the particularly destructive trajectory of the last 10 years suggests a reasonable probability of being right. Four civil wars, the deepened divide between Israel and the Palestinians, elevated tensions between Iran and Saudi Arabia, all engender a sense of futility. Now add the health and economic threats of COVID-19, and the bet that pessimism is the right view looks like a good one.

Our ongoing analysis in MEI’s Strategic Foresight Initiative examines scenarios built around different combinations of drivers of change related to the COVID-19 pandemic.[1] We used the scenarios to analyze what conflict in the region could look like in 2025, as we believe that how these drivers change the dynamics of the Iran-Saudi Arabia rivalry and the civil wars could be a primary determinant of what the region is like in that timeframe and beyond.

Our study posited differences in the health response of governments, the economic response from governments, and the social dynamics of populations to the COVID-19 crisis. Rather than consider them as independent forces of change, our foresight analysis focuses on the interaction between these drivers.

In Brief: The Scenarios and Their Conflict Dynamics

We explored different combinations of drivers to see what impact they could have on the conflict dynamics of the region. In one scenario that we named “Together — for Now,” there was strong cooperation across national governments, regional institutions, and international actors in the health response. But the economic response addressed short-term needs at the expense of long-term economic traction and sustainability. Long-running legitimacy problems persist, but populations bide their time as their governments turn inward to address the crisis.

In terms of Middle East conflicts, this would present opportunities to break the pattern of zero-sum thinking among Iran, the UAE, Turkey, Egypt, and Saudi Arabia. Cooperation between these states on the health front could spill over to other security and economic issues by 2025. With the economies of these major actors struggling to regain steam after a big near-term pandemic stimulus, cooperation could seem an available path back to growth. And a quiescent population would give government leaders the room to maneuver in terms of this cooperation. Today’s civil wars likely would still be ongoing, but we could expect the proxy dynamic in Syria, Yemen, Libya, and Iraq to be less evident.

The “Patients Yes, Patience No” scenario produced almost the exact opposite outcome. Despite cooperation in the health response, populations were angry that governments took the long view in the economic response and seemed to ignore the immediate economic privation imposed by COVID. Even though the policies had led to economic traction by 2025, an uneven distribution of the benefits of that recovery fueled protests and undermined governments.

Here, the major regional powers, while reluctant to jeopardize the nascent traction in their economies, might still feel compelled to deflect attention away from sectarian protests by heaping blame on their neighbors. This zero-sum mentality would not bode well for the crisis helping to bring the civil wars in the region to an end. And any broader cooperative framework would be a bridge too far if COVID response backlash compounded other longstanding protests to deepen the challenges to governments’ legitimacy.

In our “Good Enough Isn’t” scenario, health aid from outside the region was generous but local governments competed for its benefits. Regional economic responses bet on riding the coattails of a global recovery that didn’t happen. Desperation over these dual failures led to social unrest. The insight from this scenario, particularly when juxtaposed with the previous one, hinges on governments struggling to maintain political support regardless of what approach they take.

Conflicts across the board could be expected to get worse in this scenario. Economic stagnation and growing inequality could easily stimulate increased levels of sectarian tensions that could spread across the entire region as some groups in society do better than others. Weakened governments — especially Iran and Saudi Arabia — might externalize their problems by ramping up their conflicts with one another. Proxy wars in the civil war zones could become more intense and destructive.

The most counterintuitive scenario is “Slow Burn.” Shameful avoidance of cooperation on COVID health matters results in more deaths than in all the wars in the Middle East for the last 70 years combined. Economic pain was met with long-term medicine rather than short-term relief, causing suffering for many. Initially, there is little unrest or backlash against governments. But by 2023, people had reached their breaking point, and the “slow burn” became a roaring fire.

Surprisingly, conflict dynamics in this scenario could improve. If the prospect of a shocking pandemic toll across the entire region lit a spark today among governments, the response could be an acknowledgment that only through cooperation could the worst effects of future crises and conflicts be avoided. Governments could begin slowly building from resource sharing and collaboration to address public health risks at a regional level, to a structural and policy framework for working together on the geopolitical front.

Our scenarios demonstrate that while there may be some room for cautious optimism, under the best of circumstances stability in the region will be tentative and fragile. This does not mean there are not opportunities to mitigate the effects of some of the worst scenarios and encourage the cooperation that is embedded in the most hopeful scenarios. Below we lay out our policy recommendations.

1. Work Toward a “Regional Resilience Architecture”

In order for the Middle East to stabilize in and for a post-COVID era, there needs to be a strengthening of regional institutions. The eye should be toward a broad regional architecture that encompasses a multiplicity of issues and interests. Today this certainly seems a bridge too far. But the opportunity should be taken to build on the baby steps taken thus far in the response to the virus, like the UAE sending medical supplies to Iran at the beginning of the crisis.[2]

Moving deliberately from steps like this as a “one-off” transaction to a structured, enduring system of such steps, would build the resilience of public health infrastructures across the region against future pandemics and other risks — and build trust to undergird cooperation on other issues over time.

In the past, the concept of a “regional cooperation architecture” has centered only on security and other geopolitical concerns. The public health factor in a future regional cooperation framework will be essential — and may always have been. Now that health concerns are front and center for all in the region, they could be the missing link enabling such a framework to be considered in a new way. Framing it in terms of resilience — “the ability to adjust to deformation caused especially by compressive stress” — could help as well.

An analogue may be the European Coal and Steel Community, which at the end of World War II laid the foundation for what became the European Union. It would be foolhardy to suggest that an EU-like structure could emerge in the Middle East. But the notion of using the response to COVID-19 as an opportunity to move in that direction is far from naïve.[3]

In most of our scenarios, unsurprisingly, the relationships between the major regional powers — Iran, Turkey, Saudi Arabia, and Israel — are pivotal. These relationships are a primary hinge determining not only how the region as a whole trends toward stability or conflict, but also the success of the pandemic response. The degree of cooperation or hostility between these powers also drives the civil wars in the region to either more or less intensity.

Right now the United States is doubling down on its effort to squeeze Iran, and seems to have given a very long leash to allies Saudi Arabia and Israel. This runs the risk of stoking, rather than reducing, regional power hostilities, and thereby in a very real way undermining the response to COVID-19. And the scenarios suggest a conflictual or self-interested response to the pandemic would in turn further fuel conflict, in a vicious circle. It is important to maintain U.S. alliances in the region. But there must be a greater willingness in Washington’s and other powers’ foreign policies to “do no harm.” Pressure tactics against Iran with no diplomatic pathway runs a risk of reinforcing bad Iranian (and Saudi and Israeli) behavior, and increasing the risk of bad COVID-19 outcomes.

Acknowledging the interrelationships among the three “driver” dimensions we focus on, and recognizing the second- and third-order effects they have on conflict in the region, is imperative. Leaders must think and work, now, at the nexus of the health response to the virus, its impact on economies, the social dynamics complicated by the pandemic, and the region’s endemic conflicts. For success against the pandemic and regional conflict to “trend” together in a positive, constructive way over the next few years, we see several keys.

One is for efforts by regional and extra-regional actors in the health response dimension to be purposefully designed as enduring improvements in the public health systems and infrastructure of every country in the region. A second is that support from outside the region should be designed to free the countries of the region from wrenching dilemmas in their economic responses. Choosing between easing the impact on populations today at the potential expense of a solid long-term economic recovery is potentially very destructive. Finally, governments in the region, local religious and sectarian leaders, and international actors must recognize the importance of giving one another breathing space. Politicizing the pandemic, or using it as a prop to fuel longstanding unrelated grievances, will only undermine the integrated health, economic, and social policy response the region needs to stave off conflict.

To avoid the worst outcomes for an already fraught region, there is no substitute and frankly no alternative to some form of cooperation among regional actors, and ideally international actors as well. With the Middle East likely to emerge from the COVID-19 crisis more fragile and potentially explosive than before, a cooperative architecture that can build regional resilience is an imperative. Policymakers should look at some of the scenarios outlined above as both a wakeup call and an opportunity to move toward such an architecture.

Steven Kenney is a non-resident scholar at MEI and the founder and principal of Foresight Vector LLC. Ross Harrison is a senior fellow at the Middle East Institute and is on the faculty of the School of Foreign Service at Georgetown University and the political science department at the University of Pittsburgh. The views expressed in this piece are their own.

[1] A longer version of this analysis, “Middle East Conflict and COVID-19 – A View from 2025,” is being released by The Middle East Institute (MEI) simultaneously with this In Brief memo version. It is part of the ongoing and expanding work of MEI’s Strategic Foresight Initiative.

[3] See “Toward A Regional Framework for the Middle East: Takeaways from Other Regions” in Ross Harrison and Paul Salem, From Chaos to Cooperation: Toward Regional Order in the Middle East (MEI Press, Washington, DC): 2017