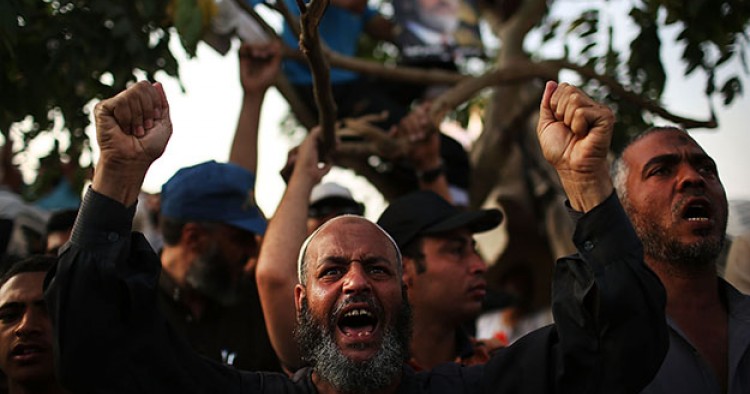 Significant numbers of Egyptians again poured into the streets on July 26 in response to Defense Minister Abdul-Fattah el-Sisi’s call to demonstrate “against terrorism.” While some may argue over the merit of el-Sisi’s call, the deluge of people into the streets reflects a rejection of what they believe is a Brotherhood campaign of political violence waged not just against security forces but against civilians. While Western media seems to ignore the issue, there have been alarming accounts of violence in the vicinity of the pro-Morsi sit-ins, as well as continued attacks in Sinai and throughout Egypt’s governorates that growing evidence is linking to the Brotherhood.

Since calls for early presidential elections began in April, some Muslim Brotherhood supporters have resorted to intimidation and extrajudicial violence against Morsi’s detractors. Throughout the weeks-long sit in at Rabaa al-Adaweya Square both before and after Morsi’s ouster, marches of Brotherhood supporters holding sticks and chanting Islamist slogans have been organized and routinely carried out throughout Cairo’s Nasr City neighborhood.[1] Al-Qa`ida flags have also been present throughout the Brotherhood’s protests before[2] and after[3] Morsi’s removal. On June 28, in anticipation of the June 30 protests called for by Tamarod, Brotherhood supporters can be seen wielding and firing guns on Alexandria’s streets.[4] On a number of occasions, security forces intercepted guns being transported by Brotherhood members and/or supporters across the country. One such interception, dating from July 1, shows several shotguns, at least one rifle, and what appear to be a number of makeshift handguns taken from a van believed to belong to Brotherhood supporters.[5]

After Morsi’s removal, the campaign of violence not only continued, but escalated. In a video, two Morsi supporters at the site of the Rabaa sit-in threatened el-Sisi, specifically mentioning their will to “destroy Egypt by turning into suicide [‘martyrdom’] groups en masse.”[6] Remarkably, the woman in the clip also threatens to “set fire” to Egypt’s Christians. Increased sectarian rhetoric resulted in the lynching of several Egyptian Shi`a during Morsi's tenure, and sectarian attacks since Morsi’s removal have also been on the rise.[7]  Most recently, Copts’ homes were destroyed in Upper Egypt at the hands of Morsi supporters—who called them “infidels” as they did so[8]—and hate speech as well as incitement continues to emerge from the Rabaa sit-in.

Eleven bodies bearing signs of torture were reported to have been found[9]—and independently verified[10]—near Rabaa as well, and testimonies continue to emerge of kidnappings, torture,[11] and killings there. This includes the murder of Ahmed Zileikha, a man drawn to the Rabaa protests after hearing that the Brothers were giving out money and free meals in exchange for attendance at the sit-in and participation in Islamist chants. His friend, who was beaten himself, recounts the story of his friend’s murder at Rabaa from his hospital bed.[12] Another man recounts—also from the hospital—being beaten and having his finger severed by protesters at Rabaa for allegedly stealing a cell phone.[13] Women have also been met with violence at the sit-in; the husband of a woman reportedly kidnapped by two female Brotherhood supporters, accused of being a journalist, beaten, and abandoned on the sidewalk attests to the vicious attack against her.[14] A journalist, Tarek Wajeh, reports his assault and the seizure of his camera in Rabaa, even after he was made to erase all photos he had taken there, and another journalist, Shehab Abdelrazek, was also dragged into a tent and beaten with wooden sticks on his head, back, and legs.[15]  Members of a human rights delegation report being evicted from Rabaa after meeting with hostility and attempted assault from known Muslim Brotherhood activists.[16]  In addition, an Amnesty International report states that “anti-Morsi protesters…were captured, beaten, subjected to electric shocks or stabbed by individuals loyal to the former President.”  Karam Hassan, a 48–year-old resident of Giza, was abducted by Brotherhood supporters on July 2; his

body was discovered by his mother in Zenhom Morgue on 10 July. It was covered in bruises and had burn marks on the chest, back, arms and both legs. He had also been stabbed in the chest and had a fractured skull. Ahmed El Kelhy, Karam’s neighbour, who was with him when he was abducted, said that armed Muslim Brotherhood supporters were shooting live rounds at the residents. He pointed at two bullet holes in buildings and a bullet-ridden pick-up truck.[17]

From within Rabaa Islamist cleric Safwat Hegazi has threatened Egyptians and challenged el-Sisi to clear the sit-in, adding that such a move would be done “on our dead bodies” and that “we are ready to be martyred in the thousands.”[18]

While the Brotherhood leadership tries to officially distance itself from these and other incriminating videos and reports, claiming that those who carry out such actions are not “card-carrying members,” a video of guns stored at what appears to be the regional headquarters of the political arm of the Brotherhood, the Freedom and Justice Party, in the Upper Egyptian province of Beni Suef has emerged.[19]

July 26 witnessed the killing of at least ten anti-Morsi protesters, as well as the torture and interrogation of anti-Morsi protesters inside a mosque in Alexandria.[20] In the video, they are accused of being “infidels” and questioned over whether they are “Christian.” Later that night in Cairo, reports emerged that security forces attacked Brotherhood protesters outside the Rabaa sit-in. This violence left up to eighty dead. Footage of the security forces’ intervention, provided by the Ministry of Interior, appears to show Brotherhood supporters wielding guns and hurling fire bombs in retaliation.[21] While Egyptian security forces are bound by international standards regarding conduct toward protesters, it is important to acknowledge that a significant number of the pro-Morsi supporters are not peaceful and unarmed, presenting the security forces with a predicament as to how to deal with incitement to violence as well as security breaches.

More importantly, the violence leaves Egyptians caught in a battle between two major authoritarian political players, the military and the Islamists, with insufficient protection and little understanding from the Western world.

Further proof of the Muslim Brotherhood threat lies in a July 29 announcement from the main stage of another pro-Morsi sit-in at Nahda Square, which declared that “elements of al-Qa`ida and the Salafi Jihadists had joined [the Brotherhood’s] protest.”[22] In a rather disturbing display of militancy, children as young as four years marched in the Rabaa sit-in carrying funeral shrouds[23] and bearing signs declaring their willingness to seek “martyrdom.”[24] When asked why they were doing so, they indicated that they were given the signs by the adults at Rabaa and told to carry and march with them.

Addressing the continued violence in Sinai targeting Egyptian military and security forces, which has left dozens of soldiers dead, Brotherhood leader Mohamed el-Beltagy stated in an interview that the attacks “would immediately stop if Sisi returns power to Morsi,”[25] implicitly admitting to the Brotherhood’s controlling influence over and possible involvement in these events.

The incidents detailed above, which document but a sliver of the events on the ground, give rise to fears that they are not exceptional but emblematic of an ideology. Until the Brotherhood unequivocally distances itself from violence and incitement, arguments for its integration, especially from the West, ring hollow for many Egyptians, who experience a reality on the ground that is quite different from what the Western media portrays.