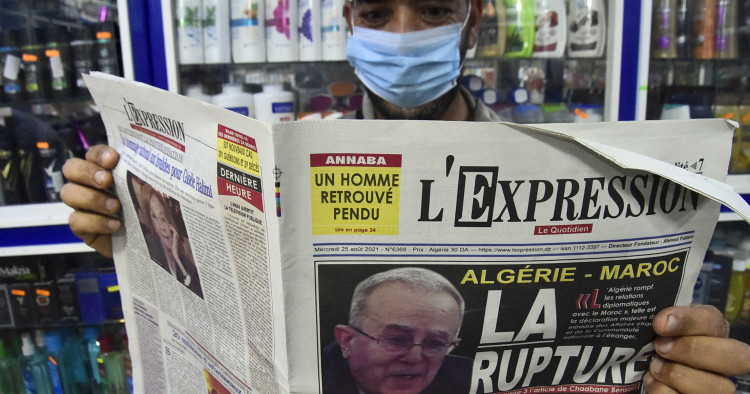 In late August 2021, Algerian Minister of Foreign Affairs, Ramtane Lamamra, shocked the world by abruptly severing diplomatic relations with Rabat after three decades of a cold modus vivendi between the two Maghrebi powerhouses. In an official statement, Lamamra accused Morocco of abandoning its commitment to organize a referendum for self-determination in Western Sahara, among other “hostile and despicable acts” against Algeria.

The dispute over Western Sahara remains one of the world’s most intractable conflicts. Morocco claims the territory as its own, while Algeria is the main backer of the pro-independence, Tindouf-based Polisario Front. The U.N. has tried to broker a solution, including through attempts to organize a referendum, which proved impracticable due to the difficulty of determining who would be eligible to vote. In November 2001, Algeria and the Polisario proposed “the division of the Territory as a political solution to the dispute over Western Sahara” (S/2002/178, para.2), which Morocco rejected out of hand. The Polisario Front, seen by Rabat as a proxy player in a protracted, zero-sum geopolitical game, benefits from “a de facto devolution by Algeria of its jurisdictional powers” to run Tindouf camps in Algerian territory (S/2018/889, para. 67). Nearly five decades on, the dispute has not yet come to a definitive and consensual resolution, as demanded by the U.N. Security Council on multiple occasions. Up to this day, the Western Sahara conflict forms the crux of Algerian-Moroccan antagonism.

In 2007, Morocco proposed an autonomy plan for Western Sahara, presented as a pragmatic “win-win” solution for all parties. From the perspective of international jurists, territorial autonomy based on power-sharing responds effectively to self-determination conflicts by striking a balance between the territorial integrity of states and the right to self-determination. Morocco’s proposal provides for the establishment of executive, legislative, and judicial institutions with exclusive powers, enabling the population of Western Sahara to “democratically manage their local affairs.” In paragraph 8 of the proposal, Morocco pledges to submit “the autonomy statute to the populations concerned for a referendum, in keeping with the principle of self-determination and with the provisions of the U.N. Charter.”

For Lamamra, Morocco imposes “its dictates on the international community regarding the autonomy thesis.” Morocco’s autonomy proposal, however, has recently started to gain traction within the international community. The U.S. recognized Morocco’s sovereignty over Western Sahara in 2020, and described the proposal as “credible, realistic, and the only basis for a just and lasting solution to the dispute over the Western Sahara territory.” This major diplomatic achievement for Morocco came through a U.S.-brokered trilateral agreement by which Rabat also established formal diplomatic relations with Israel. In response, Algerian officials denounced the formation of “a Moroccan-Zionist military axis directed against Algeria.” In March 2022, Spain endorsed Morocco's autonomy plan for Western Sahara, following the lead of Germany and France. Unsurprisingly, this triggered a diplomatic crisis, with Algiers recalling its ambassador and condemning Madrid's “abrupt U-turn" in a statement. On June 8, Algeria went a step further, suspending a friendship treaty with Spain and banning imports from the country.

The postcolonial history of both Morocco and Algeria helps to explain their rivalry. The failure to resolve thorny border disputes in the wake of the War of Sands in 1963 still shapes each country’s attitudes toward the other. Since then, the rivalry has only intensified, and the Western Sahara conflict has become a common trope in Algerian diplomacy.

Morocco and Algeria’s long-standing antagonism is saturated with historical grievances, often dredged up to justify anachronistic behaviors. Algeria finds itself increasingly isolated on the diplomatic front because it clings to what Rabat and other capitals see as obsolete attitudes toward the Western Sahara conflict. Meanwhile, Algeria’s ruling elite inflates the nation’s discursive bubble with patriotic hot air to stifle dissenting voices. This ideological environment perpetuates an unjustified reluctance toward the kind of robust regional cooperation that could greatly benefit Algerians.

It would be highly optimistic to predict a change in Algiers’ position any time soon, as the government remains unresponsive to Morocco’s calls for an “open and frank dialogue” to rebuild trust. With their differing historical trajectories and political systems, bringing these two rivals to terms will be difficult, but not impossible. Algiers and Rabat must set aside their aggressive political rhetoric, which only paralyzes efforts to unify the Maghreb. Pragmatism is key to tamping down tensions. This means compromise and cooperation in place of foreign policy doctrines that breed division.

The Maghreb: An untapped opportunity for the Western Mediterranean

The start of the Arab Spring in 2011 renewed pan-Maghrebi hopes of fulfilling a common destiny. "I hope that 2012 will be the year of the AMU [Arab Maghreb Union], the year when we can resurrect the great North African dream," heralded Tunisian President Moncef Marzouki during a tour that led him to Rabat, Nouakchott, and Algiers. In Nouakchott, Marzouki extolled the virtues of a "Maghreb of freedoms," where the nationals of the five countries would have the right to move, settle, and invest freely across borders. Marzouki’s efforts, however, suffered a major setback when Algeria refused his mediation on Western Sahara. "Unfortunately, all parties had accepted this proposal at the time, except for the Algerian side, which expressed its refusal," Marzouki lamented.

In Lamamra’s denunciation of Morocco, he decried Rabat’s role in “gradually pushing the Arab Maghreb Union toward a slow death.” Setting aside the question of culpability for the current state of affairs, the fact remains that among the eight regional economic communities in Africa, the AMU is the least integrated. While their commonalities outweigh their differences, the AMU countries have so far been unable to overcome traditional rivalries. The Union has not even held a high-level meeting since 2008. More than three decades after the AMU’s creation, the dream of a flourishing Union is still hampered by regional deadlock.

Were it not for their current quarrels, Algeria and Morocco could join forces to spearhead Maghrebi integration. Algeria and Morocco are respectively the 4th and 5th largest African economies in terms of GDP, and together they account for 77% of the Maghreb’s population and 66% of its GDP. While they both have relatively large economies, their economic profiles are quite different. Reliant on oil and gas receipts, Algeria’s rentier economy remains dominated by the state, a legacy of the country's post-independence development model. Morocco, by contrast, has capitalized on its proximity to Europe to nurture a diverse, open, market-oriented economy.

The Maghreb: A union of disunity

Commercial ties between Maghrebi countries remain very weak, unlike with Europe or even with far-flung emerging economies like Brazil, India, and China. In 2019, intra-AMU trade accounted for only 2.8% of the group’s total trade. The AMU countries represent only 0.6% of world GDP, and intra-Maghreb foreign direct investment constituted just 0.8% of the region’s total. According to Wadia Alt Hamza at the World Economic Forum, “if the five Maghreb countries were integrated, each would gain a minimum 5% rise in GDP.” The five member states recognize integration’s potential economic dividends, but lack the political will to break out of the vicious circle of mutual distrust.

Each state continues to present itself on the world stage with its own agenda and its own interests. As such, the AMU remains nothing more than a diplomatic ornament, much to the chagrin of private sector players, who often prefer to invest in sub-Saharan Africa, where the business climate is more favorable.

In light of recent developments, never has the issue of Maghrebi integration been so pressing, not only for the peoples of Northwest Africa, but also for the whole Mediterranean region, including Europe.

The Maghreb is strategically important to Europe, especially now as it seeks to reduce its dependence on Russian gas, as well as on oil and gas more generally. Shifting the geoeconomic paradigm in the western Mediterranean toward the development of diverse energy sources holds the key to the green transition, which all parties not only hope for but desperately need in order to avert the impending climate catastrophe. Even Algeria, with its dependence on oil revenues, can tell which way the wind is blowing and has initiated efforts to become a leader in green hydrogen. European investment in renewable energy in the Maghreb, complemented by a vigorous European Green Deal, would increase local job opportunities, promote development, and stem migration, all of which would contribute to stability in the region. If Europe fails to act, it risks losing out on opportunities in the Mediterranean to its rival Russia. In sum, Europe must recognize that its own stability depends on stability and economic prosperity in the Maghreb, which in turn depends not only on the green transition but also on the rejuvenation of the AMU.

Launched two decades ago, the EU’s Southern Neighborhood Policy has failed to open pathways to regional integration beyond its borders. Instead, the EU has opted to maintain relations with individual Maghreb states. The EU’s pragmatic bilateralism with Morocco and Algeria leaves little room for initiatives to smooth out the differences between the two countries. While Europe would reap the benefits of Maghreb integration, it seems unwilling to help de-escalate tensions between Morocco and Algeria. In this context, efforts to solidify regionalization in the southern Mediterranean have fallen by the wayside.

Although Europe certainly has a role to play, it is ultimately up to Algeria and Morocco to bury the hatchet. Notwithstanding their different politico-economic profiles, Morocco and Algeria share common economic interests that could form the basis of cooperation. Instead of turning their backs on one another, Algeria and Morocco should stand side by side, facing the future with a sense of common purpose.

Mohammed Ahmed Gain is a professor of Postcolonial Studies at the University of Ibn Tofail (Kenitra-Morocco), president of the African Institute for Peacebuilding and Conflict Transformation (AIPECT), and a non-resident scholar with MEI’s North Africa and the Sahel Program. The views expressed in this piece are his own.