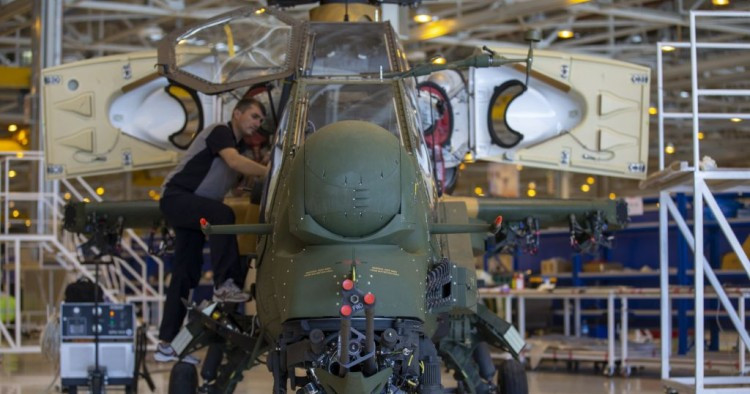 On Dec. 14, 2020, the Trump administration sanctioned Turkey’s Presidency of Defense Industries (SSB), along with key individuals involved in the purchase of the Russian-made S-400 surface-to-air missile system. The sanctions were issued under the 2017 Countering America’s Adversaries Through Sanctions Act (CAATSA), a law intended to punish Russia for a wide range of malign activities. While Turkey’s decision to purchase the S-400 — one of several decisions that have expanded Russia’s presence in Turkey in recent years[1] — presents serious risks to NATO defenses and the F-35 in particular, responding with CAATSA sanctions undermines both the military capabilities and combat readiness of a key member of the transatlantic alliance.

The CAATSA sanctions are the third part of a trio of U.S. actions. The first was to remove Turkey from the F-35 Joint Strike Fighter consortium and block the delivery of the jets to Turkey — effectively ending billions of dollars’ worth of contracts as well as Ankara’s opportunity to add the world’s only fifth-generation fighter jet to its air force before any other European nation. In parallel, Congress imposed a de facto arms embargo on Turkey. This was largely in response to Ankara’s invasion of Syria in October 2019, but hostile feelings began to emerge during the Turkish president’s visit to Washington in 2017, when two Diplomatic Security special agents, six Secret Service officers, and one Metropolitan Police Department officer sustained multiple injuries in a fight with Turkish security personnel.

The CAATSA financial sanctions now coming into effect include a prohibition on loans or credits from U.S. financial institutions totaling more than $10 million in any 12-month period, a ban on U.S. Export-Import Bank assistance, and a requirement that the U.S. oppose loans by international financial institutions benefitting the SSB. The latter threatens the ability of future Europe-Turkey partnerships to develop advanced weapons platforms. Of particular concern is whether Americans will follow up on implementation such that other countries fear being caught up in CAATSA sanctions as well.

Full blocking sanctions, including an asset freeze and visa restrictions, have been imposed on the SSB’s president, Dr. Ismail Demir, and three other SSB officers. Here, the biggest risk is that other European or Asian suppliers might hesitate to do business with the SSB because of the sanctions on its staff.

Likely the most damaging sanction is a prohibition on granting specific U.S. export licenses and authorizations for any goods or technology. This may directly impact billions of dollars’ worth of potential business, as the United States historically has been the largest exporter of weapons to Turkey. Existing U.S.-Turkey defense contracts are not canceled, but new licenses will not be granted for the export of defense products or technology transfer to the SSB, which includes the re-export from Turkey to third countries.

Export licenses are obtained from the U.S. government by the respective U.S. company with end-user information. Previously, the end user was the specific force, but now most, if not all, agreements designate it as the SSB. Existing licenses under current contracts are insufficient to guarantee the supply of spare parts for U.S.-made weapons systems, since some current contracts specify the quantities involved.

The ban on licenses for re-export from Turkey to third countries will affect the 35% of Turkish defense industry exports that contain American subsystems, per SSB figures. Turkey’s re-export problems occurred even before CAATSA, however. In 2018, Turkish Aerospace Industries signed a $1.5 billion contract with Pakistan for 30 T129 helicopters, but Honeywell could not obtain an export license for the engines. The contract is still in limbo. Similarly, Boeing CH-47 Chinook helicopters were delivered without airborne electronic warfare self-protection because BAE Systems could not obtain an export license for its Echidna Phase 2A Project system. Furthermore, any piece of equipment or part that returns to the United States for an upgrade requires a new export permit.

Substitutions for some parts can be found from alternative sources, but parts may not be substituted in products produced under license. Where Turkish industries lack capacity, sanctions will undermine readiness, obstruct planned upgrades to the Turkish Armed Forces, and hamper the export-driven growth of the Turkish defense industry. For example, engine building has been one of the weaker elements of Turkish industries, especially for defense, but also for general aviation, as was vividly displayed in the Altay tank project, now delayed for years for lack of appropriate engines and transmissions.

Any deals done through foreign military sales might survive, but sanctions threaten equipment and systems that rely on parts usually obtained via commercial channels, such as the crucial early warning and control aircraft E-7T AEW&C Peace Eagle. This type of plane, in addition to the KC-135 Stratotanker aerial refueling aircraft, has been the sine qua non of Turkey’s Libya campaign. Without it, operational capacity will be significantly hampered. Similar problems might arise with the P-235 Meltem II, which is a CASA CN-235 with several key Honeywell upgrades, such as ground proximity warning, weather radar, and satellite communications; GE Aviation’s F110 afterburning turbofan jet engine, which is license-built in Eskişehir by TUSAŞ Engine Industries for F-16 fighter aircraft; and with Lockheed's service life extension program for the F-16s, which are the backbone of the Turkish Air Force. Turkey’s order of Korea Aerospace Industries’ KT-1T trainer aircraft, developed in cooperation with Lockheed, is also under threat.

Procurement issues have already arisen with the Phalanx MK-15 Block 1B Close-In Weapons System, Raytheon's Rolling Airframe Missile MK-49 mod-3 guided missile launching system, and Lockheed's MK-41 vertical launching system with 16 cells, which was to be installed on the brand-new Turkish frigate TCG Istanbul. As a result, at the launch ceremony, only alternative Turkish systems were mentioned. Another potentially serious problem is that GE Marine is the contractor for the gas turbines to power all ships for the Turkish Navy’s new DIMDEG fleet replenishment ship.

If sanctions continue, Turkey will be forced to make purchases from other countries to maintain defense readiness — not necessarily from Russia, but perhaps South Korea or other European countries willing to engage. The Turkish government amplifies the view that every Western product has an alternative. While there is some truth to this claim, not every alternative offers the same quality, and substitutes pose a threat to NATO interoperability.

Like many of its domestic industries, Turkey’s defense industry relies on imported parts to manufacture high-quality products for export. These companies already sell as much domestically as is provided for in the defense budget, and their growth is powered by foreign sales, based on the quality of their products. If parts can’t be imported from America, companies will find alternatives — perhaps not as good as their Western counterparts, but significantly cheaper. Off-the-shelf products are always cheaper than your own R&D, and they provide an opportunity for reverse engineering. By using such substitutes, Turkey might produce lower quality products and damage its brand, but it might also make cheaper products and open new markets. Such is the case with armored combat vehicles. The Turkish defense industry began with licensed production of amphibious armored combat vehicles, but after facing procurement problems, developed its own vehicles and systems, such as armored amphibious rigs and anti-tank vehicles, with a wide range of turret options.

Washington is increasingly disregarding Turkey’s strategic geographical position as a matter of importance. Yet the reality is that Turkey remains the only country to have successfully blocked unchecked Russian military expansionism in the past 16 months. In 2020, in Idlib, Syria, the Turkish military single-handedly halted a Russian-Iranian offensive. Shortly thereafter, Turkish-led forces in Libya delivered another blow to Russia, and in the last year, Turkey successfully maneuvered itself into Nagorno-Karabakh, preventing a full Russian takeover. It would be indeed tragic if Russia grabbed another part of Ukraine or Georgia because a new generation of analysts has not grasped this. Russian expansionism won't wait while Congress reviews sanctions on Turkey.

Ukraine, Georgia, and NATO’s entire eastern membership are currently under threat from Russia’s massive troop movements and “combat readiness” exercises. If Russia escalates further, the first unit to respond would be NATO’s Very High Readiness Joint Task Force (VJTF). As of 2021, Turkey took over command of the VJTF from Poland. Built around Turkey’s 66th Mechanized Infantry Brigade of around 4,200 troops, the VJTF includes a total of around 6,400 soldiers in units from Albania, Hungary, Italy, Latvia, Montenegro, Poland, Romania, Slovakia, Spain, the U.K., and the U.S. Turkey has made substantial investments in the VJTF — among the most mobile in NATO — particularly in its logistics and ammunition requirements planning. The latest models of Turkish armed vehicles, anti-tank missiles, and howitzers have been allocated to the force.

If viewed from a short-term perspective, CAATSA sanctions provide a tool to punish Turkey for its S-400 purchase. But the long-term damage to the transatlantic security structure outweighs any short-term gain. Sanctions are a blunt instrument that will cause significant collateral damage to American business as well as the military capabilities and combat readiness of a key member of the transatlantic alliance and the relationship between these long-time allies.

To protect transatlantic security and the alliance itself, the United States must engage at the highest level to bring Turkey back in from the cold. Aside from the S-400s and F-35s, other problems have emerged in recent years that must be addressed, starting with the countries’ respective policies in Syria. Without such high-level dialogue, opportunities will be missed and Russia will keep exploiting the void.

[1] Turkey also contracted with Rosatom to build the country’s first nuclear power plant and granted it rights to operate a commercial port on the Mediterranean, adjoining the plant. In addition, Russia’s construction of the TurkStream natural gas pipeline via Turkey achieving a longstanding goal of ending Moscow's dependence on Ukraine to transport natural gas to Europe, giving Gazprom a dominant position in the Balkan market. In recent years the International Investment Bank, a Russian-controlled development bank that critics have dubbed Putin's Trojan horse, has started to occupy a prominent place in Ankara as well.