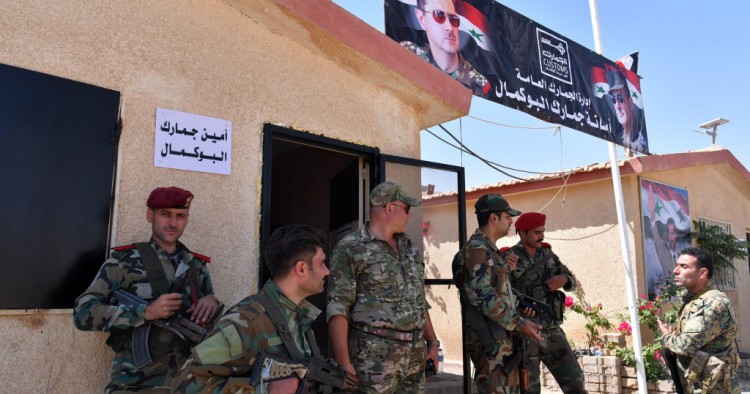 In recent weeks, the Syrian pound has spiraled into a deep crisis, reaching as low as 1,000 to a single U.S. dollar. It was worth double that earlier this year. With fuel shortages continuing and meaningful reconstruction looking more like a figment of the imagination, the Assad regime’s response appears to be one of conscious economic isolation. Imports are being limited and access to the U.S. dollar is increasingly restricted to those deep within the regime’s inner circle. Meanwhile, instability across the country is rising, with open conflict ongoing in the northeast and northwest and nascent insurgencies re-emerging in the southwest and the central desert. Making matters worse, challenges to Syrian sovereignty continue apace. This is the “victory” won by Bashar al-Assad and his Russian and Iranian allies.

But in a matter of weeks, the situation looks set to get a lot worse. After several years of behind-the-scenes efforts, the Caesar Syria Civilian Protection Act will be signed into law in Washington as part of the annual National Defense Authorization Act. It is an extraordinarily expansive and aggressive piece of legislation, allowing for a significant expansion of sanctions against Syrian regime figures and bodies, including the Central Bank and multiple sectors of the state economy. More significantly, the “Caesar Bill” will place an expectation on the U.S. government to sanction any individual or organization anywhere in the world who provides any form of financial support to the Syrian regime that furthers its ability to repress its people.

For starters, that places Russia and Iran squarely in the crosshairs of an inevitable escalation in American sanctions in 2020. Given the existing “maximum pressure” campaign on Iran, the real change will come regarding Russia — a country that until now, the U.S. government has mostly avoided punishing for its crimes in Syria. Everything from Russia’s military and its leadership, to weapons manufacturers, businessmen, private military contractors, and the energy industry could fall prey to punitive American sanctions, when the Caesar Bill takes effect.

Therefore, this new legislation looks set to further strangle the Syrian economy, to isolate it from the global system, and to substantially broaden America’s ability to punish actors involved in committing the Assad regime’s crimes or in providing the kind of support that allows them to be perpetrated. Beyond that, the Caesar Bill will also provide the Trump administration with the powers and the expectation to sanction U.S. allies or entities existing within allied countries that choose to re-engage with the Assad regime or the Syrian economy.

Until now, the Trump administration has had to rely on verbal threats and private warnings to discourage allies — particularly in Europe and the Gulf — from re-engaging politically or reinvesting economically in regime areas of Syria. Now such actions will risk inviting significant U.S. economic sanctions. Ideally, the powers resulting from the Caesar Bill will serve an effective deterrent power that persuades U.S. allies to cease re-engagement or to stop it before it begins. If it fails to deter, Washington will be placed in a very difficult position, facing an executive, legally-mandated expectation to sanction an ally.

American leverage in Syria declined somewhat in recent weeks, following President Donald Trump’s order to withdraw, Turkey’s intervention in the northeast, and then Trump’s sudden pivot away from withdrawal back to countering ISIS and “protecting the oil.” Now that U.S. troops appear to be settling back into their re-asserted mission, the introduction of the Caesar Bill will re-enhance its leverage, though to what extent remains unclear. The Assad regime will not surrender if America cripples the Syrian economy and isolates Damascus from the rest of the world. Neither will Iran. That is clear. However, Russia may become increasingly sensitive to being the public owner of a quagmire that will inevitably deteriorate and require deepening levels of financial investment, military security, and political protection.

As problematic and criminal as Russia has been in Syria, Moscow does appear to desire an eventual settlement to the conflict and an end to Syria’s international isolation. In that regard, Russia is determined to achieve rubberstamps from the likes of America, key European governments, and from the countries of the Middle East itself. Provided it is enforced in full, the Caesar Bill will make that Russian ambition an impossibility without, at minimum, significant progress in a UN-run political process shaped around UN Security Council Resolution 2254.

In Washington, there is little expectation that Moscow — or indeed Damascus or Tehran — will suddenly become flexible actors. Instead, a continued U.S. military presence in Syria, paired with economic and diplomatic pressure, is intended to represent a campaign of attrition that seeks to wear down confidence within the pro-Assad alliance and coerce compromise. This is therefore a strategy predicated on long-term interest and investment in Syria policy — an assumption that is likely to prove difficult, given President Trump’s unpredictability and general disregard for Syria’s importance. Democratic candidates for president appear similarly disinterested in a long-term pressure campaign.

For now, the Caesar Bill’s imminent arrival into law is an extremely significant development. But to what end and for how long, only time will tell.

Charles Lister is a Senior Fellow and the Director of MEI's Countering Terrorism & Extremism program. The views expressed in this article are his own.