Cairo and Moscow: Limits of Alliance 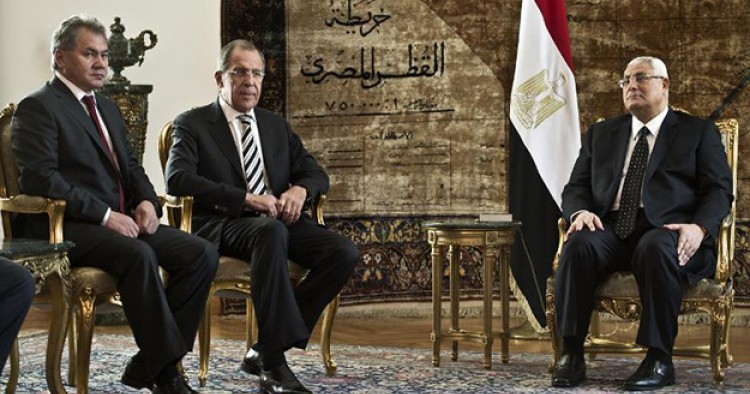 Egyptian-Russian relations have recently been marked by a substantial increase in diplomatic activity amid a media frenzy over a potential arms deal. These developments have given rise to suggestions that Egypt's foreign policy is shifting away from the United States and toward Russia—a major realignment given Egypt's extensive political and military ties with the United States since the 1970s.

The flurry of Egyptian-Russian diplomatic activity in the past months has indeed been remarkable. The visit of Egypt's foreign minister Nabil Fahmy to Moscow in September was followed in October by an unusual visit to Cairo by the Russian intelligence chief, Viackeslav Kondraskou. In November, an Egyptian popular diplomacy delegation that included former diplomats, former MPs, public figures, journalists, and artists visited Moscow to "express  appreciation" for Russia's support of the "June 30 revolution,"[1] a Russian warship docked at the port of Alexandria for the first time since 1992, and a high-level Russian delegation including Foreign Minister Sergey Lavrov and Defense Minister Sergei Shoigu visited Cairo to hold talks with their Egyptian counterparts.

The timing and pace of the expansion of bilateral ties with Moscow has been primarily seen against the backdrop of Cairo's relations with the United States, its key strategic ally and military donor. These relations have been bedeviled since the removal of President Mohamed Morsi last July. Although the United States has acknowledged the status quo in Egypt and avoided labeling the regime change as a "coup," it has undertaken a number of punitive measures that produced a chasm between it and Egypt's interim government and defense establishment. Troubled by the bloody crackdown on Morsi's supporters in August, the Obama administration called off the biannual joint U.S.-Egypt military exercise "Bright Star" and halted the delivery of military hardware to Egypt, including F-16 fighter jets, Apache helicopters, Harpoon missiles, and tank parts.

The Egyptian rapprochement with Moscow seems to reflect an Egyptian interest in creating balance in its foreign relations by diversifying its alliances and minimizing its heavy reliance on Washington. It is also driven by the rising Russian influence in Middle East politics, particularly in the Syrian conflict, and by a shared Russian-Egyptian interest in combating militant Islamic groups. However, there are a number of reasons why it is highly unlikely that Egypt's leadership aims to substitute Washington with Moscow as its chief international patron.

First, the Cold War's bipolar structure, which allowed developing countries to play superpowers against each other in order to extract political and economic concessions from both, collapsed more than 20 years ago. Russia today is neither capable of supporting Egypt as generously and defiantly as the Soviet Union did in the 1950s and 1960s nor is Egypt as strategically significant to Moscow as it was at the height of U.S.-Soviet rivalry. Egypt's leaders certainly realize the constraints imposed by the U.S.-dominated global configuration of power and have repeatedly emphasized that their interest in developing closer ties with Moscow does not come at the expense of their strategic alliance with the United States. Asked by the daily Kuwaiti Al-Siyasa about whether Egypt intends to introduce changes to its alliance with the United States and the European Union, General Abdul-Fattah el-Sisi, the Commander-in-Chief of the Egyptian Armed Forces, said that "Egypt's morals" and political "prudence" do not sanction such maneuvers.[2]

Second, the deep, cumulative effect of more than three decades of close Egyptian-American cooperation, particularly on the military and security fronts, makes such closeness unlikely to fundamentally diminish. Military cooperation between the two countries has developed over the years into a multifaceted program that includes, from the United States, a generous $1.3 billion annual aid package, substantial armaments supplies, training of Egypt's military personnel in the United States, and transfer of technology. Egypt provides the United States with a guarantee of secure naval passage through the Suez Canal, the provision of military facilities, and limited access to Egyptian airfields. The two countries also coproduce weaponry and conduct joint military exercises. Any attempt to dismantle this edifice would be financially costly to the Egyptian military and practically difficult.

The working relationship between Egypt's array of security agencies and their American counterparts is likewise solid and deep-rooted. Joint cooperation in the fight against terrorism intensified after 9/11 and has continued unabated. In a recent interview with the Washington Post, the director of Egypt's General Intelligence Service, Mohamed Farid el-Tohamy, said that he is "in direct contact with [Director] John Brennan at the CIA and the local station chief, more than with any service worldwide."[3] Information sharing with U.S. intelligence agencies is expected to increase in light of the intensification of Egypt's war against militant insurgents in Sinai.

Third, diplomatic relations between any two states are bolstered when the political elites of both countries are tied by like-mindedness and congruence of opinion. One reason behind Egypt's sudden turn to the West in the 1970s was the personal disposition of its leader, Anwar Sadat, who disliked the Soviets, describing them once as a “crude and tasteless people."[4] In contrast, the harmonious friendship American politicians (particularly President Jimmy Carter) developed with Sadat played a substantial role in facilitating the conclusion of the Camp David Accords in 1978.

Despite strong disagreement between Egyptian and American officials over the events accompanying and following the removal of Morsi, there is nonetheless a deep attachment to, and even admiration for, the values and ethos of the West among the majority of Egypt's top brass. None of them witnessed the golden age of Egyptian-Soviet relations, which was forged in the mid-1950s and lasted until the mid-1970s. El-Sisi was only 18 when Sadat, in 1972, expelled the Soviet military advisors who had been stationed in Egypt since the country’s disastrous defeat by Israel in 1967, effectively ending what had represented the zenith of Egyptian-Soviet military cooperation. Egypt's senior military officers thus have no special affection for Russia or its military doctrines. The majority of them, including el-Sisi, received training in the United States and/or have participated in joint military exercises with the United States.

Fourth, major foreign policy realignments generally follow major domestic political changes, such as profound revolution, key changes in leadership, or the restructuring of socioeconomic policies. The change of regime in Egypt this past summer did not establish a new state with new institutions, doctrines, and aspirations, but rather brought back the old state, reviving its security apparatus and reinforcing its deep-rooted patterns of alliances. The massive crackdown on protestors, the return of Mubarak loyalists to positions of prominence, and the restoration of the alliance between the security apparatus, the bureaucracy, and the business community attest to the return of much of the pre-2011 state. And, as Egypt's foreign policy did not witness much change under the rule of the transitional SCAF government and then under Morsi, it is unrealistic to expect a revolutionary change in that policy today.

It can be argued that Egypt's flirtation with Russia does not mean a shift in the country's foreign policy away from the United States as much as an attempt to induce the United States to shift its Egypt policy back to where it was before. In fact, Mubarak often employed this tactic of getting closer to competitors or enemies of the United States, such as Iran, in order to pressure the United States and to arouse concern among American politicians about the prospect of losing Egypt, encouraging them to amend unfavorable policies.

Whether one looks at Egypt's relations with Russia and the United States from a geostrategic standpoint, the perspective of political elites, or the angle of domestic political structure, the conclusion reached is the same: Egypt seeks closer ties with Russia, but it remains allied to the United States, the current crisis in bilateral relations notwithstanding. Egypt's relationship with Washington has indeed bent many times over the past decades, but it has never broken. A massive change in Egypt's foreign policy behavior will only occur if a massive change takes place in the underlying determinants of that behavior.

[2] "El-Sisi to the Kuwaiti Al-Siyasa: Those Who Realize the Magnitude of Egypt's Problems Will Not Enter the Presidential Race," Al-Araby, 21 November 2013, http://www.alarabynews.com/?p=126642.