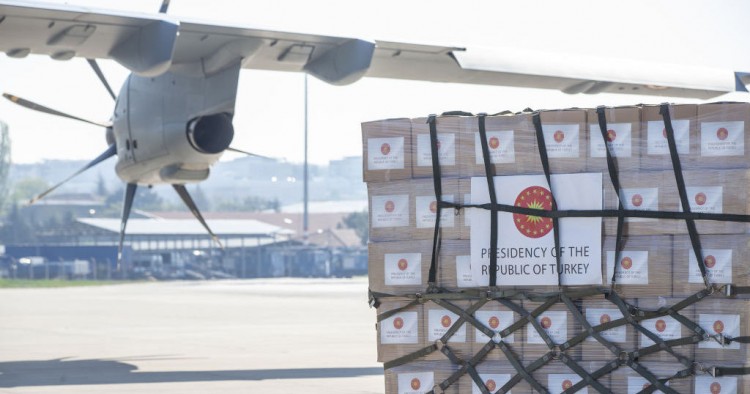 Even before the coronavirus upended life around the world, Turkey’s President Recep Tayyip Erdogan was already grappling with a host of problems. At home, a flailing economy, breakaway rival parties formed by former senior members of the ruling Justice and Development Party (AKP), and an ascendant opposition had become a thorn in his side. The country’s strained ties with the U.S., the EU, and Russia, its troubled relations with its neighbors, and its growing isolation in the region all added to his headache. Then COVID-19 hit the country. Many argue the virus will exacerbate Erdogan’s problems but where others see a problem, Turkey’s president sees an opportunity. He is using the crisis to undercut the opposition, which is at the forefront of the fight to contain the outbreak, as well as distribute government contracts to his loyalists without any regard for the legal process and punish his critics. Erdogan is relying on the virus to score foreign policy points as well. Sending medical aid to its neighbors and beyond helps assert Turkey’s leadership and improves its shattered image. The coronavirus likewise provides an excuse to remove a long-time irritant in Ankara’s ties with Washington and perhaps end its isolation in the region.

As of late April, Turkey claimed it has received 100 requests from around the world for medical aid (including masks and other personal protective equipment) and reportedly delivered supplies to 53 countries, from China to Lebanon and the UK to Somalia. The geographic span of the deliveries speaks volumes about Ankara’s soft power aspirations.

The Balkans, where Turkey has emerged as a key player under the ruling AKP — and even as a competitor to the EU — has been one of the primary targets. In late March, Albanian Prime Minister Edi Rama, who enjoys close ties to Erdogan, issued a personal call for help. Seeing China, Russia, the EU, and U.S. deliver aid to the region, Turkey’s leader did not hesitate to act. Turkish military aircraft delivered aid to five western Balkan countries, including Serbia, the largest post-Yugoslav republic, which has seen a remarkable improvement in ties with Turkey in recent years.

Engaging with the West

Turkey has also engaged in corona diplomacy with the West, with which it has strained ties over a range of issues, responding to a joint NATO initiative to send supplies to European countries affected by the pandemic, including Spain, Italy, and the UK. The aid has been channeled through the Euro-Atlantic Disaster Response Coordination Centre (EADRCC), the Alliance’s primary civil emergency response mechanism and the one that has played the most public-facing role in its efforts since the outbreak. Ankara’s decision to send aid through EADRCC is meant to highlight its commitment to the Alliance.

Turkey has also sent medical aid to the U.S., but the coronavirus has played a bigger role in helping to ease tensions with the U.S. in another way. Ankara recently announced that it would postpone the activation of the S-400 missile defense systems, scheduled to take place this month, citing complications stemming from the novel coronavirus pandemic. Washington and Ankara have been locked in a conflict over the latter’s purchase of the Russian S-400, which has been criticized by the U.S. for posing a security threat to NATO’s equipment in Turkey, prompting Congress to pass legislation to punish it. At a time when the Turkish economy has been hit hard by the pandemic and Ankara is in talks with Washington about whether the U.S. Federal Reserve could expand currency-swap arrangements to include the Turkish monetary authority, the coronavirus provides the perfect face-saving way for Erdogan to delay activation and prevent another meltdown in Turkey-U.S. ties.

Reaching out to the Middle East

Turkey has reached out to its Middle Eastern neighbors as well. It sent 10,000 test kits, 4,715 overalls, 20,000 aprons, 2000 glasses, 4000 N95 masks, and 73,000 three-layered masks to Iran, which saw a severe outbreak of COVID-19 in February. Iraq, Lebanon, Algeria, Yemen, and Tunisia, as well as the Government of National Accord in Libya, Ankara’s staunch ally, have also benefitted from Turkish assistance.

Turkey has even made overtures to its adversaries. On April 10, the government authorized the sale of medical gear to Israel, with which relations have been frosty since the late 2000s. In return, Ankara obtained permission to deliver assistance to the West Bank ten days later. Turkey was also able to fly back Palestinian students enrolled at its universities to Tel Aviv’s Ben Gurion Airport. Erdogan won praise from Ahmad Tibi, a leader of the Joint List, an alliance of Arab-majority political parties in Israel. Ankara has also attempted to use aid and the repatriation of Armenian migrant workers amid the pandemic to improve ties with Yerevan.

But corona diplomacy can only do so much

While some countries have welcomed Turkish aid, Ankara’s problems with its neighbors and Western allies are too serious to be resolved by a few symbolic steps. Turkey’s S-400 move will alleviate the pressure building on President Donald Trump to apply sanctions for now, but Turkey will have to assure the U.S. that it will not turn on the system if it wants the tension over the issue to go away. The problems that have poisoned Turkey-EU ties are unlikely to be solved anytime soon, and Turkey’s immediate neighbors continue to view its role in the region as a source of instability.

The most immediate backlash to Turkey’s corona diplomacy came from Yerevan. On April 13, the Armenian Ministry of Foreign Affairs denied media reports that negotiations with Turkey had been underway. Worse still, Ankara got into a diplomatic tussle with Beijing after Chinese aid to Armenia arrived in boxes captioned “May our friendship be higher than Mount Ararat and longer than the Yangtze River.” Mount Ararat, considered a national symbol by Armenians, is on the Turkish side of the border, closed since the early 1990s.

Ankara’s soft power offensive is likely to be more successful further afield, outside its immediate neighborhood. That includes Central Asian nations such as Kyrgyzstan or Uzbekistan, where President Shavkat Mirziyoyev has initiated gradual liberalization after the death of long-time President Islam Karimov, no friend of Ankara. Mirziyoyev and Erdogan spoke on the phone earlier this month, signaling an opening in bilateral ties. Pakistan and Afghanistan, both of which traditionally enjoy good ties with Turkey, will greatly appreciate Turkish support as well.

Turkey is likely to further expand its corona diplomacy to Sub-Saharan Africa, enhancing its already strong influence there. The region is yet to feel the impact of COVID-19 and demand for international assistance is likely to grow in the months ahead. On April 9, Turkey delivered supplies to Guinea and eight days later to Somalia, a long-standing recipient of assistance from the Turkish state as well as AKP-aligned NGOs. Other aid recipients include Mozambique, Uganda, Lesotho, and Sudan. Turkey’s businesses, diplomats, and aid agencies have made inroads into Sub-Saharan Africa in past 10-15 years. Originally, it was the Gulenists, a religious movement and former AKP allies, who planted the flag for the state, but Ankara has long been on a mission to stamp out their influence and take the reins. The coronavirus pandemic is a chance Erdogan would gladly seize.

Erdogan has recently claimed that Turkey will play a key role in the post-COVID world but a quick look at the problems he faces at home and abroad tells a much less flattering story.

Gönül Tol is the Director of MEI's Turkey Program. Dimitar Bechev is a senior fellow with the Atlantic Council’s Eurasia Center, a research fellow at the Center of Slavic, Eurasian, and East European Studies at the University of North Carolina at Chapel Hill, and the director of the European Policy Institute, a think-tank based in Sofia, Bulgaria. The views expressed in this piece are their own.