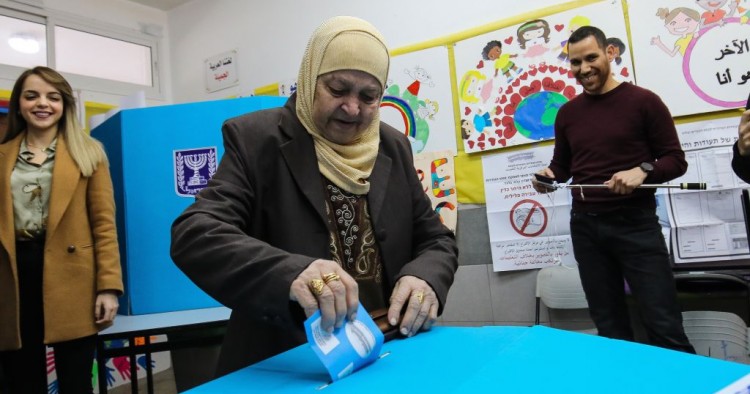 While attention in the third Israeli general elections in a year has focused on the performance of the caretaker prime minister Binyamin Netanyahu, a powerful light must be shed as well on the successful performance of Israel’s Palestinian citizens, who again increased their representation in Israel’s parliament.

The 21% of Israeli citizens who are Palestinians—those who remained in their homes when Israel was created in 1948—have proved that they are a force to be reckoned with in Israeli politics even as their fellow Palestinians in the West Bank, East Jerusalem, and Gaza were not allowed to vote in elections that affect their lives.

When the Joint List broke up last year, the April 2019 elections netted Arab parties only 10 seats in the Knesset. In September when the List was reunited, it won 13 mandates, and in the March 2020 elections a reinvigorated Joint List again increased its presence in the Israeli Knesset by two more seats.

The unity displayed by the Arab Joint list headed by Ayman Odeh was only possible because of the understanding that unity requires respect for diversity. The four parties included in the Joint list include the left-wing Arab/Jewish Front for Peace and Equality (Hadash) party, the Islamic Party, the Arab Movement for Change, and the nationalist Palestinian Balad party. By respecting the various trends within Palestinian society, the Joint List was able to rise above internal differences and present a unified list that is stronger than the sum of its individual parts.

The success of the Joint Arab List comes at a time when democratic norms are in retreat in Israel. Democracy in Israel is put into question when Israelis have no problem voting for a leader two weeks before the beginning of his trial on corruption charges. Democracy in Israel is under threat when Israelis support the continuation of military rule over four million Palestinians, apartheid laws and policies in the Occupied Territories, and muzzling the independent judiciary.

Ironically one of the main contributions to the surge in voting among Palestinian citizens of Israel was the ill-conceived Trump/Netanyahu plan unveiled two months before the Israeli elections. Tucked away on page 13 of the 181-page U.S. plan is what amounts to a call for population transfer. While the document rejects any return to Israel of the 600,000 Israelis residing in illegal settlements in the West Bank, it proposes to transfer some 250,000 Palestinian citizens of Israel to the Palestinian “state.” According to this American/Israeli plan, the parties should consider the “possibility, subject to the agreement of the parties, that the borders of Israel will be redrawn such that the Triangle Communities become part of the State of Palestine.”

Jared Kushner, the architect of this plan, claims to have read 25 books on the Middle East conflict. Clearly, he didn’t read Edward Said’s classic ‘Orientalism’ when he suggested the erasing of Palestinians’ citizenship and moving the borders without their involvement. If he had, he would have understood why his proposal to deal with people and their futures as if they were pawns in a chess game is a classic example of neo-colonialism.

Palestinian Arabs are proud people who are generous and who value dignity and honor. While democracy and power-sharing have not been regular features in Arab culture, Palestinian citizens of Israel have debunked the claim that Arabs don’t understand democracy and that they are not ready for it. The great electoral success of Arabs in Israel is proof that, if given a genuine opportunity, Arabs like all other people in the world will seize the right to be the masters of their own destiny and they will unify and abide by democratic norms.

The lessons of the success of the Arab leadership in Israel … that unity is critical … can be learned and applied throughout the Arab world.  In particular, the example of Palestinians in Israel could be a useful example for Palestinians in the Occupied Territories, where division has continued because of the unwillingness of Fatah and Hamas to find a power sharing formula but insist instead on playing a zero-sum game.  The success of the Joint List should be a striking example, too, for the world community trying to find a solution to the Palestinian-Israeli conflict. Not only should the successful exercise of democratic rights by Palestinian Israelis encourage Palestinians towards unity, it should also encourage the world to continue pushing the concept of self-determination, giving  Palestinians a chance to live in their own free and democratic state alongside a safe and secure state of Israel that shows equal respect to all of its citizens.

Daoud Kuttab an award-winning Palestinian journalist is the director-general of Community Media Network in Jordan and is a former Ferris Professor of Journalism at Princeton University. He is a columnist with Al-Monitor and a reporter for Arab News. His twitter handle is @daoudkuttab.