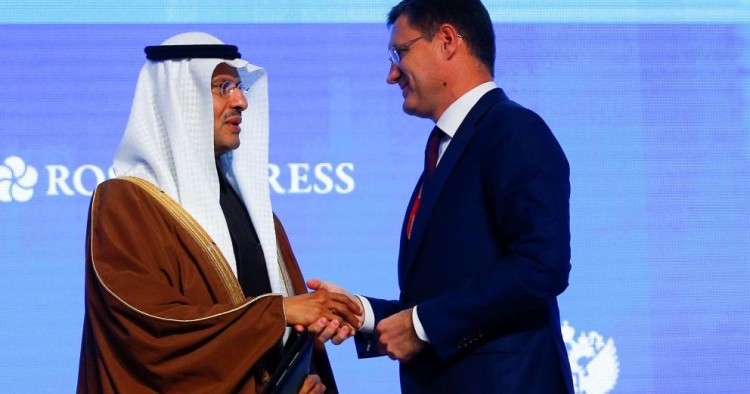 Saudi Arabia’s recent decision to call for an urgent OPEC+ meeting was driven by a simple logic. In spite of its obvious advantages over other oil producers, the kingdom is still taking serious risks as it pursues an oil price war.

On April 1, 2020, the Vienna agreement between the members of OPEC and a group of non-OPEC oil-producing nations, including Russia, officially expired. For more than three years prior to this, the countries participating in the deal had agreed to cut their production to maintain stable and relatively high oil prices on the international market. The deal’s end marks the beginning of a new oil price war in which hydrocarbon producers will try to increase their market share by exporting the maximum volume of oil at low prices, thereby squeezing their competitors with higher production costs out of business. However, the winner in this conflict is not as obvious as it seems.

Popular opinion suggests that Saudi Arabia is the clear favorite in this global struggle for market share. The kingdom’s significant spare production capacity is the main difference between it and the majority of other oil producers, which have a much more limited ability to vary their output. This, in turn, creates an important lever for Saudi influence: By adding or removing oil from the market, Saudi Arabia is able to influence price changes, affecting market dynamics. At the same time, the low cost of production and wide range of oil grades produced in the kingdom provide Riyadh with access to both a significant number of consumers and the ability to tolerate extremely low prices. Saudi Arabia has already declared its readiness to boost its oil production to a record level of 12.3 million barrels per day (mbpd) in April against 9.8 mbpd the previous month, with the possibility of further increasing it to 13 mbpd in the future. Export volumes will also reach a historical maximum of about 10 mbpd. Moreover, in March, Riyadh announced unprecedented discounts on its April oil exports to Asian and European consumers, a move many experts have argued will make oil from other producers (primarily Russian grades) uncompetitive.

The devil is in the details

Yet, it is still too early for the Saudis to celebrate their victory. As always, the devil is in the details. First, the kingdom’s ability to tolerate an extended period of low oil prices is limited by the inflated expenses of the Saudi leadership. These include both ambitious infrastructure projects implemented throughout the country, as well as an expensive social contract between the ruling family and Saudi citizens. The latter involves the redistribution of part of the state's income to the population in the form of direct and indirect subsidies, in exchange for their loyalty and acquiescence. Combined with Riyadh’s expensive foreign policy adventures, such as its intervention in the Yemeni conflict, the kingdom’s budget has been consistently in the red in recent years. As a result, Saudi Arabia will only be able to break even if oil prices exceed $84 per barrel. If oil prices fall below $35/barrel, the Saudi budget is expected to run a deficit of around $85 billion. For now, the shortfall can be made up by drawing on previously accumulated financial reserves. However, this is only a temporary measure. Sooner or later the Saudi government will have to impose budget cuts, negatively affecting either its development program or the regime’s social stability.

Second, it is not clear how quickly Saudi Arabia will be able to increase its oil output. As recognized by the Saudi side itself, the country can actually only produce 12 mbpd. Another 0.3 mbpd will come from the country’s oil reserves, which are currently at a historical low of 154 million barrels and will only be sufficient to maintain the agreed outflow of 0.3 mbpd for the next 12 months. This situation is extremely risky for Riyadh as the reduction in available reserves will make it hard for the kingdom to respond to any unforeseen challenges that may emerge, such as a potential repeat of the September 2019 attacks on its Khurais and Abqaiq oil processing facilities, which temporarily knocked half of the kingdom’s production capacity off-line. The ongoing program to convert Saudi power plants to run on natural gas, scheduled maintenance of domestic refineries, and the reduction of domestic demand for fuel as a result of the COVID-19 pandemic will all help to free up additional resources for export, temporarily easing pressure on Saudi reserves. However, this will not solve the issue of production capacity growth to reach the promised level of 13 mbpd, nor will it help the Saudis sustain it.

Thirdly, the global supply glut aggravated by the unprecedented fall in oil consumption due to the pandemic turns the current oil price war into a brutal knife fight, as the oil market is not simply oversupplied but also shrinking. The Saudis have to fight to retain existing market share, and not to meet new demand, as they did previously (for instance, during 2016-19, when Riyadh competed with Moscow for the demand surplus in China). While Saudi Arabia’s spare production capacity would give it a major advantage in a fight over “new barrels” from growing demand, winning the fight for demand in a shrinking or stagnating market requires more than just a willingness and ability to increase supplies. Meanwhile, in the struggle to maintain existing market share, the kingdom’s opponents have their own trump cards to play as well. In the case of China, neither Russia nor the U.S. should be discounted. In mid-January, China and the U.S. signed a so-called “phase-one” trade deal, under which China pledged to boost its purchases of American oil and petrochemicals. For its part, Russia has its own advantages, including geographical proximity to China, which makes it cheaper and faster to export oil. In Saudi Arabia’s case, the time and cost of transportation might be a real challenge.

The clock is ticking

As a result, the kingdom may fail to find enough buyers for the additional barrels it plans to produce while its global storage capacity is seriously limited. According to some estimates, Riyadh has about three months to find long-term buyers for excessive volumes it brings to the market. Otherwise, it will need to consider options to reduce output. The situation is aggravated by the complex nature of the global market, where it is not always possible to take all of the key parameters into account. For instance, the Saudi leadership was hardly prepared for the fact that the GCC countries’ plans to increase the volume of oil exports would raise the demand for tanker freight and carrier services. The increased cost of rent significantly reduced the price advantage offered by Saudi Arabia’s discounts. Consequently, Russian Urals-grade oil (mainly exported to Europe), which has fallen significantly in price due to the negative impact of COVID-19 on fuel demand in Europe, suddenly became just as interesting for Chinese consumers as Saudi oil due to its low price (even with the transportation cost added). As a result, in March, Chinese oil importers signed deals with the Russian suppliers for a record level of oil deliveries in April and May 2020.

All of these factors suggest that there will be no easy or risk-free victories for Saudi Arabia in the oil price war. Meanwhile, losing the price war would entail major costs, both in terms of the kingdom’s global image as well as for its economy, likely leading it to reduce production in the end. Perhaps mindful of this, the Saudi side seems prepared not only to fight but also to talk to its rivals, and consequently, Riyadh is keeping its channels of communication open and has called for an emergency OPEC+ meeting.

Nikolay Kozhanov is a Research Associate Professor at the Gulf Studies Center of Qatar University and a Senior Research Fellow at the Institute of World Economy and International Relations (IMEMO) under the Russian Academy of Science (Moscow), where he leads research projects on Iran’s political economy and foreign policy. The views expressed in this article are his own.