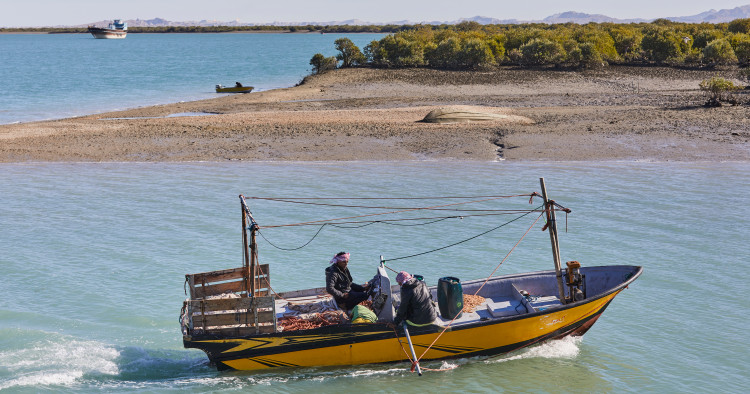 Overfishing in the Gulf waterway is an acute problem, and Iran and China might not be enforcing proper restrictions on commercial trawlers. In recent years, the introduction of industrial-scale fishing has harmed local fishermen off the coast of Iran.

Equipped with sonar systems, commercial trawlers are responsible for a 50% decline in yields for local fishermen in the past five years. A report issued by Iran’s parliament states that Chinese trawlers could soon take in 46,000 tons of commercial fish. Due in large part to the practice of industrial-scale fishing, some species not traditionally associated with commercial fishing are in peril. In 2019, 150 dolphins perished in commercial dragnets. In China, seahorses are often dried and ground into a powder that is put into teas and soups, so Chinese vessels reflag with Iranian flags to fish for them at an industrial scale. Some vessels fly fake flags, but when Iran’s navy discovers this, it does not take away their fishing licenses.

Industrial trawlers have also led to a rise in unemployment rates near the coast to 12.3%. In Hormozgan Province, some 70% of people make their living from the sea, and 450 fishing boats once operated there. Four years ago, some of these boats were denied new licenses. New licenses were then given to foreign vessels. Tehran denies that it granted licenses to Chinese boats, and until recently, insisted that Chinese trawlers did not operate in Iran’s waters, even though they were first spotted as early as 2014.

China itself said its boats were not in Iranian waters and no official fishing agreement existed. But environmental policy-makers in Iran are concerned the new 25-year strategic partnership with China concluded this year might change the situation. Beijing did, however, confirm that private Chinese companies, contractors, and fishermen are free to make their own agreements with Iran. Tehran claimed that only two commercial ships fished for tuna in Chabahar, although local fishermen said they felt like tenants in waters owned by the Chinese.

The sons of Iran’s ruling class, sarcastically named aghazadehs ("gentlemen’s breed") given their sense of entitlement, reportedly run a fishing mafia that manages commercial trawlers. Tehran claims that overfishing has little to do with these aghazadehs, and that only a few registered local companies operate commercial ships, but 16 Chinese vessels carrying Iranian flags were rumored to operate under the protection of the aghazadehs. The Chinese also rented boats to Iranian fishing companies in 2018.

These contrasting accounts upset some in the ranks of Iran’s Islamic Revolutionary Guards Corps (IRGC). The IRGC navy asked to distribute 20 licenses to local fishermen on the island of Abu Musa in 2019, and charged President Hassan Rouhani’s government of reluctance to grant the licenses. In Hormozgan Province, new government regulations make it hard for local communities to obtain fishing licenses.

The IRGC navy also stepped up inspections of illegal vessels. But even when it received promises that these vessels would halt operations, they still hunted for aquatic species that yield feedstock in other industries. In 2019, the IRGC navy confiscated the cargo of 19 trawlers in Iranian waters, most of which were Chinese. In 2020, they held up 34 trawlers operating in illegal zones. But 60 commercial ships still routinely fished in Iran’s waters, while only less than five were inspected. The Chinese trawlers with licenses even received the equivalent of $663,000 in fuel subsidies from Tehran (now worth $1,166,000 at today’s free market exchange rate).

Iranian scientists do not recommend commercial fishing along its shallow Gulf coasts, which are only 90 meters deep, or even in the Gulf of Oman, which is deeper at over 3,000 meters in depth, leading to a state order that Chinese trawlers should stay at least 12 miles away from Iran’s coasts and fish in 200-meter-deep waters. Iran says if it does not fish in industrial quantities, that Oman would. It also claims industrial fishing has trickle-down benefits for small-scall local fishermen.

To keep their turf, commercial trawlers even fire at local Iranian fishermen. Traditional and industrial boats are required to be 10 miles apart to avoid confrontation in the sea, but heavy traffic in the past several years has led to an increase in incidents. There are 11,330 Iranian boats, and another 800 Iranian vessels that lead naval operations in the Gulf waters, forcing some Iranian fishermen to bribe Somali pirates up to $10,000 to fish off the shores of Africa.

Iran could be more proactive in resolving these issues. In 2021, it assumed the chairmanship of the World Association for Waterborne Transport Infrastructure (PIANC), an international organization dedicated to improving the technical, economic, and environmental issues in navigable waterways. This might encourage it to push industrial fishing into the deeper waters of the Indian Ocean, and work with Iran’s traditional fishing communities to rebuild local villages and the marine ecosystems.

Banafsheh Keynoush is a fellow at the International Institute for Iranian Studies, a team member at the Carnegie-funded Sectarianism, Proxies and De-sectarianisation Project, a member of the Pacific Council, and Co-Chair of the Middle East Forum at the Commonwealth Club of California. The views expressed in this piece are her own.