Challenges Ahead for Algeria in 2016 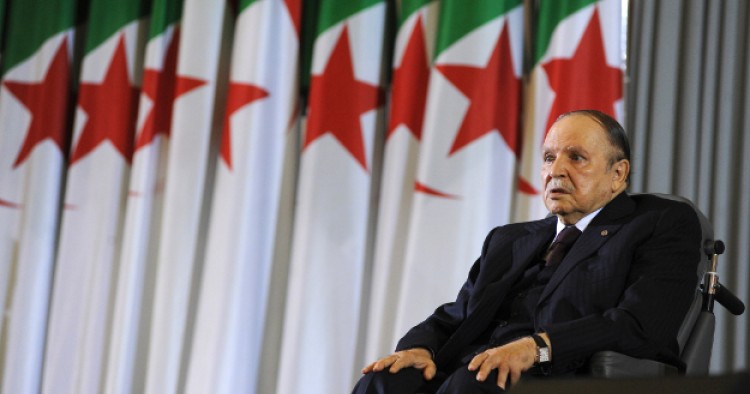 Many used to say that unlike other countries that have an army, Algeria is an army that has a country. As 2016 begins, President Abdelaziz Bouteflika—no mere client of the army—has consolidated his authority and empowered his allies in Africa’s largest nation. However, questions about Algeria's political and economic stability loom large in the new year.

Bouteflika surpassed the expectations of observers by craftily manipulating the presidency-army-intelligence balance to his advantage. In September 2015, he removed intelligence service chief Mohamed Mediene and put one of Mediene's top aides in jail in November, despite Mediene's plaintive complaints to the national media. Bouteflika's patronage of the army’s chief of staff, Gaid Salah, is one key to the president’s ability to strengthen his power. His assertion of control over the National Liberation Front (FLN) and the National Rally for Democracy (RND) gives his partisans great scope over economic and social policy.

A prominent group of national figures in November joined to demand to meet Bouteflika to discuss political and economic issues, but Bouteflika has ignored them. When the head of the far-left Workers Party, Louisa Hanoune, slammed government proposals to privatize part of the state-owned enterprises' capital, a media outlet close to the government in December ran stories of corruption among the Workers Party leadership. In response to the party chief's complaints, industry minister Abdeslam Bouchouareb sneered that General Mediene was no longer able to protect her, touching publicly on the common knowledge that the political opposition itself often worked with elements of the repressive system for tactical or personal gain.

Still, if Bouteflika politically is at an apex, his health is infirm, and the unresolved succession question hovers in Algeria's political foreground. Some Algerian political observers assert that Bouteflika's health is so fragile that he doesn't govern, and that a group of associates, including his brother Said, actually runs the country. Perhaps to dispel claims of a "soft coup," Bouteflika himself chaired a meeting on December 29 to approve a constitutional amendment package that will be put to a parliamentary vote this month. It is widely anticipated the president will have his allies in the FLN and RND push through the changes, which will likely include a vice president to ensure a smooth succession. Names like Ahmed Ouyahia, the president’s chief of staff, and Prime Minister Abdelmalek Sellal and even Salah circulate, but no decision seems certain. The delay in pressing ahead with constitutional reform, after two years of discussion, means there is still not full agreement within the opaque ruling circle about how to go forward.

While the president and his allies procrastinate about the succession, falling world energy prices preclude the government shielding the population indefinitely from austerity. According to government data, Algerian energy exports, which represent about 95 percent of total exports, were only $34 billion for the period of January-November 2015, down from $59 billion in the same period of 2014. Non-oil exports also declined by almost a quarter in this period, showing how far the government has to go to boost private investment and economic competitiveness.

At the heart of Algeria's economic frailty is the sustained distrust of the private sector and decades of dependence on the oil and gas sector. Bouteflika has urged his economic team to find ways to attract more investment, such as offering tax incentives. But no grand policies to entice foreign capital have come to fruition. In response to opposition criticism in November of a limited opening of shares in state-owned enterprises, Finance Minister Abderrahmane Benkhalfa highlighted that investment projects with foreigners still require a minimum Algerian ownership of 51 percent. In addition, the government is instituting in 2016 new, more restrictive licensing requirements for foreign trade and services. The Heritage Foundation recently rated Algeria next to last in the Middle East/North Africa region for economic freedom, labeling the economic system as "repressed".

In such an economic climate, it is hard to see how Algeria will generate large amounts of foreign investment in labor-intensive, economically competitive companies. If the private sector keeps hesitating, the government won't be able to fill the gap since it already faces a budget deficit that in 2015, according to the World Bank, reached 11.5 percent of GDP. The government has announced a hiring freeze in most parts of the public sector, which already accounts for 60 percent of employment. The question of how to generate more investment and jobs is not new in Algeria, but it is becoming more urgent: unemployment officially is 10 percent and rising, with a quarter of the sensitive 16-24 age group out of work.

The World Bank has also noted that inflation is rising along with unemployment. The opposition and even some pro-government FLN deputies made a loud show of rejecting the 2016 budget for effectively cutting subsidies on energy products like gasoline and electricity. The finance minister had warned that food subsidies on milk, sugar and cooking oil would be phased out in the next 1-3 years, replaced by a more targeted aid program. Rising unemployment and subsidy cuts will be hard to manage, but budget restraint is essential as Algeria's long-vaunted foreign exchange reserves are diminishing. By December 2015, they had fallen to $151 billion, down from $179 billion a year earlier. Benkhalfa in December warned they would likely drop to $120 billion by the end of 2016.

While lower, these reserves would cover almost two years of imports. Algeria is not in the same mess it confronted in 1988-90; it still has a window to launch ambitious reforms, finance careful social safety net policies and make its political system more transparent and accountable. However, the delays in setting up a process to manage Bouteflika's succession, and the absence of dialogue between the presidency and the opposition don't suggest a bold change is imminent. Likewise, the Algerian opposition frequently criticizes government policies, but has yet to put forward realistic alternatives. This drift is Algeria's greatest challenge as the window for managing urgent political and economic reforms slowly but surely narrows.