Child soldiers and the YPG 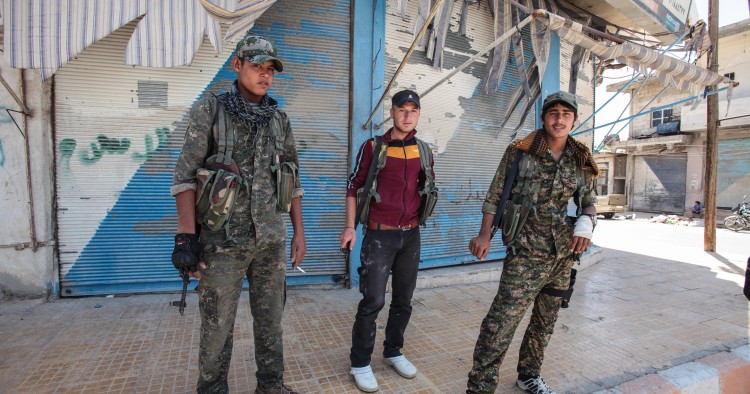 The use of child soldiers is a grave human rights violation. Accusing a faction of exploiting this particularly vulnerable group is an effective way of demonizing both political and military opponents. There is no doubt that minors are fighting in the ranks of the People’s Protection Units (YPG), a Syrian Kurdish militia that controls most of the country’s northeast, but just how widespread is this phenomenon?

After Human Rights Watch (HRW) condemned cases of underage boys and girls fighting in the ranks of the YPG in 2014, headlines suggesting a systematic use of child soldiers made the rounds. Four years later, in late 2018, HRW's findings were supported by a UN report noting that the YPG’s use of boys and girls in combat roles increased sharply in 2017 and early 2018. However, such accusations must be put into context with regards to what international law says and the actual practices on the ground.

Much has changed since the accusations were first aired in 2014. The YPG has endorsed an agreement with Geneva Call, an NGO pushing armed non-state actors to adhere to international humanitarian norms and to keep minors away from combat. According to data collected by Geneva Call, the YPG has made credible progress in implementing the agreement.

But plenty of problems remain.

When it comes to the use of child soldiers, there is one treaty that the YPG’s policy is usually measured against: The Optional Protocol to the Convention on the Rights of the Child on the involvement of children in armed conflict (OPAC). Adopted in 2000, OPAC has emerged as a standard endorsed by most UN member states. Under the agreement, national armed forces are allowed to recruit persons who have attained the age of 15 as long as they do not take part directly in hostilities.

But what about non-state armed groups like the YPG? According to OPAC, such groups are not allowed to recruit persons under the age of 18. This double standard is not surprising given that OPAC is the product of negotiations between nation states, which naturally reject the existence of non-state armed groups in general. With regard to the YPG, OPAC is clear: As long as one does not recognize the so-called Democratic Federation of Northern Syria as a state-like entity, the YPG, as its military arm, is barred from recruiting minors.

While the YPG has not endorsed OPAC, the Kurdistan Workers’ Party (PKK), to which it is closely linked, backed Geneva Call’s Deed of Commitment for the Protection of Children from the Effects of Armed Conflict in 2013. By signing the document, the PKK has pledged to ensure that all those between the ages of 16 and 18 will be separated and kept away from combat zones. These commitments were echoed by the YPG, which signed the document a year later. However, the YPG included a caveat: While it would refrain from recruiting children as fighters, it still would accept those aged 16-18 as members. Four years later, in June 2018, the YPG pledged to raise the minimum age for membership to 17.

Subsequent statements from the Syrian Democratic Forces (SDF), which are dominated by the YPG, went even further. A press release put out in September 2018 emphasized that all minors would be removed from the SDF’s ranks and only adults could join the organization from now on. These commitments also apply to the YPG, according to Mehmet Balci, head of Geneva Call’s Middle East region. It remains to be seen if the YPG and SDF will turn words into deeds this time, but there is reasonable ground for hope.

In a conversation with the author, Balci expressed relative satisfaction with the ongoing implementation of the agreements endorsed by the YPG in 2014. Especially since 2016, things have gotten significantly better. For three years, Geneva Call has conducted frequent verification visits and organized trainings for YPG and SDF commanders. Since then, the direct participation of minors in frontline combat activities has decreased markedly.

The UN’s 2018 report paints a different picture, however; this was in part because its data was based on OPAC’s definition of “combat roles.” The report notes that there have been 398 verified cases of minors in such roles — including the manning of checkpoints far from active frontlines — between 2013 and 2018, with a significant increase since 2017. But in addition to the different definitions of what constitutes a “combat role,” these numbers also include units affiliated with the Asayish security forces, Self-Defense Forces, and other semi-independent groups. They have to be considered in relation to the enormous expansion of the YPG’s territory and the organization’s larger size as well. Since 2016, thousands of additional recruits have joined the YPG’s ranks. Thus, an increase in total numbers does not necessarily point to a qualitative change in recruitment practices.

However, the problem hasn’t been completely resolved. There are a handful of documented cases of minors who died in combat between 2016 and 2018. One reason for this, according to Balci, is the decentralized process of recruitment, which sometimes means regulations that have been agreed on at higher levels of command are ignored on the local level.

Forms of structural violence are also a factor in the recruitment of minors. In camps for internally displaced persons (IDPs) that host hundreds of thousands Syrians, the YPG and its political wing, the Democratic Union Party (PYD), have confiscated identification documents and prevented civilians from leaving in the past. Many people, including children, are joining the YPG due to poverty, Priyanka Motaparthy, a senior researcher at HRW, told the author. “They are living in IDP camps and can’t leave to get civilian work. Recruitment is often the only way for them to get a salary. Many are joining the YPG voluntarily, but what choices do they have?”

To put the YPG’s policy into context, it is important to note that many national armies recruit minors and run military-affiliated social and educational institutions. This might be perfectly legal with regards to OPAC, but from the YPG’s perspective, it is arguably hypocritical to be measured against principles that national armies do not have to consider.

The Paris Principles are one example of the gap between commitment and reality. These guidelines, which 105 states have endorsed, essentially reject the distinction between the deployment of minors to combat zones and their use in non-combat areas. Instead, they state that any use of minors that could result in them being targeted is prohibited. Yet, many member states, including the U.S. and the UK, still recruit minors, making them potential targets in case of war.

It is somewhat difficult to measure the YPG’s policy against OPAC as the treaty inherits a double standard regarding state and non-state actors that is — depending on your point of view — hard to justify. The same can be said of the Paris Principles, which may indicate a developing norm but are not yet legally binding.

However, the YPG does appear to be working toward the implementation of Geneva Call’s Deed of Commitment for the Protection of Children from the Effects of Armed Conflict. Nonetheless, the involvement of children in the YPG’s youth organizations remains a problem — if not from a legal perspective, definitely from an ethical one — as it is a first step toward preparing children for combat at a later time.

Considering that Syria and the region are in an ongoing state of violence, it is unlikely that minors will be completely sparred from political indoctrination and military preparation. Unfortunately, that holds true for most of the armed factions involved in the conflict, including Turkish-backed rebel factions, Islamists, jihadists, and pro-Assad factions.

President Trump’s decision to withdraw U.S. troops from Syria’s northeast endangers the achievements that have been made. Fearing a Turkish offensive, groups like Yekitiya Cîwanên Rojava, the youth organization of the YPG’s political wing, the PYD, have started to urge young people to join an all-out popular resistance, according to Balci. Faced with an existential threat, the age of potential recruits might be less of a concern than it was when U.S. troops kept a watchful eye on their allies’ compliance.