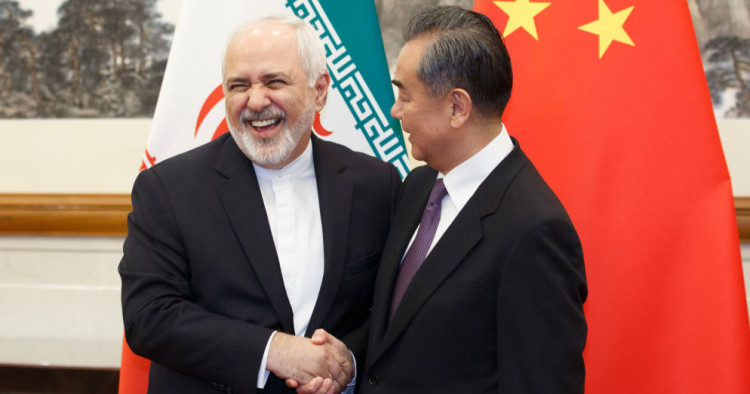 The announcement of the Comprehensive Strategic Partnership (CSP), a 25-year-long economic and development agreement between China and Iran, has immediately added to the intensifying discourse concerning U.S.-China geostrategic competition. Nonetheless, a closer look at its implications suggests that it may be useful in achieving some U.S. goals with Iran, particularly regime modernization.

Many Iranian politicians have been quick to describe the CSP as a warning to the U.S., and U.S. analysts have similarly portrayed it as a means for China to strengthen its influence in the region. While the Gulf media argued that it was the latest indication of America’s disengagement from the region, little has been said about the CSP’s potential impact on the internal dynamics within Iran.

The agreement, dubbed the “Deal of the Quarter Century,” is hardly new, having first been proposed by President Xi Jinping during his visit to Iran in 2016. Moreover, it has faced continuing opposition from some elements within Iran ever since. In particular, there has been much debate over undisclosed parts of the agreement that supposedly include China’s possible use of Iranian military installations, future military cooperation with Iran, possible leasing of Iranian islands in the Gulf, as well as investment in Iran’s transportation infrastructure, including its ports. The fact that the Iranian government has not disclosed the full text of the agreement continues to attract curiosity outside Iran and some resistance within.

Looking at the CSP from the vantage point of the U.S.-China strategic competition discourse, this tends to focus on the impact of maximal U.S. sanctions on Iran’s oil trade or weapon sales and tends to miss what is arguably the main point: that China is attempting to bring Iran into the Belt and Road Initiative (BRI) “family,” and therefore to encourage a sense of “normalization” between Iran and other members of the BRI family within the region to facilitate the movement of goods and financial transactions.

Iran’s new partnership with China can be expected to reconnect it to the world trading system, which will compel Iran to adopt a more market-oriented approach, as China has done, and which may ultimately impact its current revolutionary discourse.

The economic reintegration of Iran through its involvement in the BRI is likely to create a new social and economic drive to refocus its economic interests on prosperity and development, rather than the maintenance of its revolutionary goals. This likely focus on its economy, trade, and infrastructure development is part of wider popular demands that have been subtly but determinedly eroding the authority of both Iran’s government and its revolutionary organizations. Seen in this context, the CSP offers the Iranian regime a potential lifeline at a point when pressure is mounting. Such reorientation could also see policy priorities changed internally rather than externally, thus satisfying a demand that has brought many Iranians to the streets in recent years.

The Chinese one-party model, now including Mr. Xi’s lifetime presidency, has long been favored by Iranians as well. It seems, however, more likely that it is economic modernization that will require further policy changes and could potentially bring Iran closer to global markets and their demand than is the case today. This is likely to require Iran to water down its religious revolutionary discourse and introduce an economic revolutionary discourse instead. Similarly, Iran’s religious leaders may have to come to terms with the fact that the next revolution will need to be an economic revolution, with a plan like Saudi Arabia's "Vision 2030" or the UAE’s "next 50 years’ outlook," which would open Iran to new economic potential. Iran can see in China’s extended hand a way to begin the process of economic liberalization without the concomitant challenges of accepting parallel political reforms — something Iran has been considering for quite a while.

A challenge for the US

The CSP, therefore, poses a challenge for the U.S., regardless of the security aspects of the agreement between Iran and China. The prospect of creating a direct trading link between Iran and China seem likely either to force the U.S. to increase the intensity of sanctions on both Iran and China or to flip the other way and expedite the lifting of "maximum pressure" on Iran rather than trying to increase the pressure on China to comply. Easing sanctions on Iran would allow the U.S. to re-engage with Iran over the Joint Comprehensive Plan of Action and prevent China from becoming Iran’s sole trading partner by enabling European and other countries to buy Iranian oil and to trade with Tehran. In effect, this could expedite the reintegration of Iran into the world trade system. In geostrategic terms, the U.S. might ultimately see the economic liberalization of Iran as a shared interest with China.

The immediate results of such change could be quite turbulent. Iran could do what it did when the Obama administration released $1.7 billion of its withheld cash, which was to support its proxies around the world, fund the creation of new ones in Iraq, and boost old ones in Yemen.

The argument still remains valid that if such short-term challenges can be contained, the longer-term impact of Iran’s economic reorientation and reintegration could give the Iranian regime the opportunity to reinvent itself in a similar manner to China when it launched its “socialist modernization” initiative and secured a second life for a regime that was becoming outdated.

Such a transformation will require a leader of vision, arguably of the caliber of China’s reformist President Deng Xiaoping, and it is far from clear who within the current Iranian political circles might assume such a mantle. Nonetheless, the CSP will likely require the emergence of such a figure who can reinvent Iran as an economic regional player and substitute the current dogmatic rhetoric that has ostracized Iran regionally and internationally.

This approach may seem farfetched and could be challenging in the short run; however, over the longer term, arguably it presents a new way of addressing Iran that is different from the U.S. approach of transactional pressure and possibly closer to the approach the UAE took with Iran during the time of Mohammad Khatami and Akbar Rafsanjani. China’s introduction of its five-point plan for security in the Middle East indicates that its approach to Iran may be more comprehensive, and possibly essential for the economic integration of Iran in the region.

As vague and non-specific as the Chinese new diplomatic approach to Middle East may seem, it could offer a new approach to addressing the chronic challenges of Iran.

Mohammed Baharoon is the director-general of the Dubai Public Policy Research Center. All views expressed are his own.