China, Islam, and New Visions of the Old World 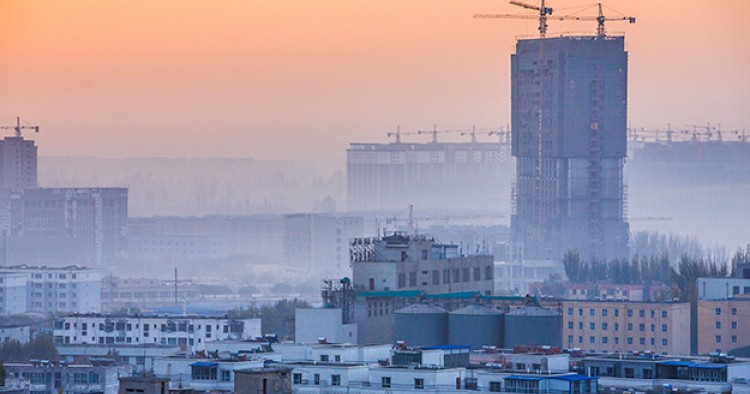 China is steadily reshaping the world’s political and economic landscape by connecting Europe and the Pacific through a series of transcontinental and transoceanic networks that will run across the major Islamic countries of Asia and Africa. The slogan that Beijing uses to promote these projects—“One Belt, One Road”—is a shorthand reference to the Silk Road Economic Belt (the overland routes through Central Asia and the Middle East) and the Maritime Silk Road (the sea lanes joining the Pacific and Indian Oceans with the Mediterranean).[1] In fact, even these grandiose labels understate the true magnitude of China’s ambitions; the total number of planned mega-networks is not two, but seven—and still counting.

The overland connections comprise two routes, one to the north of the Caspian and Black Seas, and another to the south. The northern branch crosses Central Asia, Russia, and Eastern Europe while the southern branch passes through Iran, Turkey, and the Balkans. Each route bundles new railroads, highways, pipelines, power plants, dams, mines, and industrial zones designed to spread economic development and integrated markets throughout the Central Asian and Middle Eastern heartlands of Eurasia.[2]

The maritime passages also follow two paths. They connect the Pacific and Indian Oceans through Indonesia and the Straits of Malacca before splitting into parallel branches on opposite sides of the Arabian Peninsula. The eastern path approaches the Mediterranean from the Persian Gulf, and a western route circles the Gulf of Aden to the Red Sea and the Suez Canal. Both of these transoceanic routes offer new transshipment hubs, free economic zones, and deep sea ports with commercial and military uses. They also intersect with land routes and pipelines to Xinjiang and Yunnan that will circumvent the maritime chokepoints putting China’s vital imports at the mercy of the American Navy.[3]

But there is more. Chinese planners also envision two great routes for Africa. They want to create an overland bridge between the Indian and Atlantic Oceans by building a network of railroads, highways, and pipelines stretching from Tanzania to Angola. A northern branch from Kenya and the Great Lakes region to South Sudan would allow oil exports to flow directly to the Indian Ocean, avoiding bottlenecks in Khartoum and the Gulf of Aden.[4] To the south, the long maritime route around the Cape of Good Hope would handle new supertankers that are too large to pass through the Suez Canal. This increased traffic would turn the South Atlantic into a major zone of naval competition at the same time that several nations are also sending more warships into the Indian Ocean and the Western Pacific. Brazil’s decision to build a fleet of nuclear submarines is a direct response to the prospect of commercial and military congestion near its oil-rich coasts.[5]

This still isn’t the complete picture. A seventh route is expected to appear in the Arctic Circle as global warming opens navigable polar passages between the Pacific and the Atlantic. The fate of these waters and of their considerable subterranean resources rests with the Arctic Council—an evolving treaty organization of the eight nations that adjoin the polar zone.[6] But many distant countries also have a stake in governing this region because of its likely impact on their economic and security interests. China and several other Asian nations have managed to win seats in the Arctic Council as non-voting observers. China has been particularly adept at pressing Asian interests by courting the council’s weaker group of “non-coastal” states—Sweden, Finland, and Iceland—and by horse trading with the stronger group of “coastal” states—Canada, Russia, the United States, Norway, and Greenland-Denmark.[7]

Viewed in this larger context, China’s version of the New Silk Road is not just another Eurasian project on steroids. A more accurate description would be an Afro-Eurasian, Pacific-Atlantic, Mediterranean-Arctic vision of an Eastern Hemisphere that is gradually recovering its historic position at the center of the world. Metaphorically, we might think of the New Silk Road as a New Mediterranean, but its proper name is the Great East and not merely Eurasia.

Much of the allure of Silk Road symbolism lies in its romantic promise of harmony and equality among races and religions with ancient histories of warfare. The most enduring meaning of the Silk Road is not a place but a dream—and a quest to realize that dream through relentless efforts of civilizational exchange and integration.[8] Hence, the paradox of Silk Road scholarship exists in describing a place that never was or never lasted[9] while nurturing a humanist vision that never dies and never comes to life.[10]

China hopes to use the slogan of One Belt, One Road as a far-reaching instrument of soft power. For Great Power competitors, it reinforces the message of “peaceful development,” insisting that China will shun the aggrandizing precedents of European colonialism or of German and Japanese militarism. For emerging nations that might be suspicious of a potential Chinese hegemony, it holds out the promise that all boats can rise together in a China-led tide of progress and prosperity.[11]

In this manner, the ideology of Silk Roadism might seem to be just the branding strategy needed for a vulnerable trading nation that is bound to become even more exposed as its vast overseas interests expand still further beyond its meager military capacity.[12] Seriously overextended on many fronts, China’s leaders need to buy time for self-strengthening at home—time they already have decided to invest in assuming greater risks around the world.[13] But here is the rub: even if Beijing can avoid a war, it cannot win by assuaging only the United States and its frightened neighbors. China still faces a growing credibility problem throughout Asia and Africa, including the Islamic world.

Muslim peoples and nations have their own dreams of resurgence and global influence. They won’t tolerate for long being treated as the lands in between, as stepping stones for stronger neighbors, or as backward cousins needing light and guidance from afar. Chinese diplomats and scholars are fond of touting the “inclusive spirit” they claim the One Belt, One Road agenda will cultivate with other non-Western cultures and particularly with Islam.[14] In reality, China risks not being inclusive enough in sharing wealth and power with postcolonial societies that also view themselves as emerging forces and heirs of unfinished revolutions who are ready to claim their rightful status in world affairs.[15]

Like most people around the world, Muslims measure China’s intentions toward them against Beijing’s treatment of its own citizens, including the ethnic and religious minorities in the borderlands. Slogans of soft power do not match the migrant waves and iron fist technique evident in China’s governance of its western regions—the very lands billed as gateways to Eurasia and the Islamic world. Why should Muslims in Kabul and Kano expect China to fulfill their dreams when Beijing crushes similar hopes in Kashgar and Hong Kong?[16]

Blowback from Exchanges with Distant Lands

The skepticism and dissonance generated from China’s Afro-Eurasian encounters are reverberating across the Chinese mainland. Chinese media is filled with sharp debates over ethnic and religious policies,[17] cultural and class conflicts among disparate Han communities,[18] and quasi-federalist solutions to regional divergence.[19] All of these quarrels contribute to the looming battle over political reform threatening to split the ruling elite at its core: a debate on whether the party-state should try to fashion a more competitive system and open society even if it destroys its privileges along the way.[20]

Hong Kong is the new flashpoint for democratic revolution, but there are scores of budding Hong Kongs all over the mainland, and it’s becoming harder for China to isolate them or suppress them one by one. Beijing already spends more on domestic policing and censorship than on national defense[21]—an odd predicament indeed for leaders so eager to wrap themselves in the soothing tones of soft power rhetoric.[22]

China’s leaders are fashioning mega-networks and mega-regions at home and abroad, and they are bound to transform one another in ways we can scarcely imagine. Transcontinental and transoceanic systems are co-evolving in ways that political and economic monopolists cannot predict or control. This is bad news for entrenched elites in every quarter regardless of nationality or ideology. There’s little doubt that China will continue to change the rest of the world for decades to come. But can it truly expect to do so without changing itself as well?

[1] For the official announcement of the projects, see “新丝路 新梦想” 特稿:世界如何共赢(The Script of “The New Silk Road Dream”: How Will the Whole World Win?), Xinhua, May 15, 2014; for current updates, see the dedicated website at http://www.xinhuanet.com/world/newsilkway/index.htm.