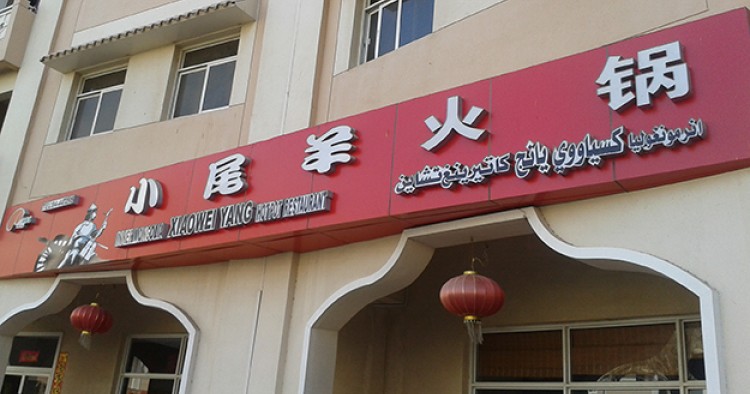 The Confucius Institute of the University of Dubai is housed in a building named Masaood, a tall structure found off a dusty roundabout about two miles west of the airport. On the day I visit, the UAE is observing National Day, and near the building’s entrance Emirati flags wave in wind smelling of the grilled meat being served as part of a nearby celebration. Up on the fifth floor, where the Institute is housed, signage is in both Arabic and Chinese. Students learn various levels of Mandarin in pristine classrooms.[1]

China has partnered with universities and other educational institutions around the world since 2004 to create Confucius Institutes. More than 440 now exist in 106 countries.[2] The one at the University of Dubai, founded in 2011, was the first in the Gulf; there are now three in the Gulf Cooperation Council (GCC), including another in Abu Dhabi and one in Bahrain. While their main mission is to teach Mandarin—the Dubai institute teaches more than 50 students per year—the institutes also hold cultural events, offer courses on such topics as Chinese medicine and kung fu, and organize exchanges.

Confucius Institutes are perhaps the most visible element of China’s “soft power” initiative, a strategy publicized by former President Hu Jintao in a 2005 speech in which he called for “enhancing culture as part of the soft power of our country.”[3]

This cultural strategy is ostensibly meant to complement China’s already robust economic rise. China’s economy has been growing for decades, and after 2003 its annual growth hovered around 10 percent—“one of the most rapid economic ascents in history,” notes the Wall Street Journal. While the country’s annual growth has recently slowed to around 7 or 8 percent, its position as a financial dynamo has been established.[4]

Joseph Nye coined the term “soft power” in the late 1980s and defines it as “the ability to attract and persuade…Hard power, the ability to coerce, grows out of a country's military and economic might. Soft power arises from the attractiveness of a country's culture, political ideals, and policies.”[5] Over the past years, as China has “risen” and put forth a strategy for winning hearts and minds, journalists, analysts, and scholars have debated the idea of Chinese soft power.

Josh Kurlantzick, for example, argued in 2006 that China uses a “broader idea of soft power…soft power implies all elements outside of the security realm, including investment and aid.”[6] He maintains that this use of (broader) soft power has served as an effective “charm offensive” for China, though he notes that China’s soft power has limits when it “runs up against [the country’s] hard power ambitions”—such as its claims to large areas in the South China Sea.[7] David Shambaugh contends in his 2013 book, China Goes Global: The Partial Power, that China’s international reach, while increasingly broad, is nevertheless shallow—with “little soft power, if any.”[8]

And Henry Kissinger, in 2011’s On China, writes of how in “traditional” China, the pursuit of power—hard power, not soft power—was often through subtle coercion or persuasion rather than brute force: “Where the Western tradition prized the decisive clash of forces emphasizing feats of heroism, the Chinese ideal stressed subtlety, indirection, and the patient accumulation of relative advantage.”[9] Thus Kissinger’s work seems to point to Chinese power as a whole as soft, or at least softer than Western power. While Kissinger allows that “modern” China approaches power differently, he argues that one must have a “basic appreciation” of the “traditional context” in order to understand China’s present-day diplomacy and global role.

This look at Chinese soft power in the Gulf adheres more to Nye’s interpretation in that it is principally concerned with cultural materializations of Chinese power. Whether Kissinger’s description applies in regard to China’s “patient accumulation” of power via cultural endeavors remains to be seen. Most contemporary accounts of Chinese soft power, in terms of cultural pursuits, point to its weaknesses rather than its strengths.

Chinese soft power often draws on the country’s history rather than on contemporary culture. The name of the philosopher Confucius, for instance, who lived in the fifth and sixth centuries BCE, was given to the institutes that would teach the world about Chinese culture and language. Confucian philosophy maintains that there is a basic order to the universe and a harmony that connects humans, nature, and heaven. “Confucius was concerned more with the cultivation of social harmony than with the machinations of power,” writes Kissinger. The Institutes are thus identified with the idea of China as a place that stresses unity and peace—including in terms of international relations.

Such a label was carefully chosen vis-à-vis the goal of the Institutes, says Yun Sun, a fellow with the East Asia Program at the Stimson Center in Washington, D.C. “The issue of soft power, in the Chinese context, originates from a belief that the world is suspicious of China’s rise. The thinking goes that if people know China better, they will have a better reaction to China’s foreign policy.”[10]

The content and administration of Confucius Institutes are a very top-down affair, and the work of getting others to “know China better” is thus tightly controlled. The Chinese Language Council International, also known as Hanban, oversees Confucius Institutes. Hanban is governed by a group of high-level state and Communist Party officials who have the right to supply the Institutes’ teaching materials and instructors, as well as appoint Chinese co-directors to individual Institutes.[11]

With such a rigid, constrained structure and a general focus on more serious fare like Chinese history and Confucian philosophy rather than pop culture, some say that the Institutes—and Chinese soft power in general—isn’t “cool” or “fun” (as opposed to, say, Beverly Hills, 90210 or “Gangnam Style”), which easily attract fans. In a 2012 article in China Daily, author Peng Kan argues that because “cultural products without entertainment value rarely become popular in overseas markets,” China’s focus on “China’s ancient civilization” and “current economic development” makes for a soft power downer.[12]

Nye lamented China’s weakness regarding soft power for different reasons, declaring that China’s crackdown on freedom of speech and expression means that “there is little international audience for [its] brittle propaganda.”[13] This critique is one often found in the United States and other Western countries, and has even resulted in the closing of two American Confucius Institutes, at the University of Chicago and Penn State University. University of Chicago Professor Marshall Sahlins, in a piece for The Nation, noted that “Hanban is an instrument of the party state operating as an international pedagogical organization.”[14]

But while Confucius Institutes in the West may be coming under such scrutiny and shuttering, the organizations occupy different roles depending on the country in which they are located. Though U.S. universities may find the Institutes controversial in their ideology and practices, the branch in Dubai appears to smoothly serve the functions of fostering business ties and monitoring Chinese immigrants.

Back on the fifth floor of the Masaood building in Dubai, a Level 2 Mandarin class is in progress. The instructor teaches the students to say “When is your birthday?,” and they query and answer each other. The class then sings the seemingly universal “Happy Birthday” tune (in Chinese) before turning to school-related vocabulary like desk, dictionary, and schoolbag.

At the break, the students tell me their reasons for learning the language. Maryam, an Emirati, works in tourism in Fujairah and drives three hours three times a week to attend the class. “After 10 years, Chinese will be the most useful language for tourism,” she says. Mohammed, an Emirati police officer, inspects Chinese shops at DragonMart, a massive mall (in the shape of a dragon) proffering Chinese goods, and elsewhere in Dubai. “Most Chinese here don’t speak English or Arabic,” he says. “When I give them a fine, there’s no excuse—they have to understand if I speak Chinese.” And Huzaifa, whose background is Yemeni, says he’s learning the language for business reasons. “My dad and I have a building materials business here,” he says. “One hundred percent of my imports are from China, so it’s better if I know the language.” The pupils’ stories indicate the oft-mentioned reasons for enrollment at the Dubai Confucius Institute: business, tourism, and policing the growing number of Chinese immigrants in the Emirates.

Hemmat Lashin, an Egyptian based in Dubai who is the former co-director of the Institute, told me that the Institute’s mission is to provide language and culture classes for these purposes as well as to promote understanding and friendship between China and the UAE. “I think we are thirsty for soft power,” she said. “We don't want bombs and wars.”

Lashin also stressed the economic relationship between the UAE and China. “Everything is made in China,” she said. “This is another form of power. The two most famous sentences in the world are ‘I love you’ and ‘Made in China,’” she laughed. “And what is the problem with needing food products from you and oil from me? Everyone wants to give something and get something in return.”

This practical outlook can be detected in the comments of some analysts regarding the Dubai Confucius Institute. While Exeter University Professor Tim Niblock notes that Confucius Institutes in the Gulf are “symbolically important,”[15] Jon Alterman of the Middle East Program at the Center for Strategic and International Studies (CSIS) assigns them a more active function. He says that one of the challenges China faces as it expands its commercial ties in the Gulf is the small number of people with whom it can interface. “This intermediary role, a kind of Dragoman, is very hard to find in the Middle East,” he said. “China would like to cultivate people who can work in Chinese, who are comfortable with Chinese people, and who can be guides in local business opportunities.”[16]

Whether China’s soft power initiatives are successful on a global scale is questionable, but in Dubai, outreach via the Confucius Institute appears to be working in a small and practical way by not only furthering cordial ties between the countries, but by helping China to secure Emirati citizens and business leaders with whom it can easily work—and these individuals seem eager to accommodate, as well as to keep a more informed eye on the growing Chinese community.