Collection Spotlight: The Arabian Frontier of the British Raj: Merchants Rulers, and the British in the Nineteenth-Century Gulf 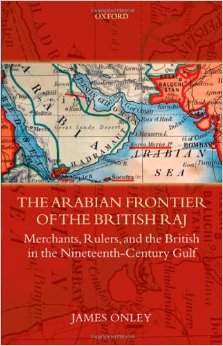 James Onley’s The Arabian Frontier of the British Raj: Merchants Rulers, and the British in the Nineteenth-Century Gulf (Oxford University Press, 2007) is a detailed and in-depth study of the realities of British imperialism along the eastern coast of the Arabian Peninsula. The work demonstrates how imperialism manifested itself in different forms depending on the location, and the reasons why local rulers and merchants chose to collaborate with British Indian imperial officials in establishing the Pax Britannica in the nineteenth-century Persian Gulf. Using an extensive range of primary sources, including private merchant papers in the Gulf, interviews with merchant and ruling families, and British government records in London, Onley paints a fascinating picture of how in his words, “non-Britons helped run the British Empire.”

Onley’s carefully analyzes these sources to reexamine existing assumptions about Britain’s Indian Empire. He points out that the historiography of the area is one of frequent debate and much discussion due to its somewhat unique experience with colonial rule. He notes, for example, that the rulers of the Gulf sheikdoms had numerous incentives to accept British protection, first among them the security afforded by the British navy against pirates and rival rulers. He also examines how the British Indian government recruited Arab, Persian, and Indian merchants to serve as its representatives in the Gulf, overseeing and facilitating the Pax Britannica. Indeed, most of the local diplomatic work in the Gulf was handled by these non-Britons.

Onley’s research also clearly exposes the role of racism on the frontiers of the British Raj. Locally-recruited political representatives were paid a fraction of their British counterparts, they were sometimes discriminated against by the British, and some local rulers objected to the appointment of Hindu merchants as agents.  The British eventually stopped employing local representatives, sending instead British agents by the early twentieth century.

The book provides a fascinating glimpse as to how a delicate imperial balancing act compelled British India to downplay its presence in the Gulf through the use of local representatives. Not wishing to provoke the Russians, but still concerned about Ottoman decline, British India, despite taking effective control over the Gulf sheikdoms, never formally declared its protectorate over Eastern Arabia. While Parliament may have boasted about how the sun never set on the British Empire, this was one region that they preferred remain in the dark. To illustrate this contrast, Onley quotes both a British Foreign Office memorandum and the famous Lebanese author, Ameen Rihani. The Foreign Office memo notes that “she [Great Britain] has at no time enjoyed, or even asked for, territorial acquisitions in those regions… she has kept the peace amongst people who are not her subjects.” Rihani, agreed with this statement, noting that “security and peace, England has brought to the Arabs of the Gulf,” but, he disputes the idea that Britain did not control the area. He opines that “the Gulf should be renamed: it is neither Persian nor Arabian, it is British.” Onley effective juxtaposes these two quotes to show the somewhat complicated nature of British India’s control in the Gulf, an arrangement that ultimately survived much of the rest of the British Empire.

This book provides an important glimpse into a part of the British Empire that is not normally discussed, and the role played by the people living in that area. Onley is precise and vigilant in citing his sources, and thoroughly explains the thought process behind his new findings. His use of local sources, including local family histories, means that there are a variety of new findings within the book. His analysis and examination of Britain’s “informal empire” in the Middle East helps explain the nature of the current relationship between the Gulf Arab states and Britain today. This work also contains an extensive glossary of terms used by the British imperial officials in the Gulf and India, a valuable reference for any scholar interested in imperial bureaucracy.

Seafaring in the Arabian Gulf and Oman : The People of the Dhow, by Dionisius A. Agius, 2005.

The Ottoman Gulf: The Creation of Kuwait, Saudi Arabia, and Qatar, by Frederick F. Anscombe, 1997.

Arabia and the Gulf from Traditional Society to Modern States, by Ian Richard Netton,  Muhammad Sha`ban, and Muhammad `Abd al-Hayy, 1986.

The Records of the British Residency and Agencies in the Persian Gulf, by Penelope Tuson, 1978.

The Arabian Gulf States: Their Legal and Political Status and Their International Problems, by Husain M. Albaharna, 1975.