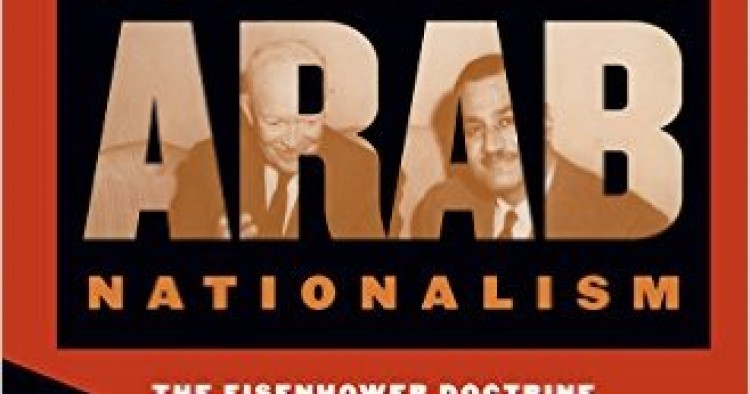 Under the threat of an increasingly influential Communist Soviet Union, in the mid-twentieth century the United States became more and more involved in Middle Eastern affairs. Struggling to reconcile its goals of containment, access to oil, and Israeli security, the U.S. government implemented a historic doctrine that pledged increased economic and military aid to the region in exchange for political allegiance. In his book, Salim Yaqub focuses on the United States’ attempt to contain Arab nationalism during this era due to its concern of a Soviet alliance with Arab nationalist states.

The pan-Arab nationalist movement that arose with Egyptian President Gamal Abdel Nasser sought to unite a divided Middle East. Nasser also espoused a policy of “positive neutralism,” maintaining that the region could capitalize on forging relationships with both the East and the West. The United States, fearful of a growing Middle Eastern power as well as the possibility of a Soviet alliance, sought to isolate Nasser through sending U.S. troops to the region to establish an American presence.

Yaqub attests that this strategy ultimately failed, as the Eisenhower administration underestimated Nasser’s appeal in a region anxious to rid itself of Western influence. This is best exemplified by the the 1958 formation of the United Arab Republic, which was orchestrated by the Egyptian-Syrian Union. In addition, the 1956 Suez War and subsequent loss of British influence in the region saw an ensuing rise of anti-imperial sentiment, further weakening the effects of the Eisenhower precept for years to come.

Yaqub draws from a wide range of Egyptian, British, and American government documents in order to analyze the shortcomings of the Eisenhower doctrine. With extensive research and sharp analysis, the author brings a valuable, regional critique to one of modern history’s most important doctrines.

Containing Arab Nationalism presents a contextualized history of international diplomacy in the years preceding the Cold War and offers valuable insight into the Eisenhower Doctrine and its effects on Arab-American relations. Thoroughly researched, the volume provides a comprehensive account of U.S. foreign policy interacting with Middle Eastern politics throughout the 1950s and beyond.

American-Egyptian Relations during the mid-twentieth century

Soviet Involvement in the Middle East