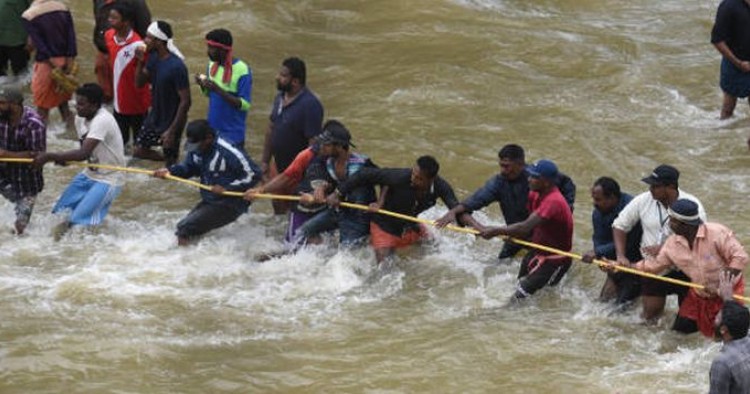 Fragile disaster zones have high vulnerability and pose great risk for human and nonhuman security. Governments around the world have been investing huge amounts of money in obtaining and implanting technology for forecasting and disseminating early warnings. In the process, the use of technology has gradually replaced the central role of the community in efforts to save lives and property. This article discusses the emergence of Early Warning Systems (EWS) as life-saving tools during disasters, with specific attention to South Asia and the Middle East. The central argument is that the potential benefits of such tools can be fully realized only when combined with community-based sources of knowledge and participation, and not when deployed as substitutes for them.

Early Warning Systems (EWS): What They Are and How They Typically Function

Although all countries’ disaster management laws stress the indispensability of sophisticated EWS, many countries have fallen into the trap of investing in expensive technological systems while doing little in the way of public engagement, local governance, and legislation fixing accountability for inaction or inappropriate action before, during, and after disasters. Both the Hyogo Framework for Action (2005-2015) and the Sendai Framework (2015-2030) refer to EWS as an essential tool to save lives during disasters. Nevertheless, the approaches taken to establish EWS have tended to be fragmented, ad hoc and withdrawn from communities and local needs.[1]

Today’s early warning systems (EWS) tend to be technology-centric systems that perform the tasks of appropriate identification, detection, and mobilization of action. However, previously in human history, EWS were community generated — by-products of indigenous wisdom where sage community leaders could predict disasters through the movement of clouds, the colors of the sky, behavior of animals and silence of trees. These leaders moved their tribes and animals to safer places whenever they sensed possibilities of hurricanes, tornadoes, or tsunamis were about to strike. Community elders were repositories of knowledge about ecological history and the interdependence of ecosystems. This wisdom was passed down from one generation to the next, contributing to local communities’ resilience to disasters.

Over the years, community habitats have been disrupted by deforestation, mining, infrastructure expansion into wilderness zones, mobile and high frequency electromagnetic and radio waves. As a result, “natural signals” have been obstructed, and community resilience has been weakened. In the modern world, many of the resources that helped communities resist fatal calamities — mangroves, bamboos, house building materials, specific types of tree leaves to contain forest fires or grasses to produce smoke which prevented the spread of epidemics — are being lost.

In recent years, laboratory-based EWS (LBEWS) have emerged to compensate for this loss. LBEWS attempt to absorb as much meteorological and geospatial information as the most sophisticated remote sensing and satellite imagery will allow. Yet, although these technologies have provided the basis for warning the public of impending disasters, they have often led to inadequate disaster responses. Translating valuable scientific information into readable and understandable warnings and alerts to be immediately relayed to the field administrative agencies has proven difficult. The expectation that field agencies will spring into action — engaging with local communities and supporting institutions and rehabilitation centers — too often has not been met. Insufficient emphasis has been placed on the need for administrative agencies to prepare or conduct advance planning based on warnings of impending disasters.

Some of LBEWS’ shortcomings were, sadly, on display recently in Kerala, which is still reeling from the worst floods it has experienced since 1924 and whose most visited tourist destinations of Athirapally, Ponmudi and Munnar witnessed unprecedented destruction. Although Kerala, India’s most developed state, had invested heavily in installing an elaborate LBEWS, 289 of the 351 radio-based communication units for ensuring effective warning were found to have failed to work due to poor maintenance, lack of administrative oversight, and an insufficient number of trained personnel to operate the system. Post-disaster assessments also have revealed instances in which state officials charged with deciphering scientific warnings issued from laboratories lacked the local knowledge that would have equipped them to respond appropriately.[2]

It is important to emphasize that EWS is a governance tool, and not simply a technology. Harnessing EWS to its intended purpose — saving lives and property — requires bringing together into a network all stakeholders prior to the disaster. To be sure, the effectiveness of EWSs depends heavily on the capabilities of administrative systems and the leader at the helm. However, participatory local governance is equally important, if not indispensable in building trust and overcoming gaps between science and non-science administrative institutions and local community institutions. This is the test which fails most governments in implementing early warnings.

EWS in South Asia and the Middle East

South Asian and Middle Eastern governments have devoted substantial resources and have made significant strides in developing early warning systems (EWS). India is a case in point. Pursuant to the 2005 Disaster Management Act, India has established a structure to work on developing a streamlined EWS. The Indian Meteorological Department (IMD) — the key institution for issuing EWS in floods and cyclones — has developed a multi-stage cyclone warning system. Once detection takes place, the IMD issues a cyclone-alert bulletin.[3] India has also made advances in the development and deployment of the aircraft meteorological data relay system, the cloud motion vectors (CMVs) and the very high-resolution radiometer (VHRR) payload onboard INSAT–2E to provide water vapor channel data.[4]

Nepal is one of the most disaster-prone countries in Asia. This small nation tucked among the Himalayas sits atop a major geological fault line, which suggests that it is likely to face many more disasters in the years to come. Following the devastating earthquake in 2015, which killed more than 8,000 people and severely affected more than eight million, the 10th Disaster Management Program was put in place to ensure that flood and earthquake forecasting systems are more community based. The district-level agencies maintain electronic display boards with sirens that sound automatically when water reaches warning levels. A web-based telemetry system generates SMSs, text messages and understandable warnings to Chief District Officers for immediate action. The International Centre for Integrated Mountain Development (ICIMOD) is working on the regional flood information system in the Hindu Kush Himalayan region (HKH-HYCOS), which is adapted to the World Meteorological Organization’s (WMO) model of World Hydrological Cycle Observing System (WHYCOS).[5]

Severe cyclone- and flood-prone Bangladesh has been supported by The Regional Integrated Early Warning System for Africa and Asia (RIMES) in setting up an EWS. In 2005 the ESCAP Trust Fund for Tsunami, Disaster and Climate Preparedness, with a $10 million contribution from Thailand and another $2.5 million from Sweden and later joined in by Nepal, Philippines and Turkey, had helped establish RIMES in collaboration with the Asia Disaster Preparedness Centre. In 2015 Bangladesh worked with the help of the World Bank to modernize the country’s meteorological and hydrological information system, including weather forecasting, early warning systems, and delivery of weather and climate services. With the setting up of Agrometeorological Information System, Agromet Information Kiosks and display boards at the local governance level, the government enabled 30,000 farmers to receive EWS messages and ensure protection to their productivity and national developmental plans.[6]

Turning to the Middle East, Israel has made notable progress in developing EWS systems. Israeli authorities have engaged with communities to explore simple options such as placing gas balloons at safe places for evacuation where they can be easily spotted. The Canadian company Nanometrics has installed an EWS on earthquakes that issue a 10-30 second alert between the initial and subsequent waves. Israel has also been installing sophisticated monitoring stations in three earthquake-prone areas — the Dead Sea Valley, the Jordan Valley and the Haifa area.[7]

The United Arab Emirates (UAE), too, has introduced sophisticated, well-coordinated mobile early warning systems. The country’s National Emergency, Crisis and Disasters Management Authority (NCEMA) has officially launched the first stage of its “National Early Warning System” by adopting a unified electronic system to send warning messages to the public through telecommunications networks. The integrated functioning, efficiency in simplicity, and speed has greatly benefited the Abu Dhabi police, which depends on EWS for managing many concerns of governance and safety. According to Dr. Jamal Mohammed Al Hosani, Director-General of NCEMA, this accomplishment, which is the first of its kind in the region, reflects strong leadership, effective collaboration between government agencies, and a common commitment to enhance the country’s stature and reputation in an international community.[8] NCEMA’s plan currently relies upon multiple methods of broadcasting warnings, including radio, television, unified Adhan (calls to prayer) in mosques, and smart tablets.

The 2009 Jeddah floods — one of Saudi Arabia’s most catastrophic disasters — remain fresh in the consciousness of Saudi officials and the public alike. A post-disaster study[9] concluded that the Saudi government lacked a clear policy and the technology needed to respond speedily and effectively to the disaster. Another study[10] found the Saudi government to have been ill-prepared to respond to swarms of small earthquakes that struck Harrat Lunayyir in the northwest part of the country, also in 2009. Upon the release of these findings, the government of Saudi Arabia sprang into action. The Directorate of Civil Defense adopted an EWS prepared through research conducted at the King Abdulaziz City for Science and Technology and began installing thousands of warning sirens throughout the country. The American Signal Corporation (ASC) subsequently designed a large-scale multi-threat, multi-channel early warning system in Saudi Arabia, which is being installed in the Eastern Province. Firms such as the Next Millennium Telecom Co (Nextel) are coordinating EWS efforts in other vulnerable provinces of the country.[11]

In South Asia and the Middle East, as elsewhere, governments are increasingly turning their attention to and investing substantial sums in the development and deployment of early warning systems (EWS). To some extent, these invigorated efforts to save lives have come as the result of undeniable evidence of past failures and neglect. The progress made in efforts to save lives should not be measured solely by the heightened attention by senior leaders, increased level of priority and financial investment, or application of sophisticated technological “solutions.” Even the most advanced technology cannot provide the resilience and protection from natural disasters that communities, particularly those in remote areas, require and deserve. Technology-centric approaches that are delinked or divorced from the communities which they are intended to serve are likely to be poor investments and to deliver sub-optimal outcomes. Governments can, and must do more to learn from, help preserve, and build upon the knowledge and experience of local communities; and to find cost effective, sustainable solutions alongside, if not in place of highly sophisticated EWS systems that are often not readily understood and appropriated by their intended beneficiaries.

[2] For example, when officials from neighboring Tamil Nadu issued the first alert to Kerala that excess water from the Periyar River Mullapperiyar Dam was likely to flow to the Kerala’s Iduki Dam, KSEB Chairman and Managing Director N.S. Pillai as well as the overconfident Power Minister M.M. Mani initially dismissed the warning as exaggerated. When they did open the gate, they unleashed a huge surge flash flood surge that caught most people and even district administrators off guard. Some local community members have alleged that the shutters of the Banasursagar Dam were also opened without notifying district authorities.

[3] This bulletin may be from 48 hrs or less but with enough time for humans and nonhumans to be evacuated to safer locations.

[7] Rinat,Zafrir., “Israel Which Sits on an Active Faultline: To Install Early-Warning System for Earthquakes,” Haaretz, May 29, 2017, https://www.haaretz.com/israel-news/.premium-canadian-firm-to-install-israel-s-earthquake-early-warning-system-1.5478275.