The Continued Descent of Egyptian Media 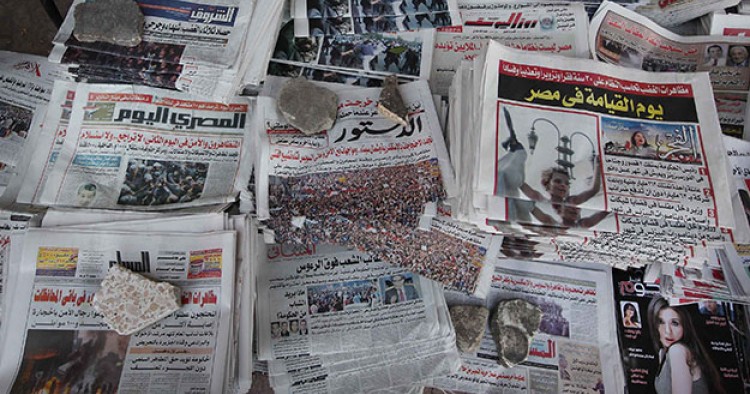 Think of American mainstream media in the aftermath of 9/11 and you might get a general idea of the state of the Egyptian equivalent since the June 30 uprising against Muslim Brotherhood rule—allowing, that is, for less sophistication and a considerably greater measure of crudity. The fluttering flags at the top of television screens, along with variations on the “war on terror” banner, were copied almost identically, if less tastefully, by both state-owned and private Egyptian television stations from CNN, FOX, and the rest.

The triggers may have been vastly different, but it was the same flag waving, frantic patriotism, and warlike mindsets, wherein the best interests of one side take precedence over any other consideration. This includes the unquestioning acceptance of whatever the “leaders” of “our side” churn out in terms of information or misinformation. Saddam Hussein’s nuclear capability and culpability in 9/11 were no more unimpeachable by halfway decent journalism than the alleged caches of chemical weaponry in Rabaa al-Adaweya Square and the claims of U.S.-Muslim Brotherhood collusion and conspiracy.

Yet the respective merits, or lack thereof, in the descent into bad journalism in either of these cases are not our concern here. The point is in the drawn battle lines: it’s hurray for our side and let the devil take the hindmost, regardless of basic standards and ethics of journalism.

On June 30 millions of Egyptians rose up against Muslim Brotherhood rule; their rebellion was supported by the armed forces, the police, and the intelligence bodies, among other organs of state. While there was little doubt in anyone’s mind in the country that the majority of Egyptians supported the overthrow of President Mohamed Morsi and his group, the Brotherhood and their Islamist allies had the support of a fairly sizeable minority of the population that, moreover, was well organized and highly committed.

Thus, on one side, a popular rebellion, unprecedented in scale and intensity and easily surpassing that which had overthrown Mubarak, and on another, a political/ideological movement that had just realized an 80-year old dream, that believed itself chosen by God to fulfill His will on earth, and that is the best organized and financed—if among the least politically savvy—political organization in the country. Add to this the fact that the military, the police, and other state bodies had sided with the uprising, putting their heads on the block in the event of failure, and you have all the ingredients of a life-and-death confrontation.

A contest of this nature might well put the best journalism—the most rooted in sound tradition and institutional sophistication—to harsh test. It would, however, strike an Egyptian journalism that already had been in the throes of deep crisis. To even begin to unravel the salient features of this crisis, a little background is necessary.

For the best part of half a century, Egypt’s media was overwhelmingly dominated by state ownership and control, with private enterprise nonexistent or negligible. The monopoly began to fracture in the 2000s, especially during the second half of the decade. New privately-owned daily newspapers began to emerge, increasingly competing with the giant state-owned news organizations. This was followed by the emergence of private satellite television channels, which in turn—and as the decade was drawing to a close—took viewers away from state-owned television, which had been considerably more government controlled than the print media. State television had also been facing stiff competition from the emergent Arab satellite news channels, most notably Al Jazeera. The Egyptian revolution of January 25, 2011 would drive this process considerably further, yet to this day terrestrial television channels remain the exclusive monopoly of the state.

State media enterprises, both print and broadcast, had in the course of Mubarak’s 30-year rule degenerated into bloated, corruption-ridden, and supremely inefficient dinosaurs, their survival  and the livelihoods of the thousands they employed dependent on state largesse and their monopoly status. Even when faced with steeply declining readership and growing competition from the up-and-coming private dailies, the state-owned print media maintained its grip on a wholly disproportionate segment of available advertising monies, thanks to government meddling.

In fact, one chief editor of a top state-owned news organization was known to shrug off dwindling readership, saying it meant bigger profits, what with the backing of a crony capitalist state guaranteeing the daily some 70 percent of the country’s total print advertising budget, paired with savings on expensive newsprint.

Yet the situation was untenable even before the Egyptian revolution triggered a deep economic recession, which continues to this day and sends advertising revenues in all media, especially print, down the drain. Even the most successful print news organization, al-Ahram, owed billions in unpaid back taxes. The ERTU (Egyptian Radio and Television Federation) was consistently making such huge losses that one media expert suggested that shutting down the gigantic state-owned organization would be sufficient to finance the government’s yawning budget deficit.[1]

Sycophancy and the perception of the journalist as an obsequious servant of the president had become the rule. The chairmen and chief editors of the main state-owned newspapers were, effectively, presidential appointees, often in fierce competition among themselves over presidential favor. In a private conversation with one pre-revolution chief editor, I suggested that the only way to face the competition from privately-owned dailies was to move toward “greater balance.” The answer was droll, if honest: “And you want those sons of … [he went on to name a number of his prominent peers at the head of other state-owned dailies] to malign me with the president?” On the occasion of Mubarak’s last birthday in power, that particular editor published a full-page editorial article under the title, “The Day Egypt was Reborn.”

The sycophancy and bidding wars among top-ranking editors and journalists became particularly embarrassing after February 2011. Come the revolution, with its unsavory habit of changing rulers every few months, the leaders of state-owned media outlets went into a tizzy of shifting allegiances. On the morning after Mubarak’s ouster, the top newspaper in the country, al-Ahram, ran a heroic banner headline proclaiming, “The People Have Overthrown the Regime;” just a few days earlier the paper’s banner headlines, under the same editor, proclaimed unyielding love and support for Mubarak by Egypt’s teeming millions.

Shamelessly, the top journalists in the country would go on changing fawning loyalties with every major change in the post-revolution power structure, from Mubarak to Field Marshal Mohamed Tantawi and his Supreme Council of the Armed Forces (SCAF) to Morsi and his Muslim Brotherhood. (One senior journalist and erstwhile member of Mubarak’s Policies Committee would by the time Morsi was in power explain to colleagues how he’d discovered that, at heart, he’d always been a Muslim Brother.) Now, it’s back to the military, currently led by General Abdul-Fattah el-Sisi, and the fawning is considerably more heated.

For its part, the privately-owned media, which had created a window of dissent and a semblance of professionalism under Mubarak and beyond, has floundered badly in the face of the challenge of post June 30 intense political polarization. It is worth noting that even within the state-owned media, cracks always existed through which the more professional and ethical journalists could make some impact. The post-June 30 polarization has all but sealed those cracks, pushing state- no less than privately-owned journalism into an abyss of frenzied bias and unprofessionalism.

The reasons behind the failure of the privately-owned media are many. Institutionally and financially fragile, these fairly young news organizations, whether print or broadcast, were already suffering from poor management practices, including inordinately intrusive interference by owners. With the bulk of their senior editors and journalists drawn from the state-owned media (for many years, the sole source of journalism in the country), they were not free of the mindsets, perspectives, and prevalent practices that had evolved over decades.

Most significantly, the very role and mission of journalism has remained bound within an authoritarian mindset, wherein the dominant perception is one of “mobilizing” or “guiding” public opinion rather than presenting the public with the truth. A free press is still seen more as a diversity of opinions and media outlets rather than a commitment to balanced and truthful coverage by journalists and their respective media organizations. This has been starkly apparent in the broadcast media, wherein public opinion talk shows have become the single most important source of “news” available to the Egyptian public.

Intense political polarization after June 30, coupled with the bellicose posture occasioned by the severity of the confrontation with the Muslim Brotherhood, did away with whatever diversity had existed in journalism beforehand. Television presenters and anchors have been transformed into overzealous preachers shouting harangues from their various pulpits. Meanwhile, the few exceptionally talented and ethical among them, such as ONTV’s Reem Maged and Yousry Fouda and the enormously popular CBC satirist Bassem Youssef, have disappeared off the airwaves.

For the time being, in print and on television, it’s the season for passionate bias, bizarre conspiracy theories, “deep state” propaganda, and a virtual collapse of journalistic standards. Egypt’s top journalist and most prominent political analyst, Mohamed Hassanein Heikal, put it bluntly in a recent television interview. The Egyptian people need the truth, he said, and they’re not getting it.[2]